The UK's reimposition of quarantine rules on arrivals from Belgium, Andorra and the Bahamas, not long after similar action on Spain, is another reminder of the uncertainties facing airline capacity planners. COVID-19 cases are also increasing elsewhere.

However, the capacity curve in Europe (and most of the other world regions) is showing signs of levelling out, influenced by the uncertainty over travel restrictions. Moreover, capacity plans for the rest of 2020 from leading European airline groups in their recent quarterly reports are more cautious than the schedules they are still filing with OAG.

Total European seat capacity is scheduled to be 16.6 million in the week of 10-Aug-2020, according to schedules from OAG combined with CAPA Fleet Database seat configurations.

Europe's domestic seats have been cut by 27.6% year-on-year (compared with last week's -26.3%). This is now the seventh week running with domestic capacity at more than 50% of last year's.

The 55.0% year-on-year cut in total seats this week is the 21st week of very heavy double digit percentage (more than 50%) declines in seats.

It is only 0.6ppts narrower than last week's 55.6% drop, and the 10th consecutive week of year-on-year cuts at a lower percentage than the previous week.

Europe remains in third place, but is closing in on North America

For the sixth week running, Europe has the third narrowest cut among world regions this week. It is now very close to North America in terms of its year-on-year capacity cut.

Seats are down by 74.1% in Latin America, maintaining the region's position as having the deepest cut. Over recent weeks Africa, whose seat numbers are now down by 67.6%, has widened the gap with Latin America.

The Middle East is only fractionally ahead of Africa, with a year-on-year reduction of 67.3%. Capacity is down by 53.4% in North America and by 42.9% in Asia Pacific.

Asia Pacific has now had five consecutive weeks at more than 50% of last year's capacity. 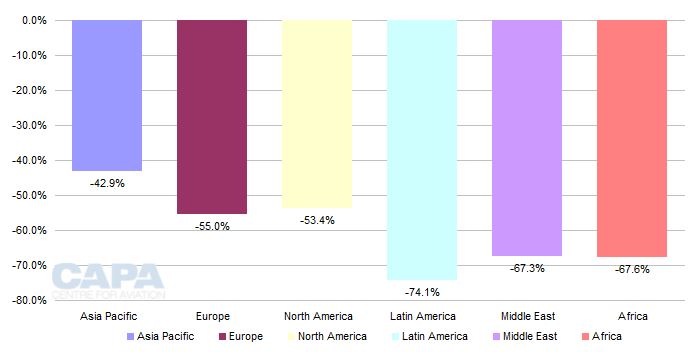 Most regions are levelling out

Year-on-year rates of capacity reduction in most regions have plateaued in recent weeks.

Europe is on the longest unbroken run of narrowing its year-on-year capacity cut, but has also levelled out this week.

Only Africa is still on a clearly upward trend, while Asia Pacific, Latin America and Middle East are taking modest downward steps this week. 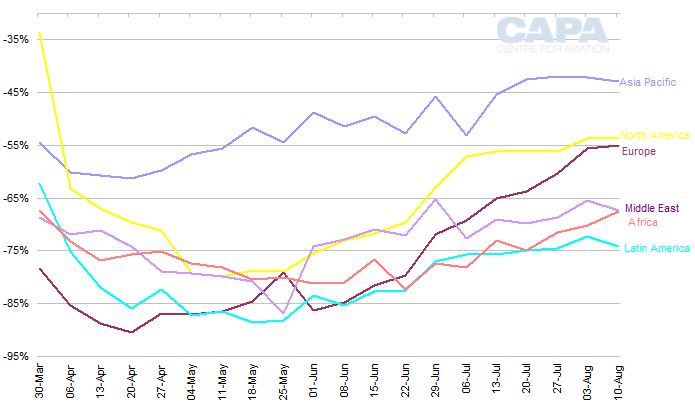 The trend of future schedules being trimmed with each passing week continues this week.

Projected Sep-2020 seat numbers are 6% lower than expected last week and are now anticipated to be down by 37% year-on-year. This is 63% of last year's levels – much more cautious than the 83% projected four weeks ago for Sep-2020, but still quite aggressive.

For 3Q2020 as a whole – normally the peak quarter of the year – European seat numbers derived from schedules filed with OAG are projected to be 49% below the same quarter of 2019, i.e. at 51% of last year's level.

The short term nature of capacity planning, driven by uncertain demand, means that European airlines have not yet even begun to adjust their schedules into the winter season in any meaningful way.

Capacity derived from OAG schedules for Nov-2020 and Dec-2020 is still projected to be down by only approximately 10% year-on-year. This remains virtually unchanged from what was projected last week or any other week over the past two to three months. 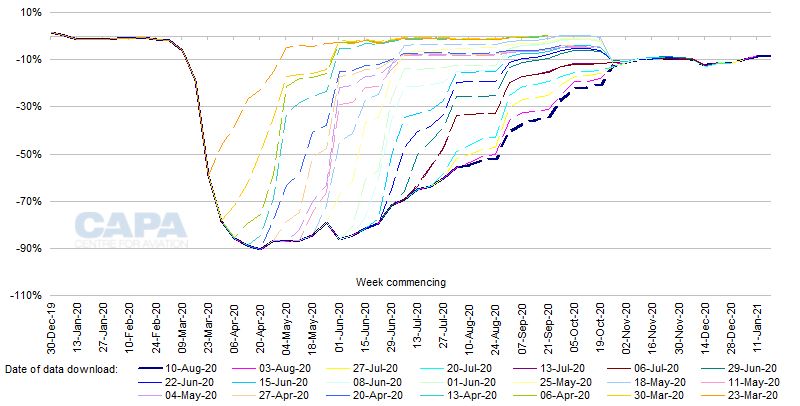 Ryanair and Wizz Air have the most ambitious capacity plans

Beyond the OAG schedules, the best guide to the capacity outlook – at least for the larger airline groups in Europe – is to read what the airlines themselves are saying on the subject.

Ryanair and Wizz Air are ahead of their rivals in their capacity ramp-up. They are betting on market share increases as a result.

Other European airlines are more cautious

EasyJet is aiming for only approximately 40% of capacity in calendar 3Q2020.

The group expects to operate half of 2019 ASK levels by the end of the year (slightly higher, 55%, on intra-Europe). However, it plans to fly 95% of its intra-Europe routes and 70% of its long haul destinations at that time.

The capacity/demand disconnect is likely to remain

Even the announced plans are subject to change and uncertainty, as Finnair has recently demonstrated.

Moreover, there is a further problem for airline capacity planning.

According to preliminary data from ACI Europe, passenger numbers at Europe's airports were down by 78% year-on-year in Jul-2020, and seat numbers derived from schedules were down by 68%.

This disconnect between capacity and passenger demand is likely to remain.