Europe only manages a piecemeal approach to airline state aid

Across the world, governments are struggling to provide financial underpinnings for their key industries. Meanwhile, and in spite of the pre-crisis existence of a single European market, European governments are each adopting their own approach to supporting airlines.

France has agreed aid for Air France (but not yet for other French airlines) and the Netherlands aims to help KLM. Lufthansa Group is seeking support from its home countries, while Virgin Atlantic has asked the UK for aid and is also seeking new investors.

France has agreed aid to Air France-KLM for Air France

The French state is to guarantee up to 90% of a EUR4 billion loan from a syndicate of six banks to Air France-KLM and Air France. The loan will be for 12 months, with two consecutive one year extension options exercisable by the group.

In addition, the French state will provide a direct loan of EUR3 billion to Air France-KLM, with a four year maturity and two consecutive one year extension options.

These arrangements require European Commission approval, but the group is confident that they will allow Air France to meet its obligations and adapt "in a sector that the global crisis will severely disrupt".

France owns 14.3% of Air France-KLM, but France's Minister for Finance and the Economy Bruno Le Maire has dismissed the possibility of nationalising Air France, saying that a state takeover is "not on the agenda at the moment" (TF1, 25-Apr-2020). The French state may participate in any new equity issue.

The country's Minister for Ecological Transition Elisabeth Borne has reiterated that there is "no state support without ecological commitments" by Air France, such as reducing CO2 emissions on domestic operations by 50% by 2024. Mr Le Maire has also said that Air France must continue to be a "good customer" for Airbus.

The Air France-KLM group is working on a transformation plan, to be finalised in the coming months.

It will include economic, financial and environmental commitments, including a review of Air France's activities and steps to improve its financial performance.

The implication is that Air France will become smaller and more focused and may use the crisis to achieve further cost restructuring.

The group will also consider raising fresh equity capital, when it has better visibility on post-crisis demand levels. At the latest, it says this will be considered when 2020 financial statements are approved (likely in Mar-2021).

The Netherlands intends to support KLM

The government of the Netherlands, which owns a 14.0% stake in Air France-KLM, has indicated its intention to support KLM. Discussions over the details and related conditions are continuing, with financial assistance totalling between EUR2 billion and EUR4 billion reportedly under consideration.

Meanwhile, KLM is thought to have considered the possibility that the crisis and separate financial support from both the French and Dutch governments for the group's two main airlines could lead to the deterioration of the Air France-KLM merger.

France's Independent Airline Union (SCARA) has called on the government to set aside EUR1 billion in state aid for French airlines other than Air France.

SCARA questioned why Air France is the only French company entitled to government support, arguing that the funding does not only allow Air France to confront the coronavirus pandemic, but also enables it to honour aircraft order commitments and to restructure its short and medium haul networks in response to international competition.

SCARA noted that the combined revenue result of all other French airlines is 15% that of Air France, adding that these carriers "are facing the same difficulties as Air France" and are "just as worried about renewing their fleets to improve competitiveness".

Lufthansa Group is seeking state support from its home countries

Lufthansa Group is in talks with the governments of its home countries (Germany, Switzerland, Austria, and Belgium) about "various financing instruments to sustainably secure the Group's solvency in the near future".

Announcing preliminary 1Q2020 results on 23-Apr-2020, Lufthansa Group said that its revenue fell by 18% year-on-year in the quarter and its adjusted EBIT was negative by EUR1.2 billion.

A fall in the value of fuel hedges will further erode its net result to be announced with the full quarterly results in the second half of May-2020 (pushed back from 30-Apr-2020).

For Mar-2020, the first month in which the crisis really started to have an impact, Lufthansa Group revenue fell by 47%. Since then most of its fleet has been grounded, and a much higher operating loss is expected in 2Q2020.

It expects its available liquidity of EUR4.4 billion to decline significantly in the coming weeks, due to the very poor demand outlook and existing liabilities for trade payables, refunds on cancelled tickets, and debt servicing.

It therefore considers state support to be essential, with a total figure of up to EUR9 billion sought.

According to a number of media reports, the Lufthansa airline is considering applying for creditor shielding procedures while negotiations with the German government continue. The group is anxious to avoid ceding too much influence through equity or voting rights to governments.

Virgin Atlantic's 51% shareholder, Sir Richard Branson, has previously promised to commit USD250 million of his own money to support Virgin Group businesses. He has also pledged to mortgage Necker Island, privately owned by him in the Caribbean, to raise money to save jobs in the Group.

However, Virgin Atlantic's needs may go deeper than Sir Richard's pockets, and the entrepreneur has asked for a GBP500 million government bailout for the airline in the form of a loan and/or loan guarantees.

The UK government already has some support schemes in place for businesses in all sectors (easyJet has received a GBP600 million loan under the Covid Corporate Finance Facility), but has so far resisted bespoke airline sector packages.

Before considering support to Virgin Atlantic, the government is keen that the airline should first exhaust commercial sources of funding and prove that it merits funding.

…and is also seeking new investors

The airline is now seeking new investors, whether through debt or equity, and Sir Richard is prepared for the possibility that his stake will be diluted as a result. Virgin Group is also reportedly considering waiving the fees paid by the airline for the brand and looking at other assets owned by the group that could be liquidated to raise funds for Virgin Atlantic and other group interests.

Delta Air Lines, which owns the 49% of Virgin Atlantic not owned by Mr Branson, has said that it cannot invest more cash into its partner airline, since it is already at the foreign ownership limit. Moreover – it also has its own liquidity to preserve.

Italy's largest indigenous airline, Alitalia, has been in extraordinary administration since May-2017. In various previous legal structures, the airline has not reported a profit this century, and has frequently switched between state and private sector ownership.

Before the coronavirus crisis, Alitalia had spent nearly three years in administration trying to find a new owner, including an airline partner, with the Italian government and the administrators frequently pushing back deadlines for the submission of bids.

The current crisis has ended any remaining shred of likelihood of finding a buyer and so, the Italian state plans to renationalise Alitalia presented an opportunity. The state will reportedly take a 100% stake, at least initially, and set aside EUR700 million to support the airline.

Condor to receive loan guarantees from Germany and Hessian State

Following the withdrawal of Polish Aviation Group (owner of LOT Polish) from its planned acquisition of the German leisure airline Condor Flugdienst, the German Government and Hessian State Government have committed to providing loan guarantees to it.

Condor, previously part of the now bankrupt Thomas Cook Group, will receive EUR294 million in coronavirus protection aid, as well as EUR256 million for refinancing of the carrier's existing bridging loan. The European Commission has already granted state aid approval for the loan.

Norwegian has already received the first tranche, of NOK0.3 billion. Two more tranches, of NOK 1.2 billion and NOK1.5 billion, are conditional on an increase in Norwegian's equity ratio.

A collapse in the airline's share price underlines the difficulty in raising fresh equity and so, Norwegian is negotiating with lessors and bond holders to swap part of its liabilities to them for equity.

…which will almost wipe out existing equity

If successful, this process will leave existing shareholders with just 5.2% of the equity. Lessors will own 53.1%, with 41.7% in the hands of bond holders and other creditors.

Norwegian's associated restructuring plan entails a complete grounding of its long haul fleet and European short haul fleet until the end of Mar-2021, with only minimal domestic Norway operations continuing.

A gradual ramp-up of flying is then envisaged, with a return to normal operations (at a smaller level than previously planned) by the start of 2022. Whereas Norwegian's pre-crisis fleet comprised 168 aircraft (including 35 inactive), its post-crisis fleet will be between 100 and 120 aircraft.

The ramp-up could start earlier if the recovery is quicker. 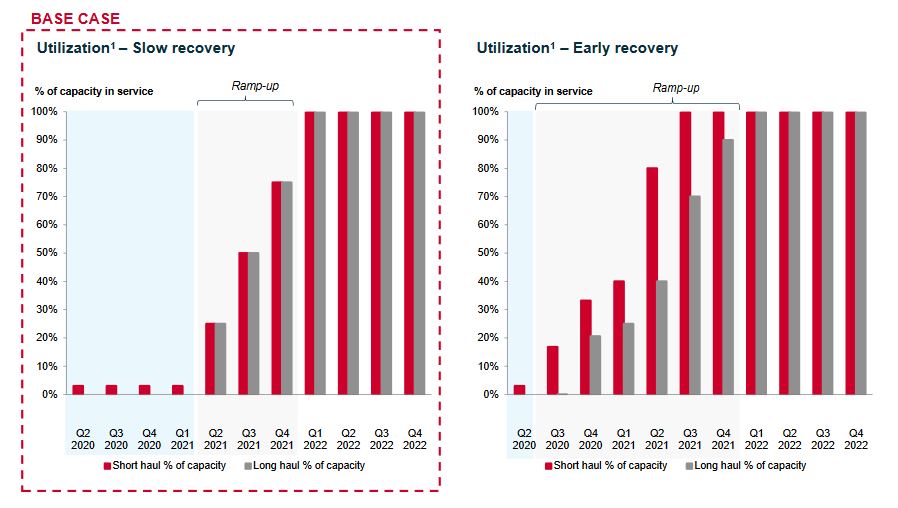 Finland is considering a guarantee for a EUR600 million statutory pension premium loan to Finnair. The Finnish state will also consider participating in a EUR500 million rights issue of new equity planned by the airline, in which it owns a 55.8% stake.

The government of Iceland has agreed to provide Icelandair with financial assistance to operate services from Reykjavik to Boston and either London or Stockholm. The airline is being paid up to IAK100 million (approximately EUR600,000) over three weeks for the services. Separately, Icelandair Group is preparing to issue new shares.

AirBaltic is majority owned by the state of Latvia, which has decided to increase the airline's capital by EUR36.1 million by converting a treasury loan into equity. The government has also indicated its readiness to invest fresh funds into the airline.

Romania's government has reportedly approved rescue aid for TAROM and Blue Air. The government has discussed the provision of EUR65 million in aid to each airline with the European Commission, to mitigate the impact of the coronavirus outbreak.

Croatia's government will reportedly support Croatia Airlines, whose search for a strategic investor is currently suspended.

The world has changed dramatically in just a few short weeks and most states are still struggling to deal with the health onslaught of the coronavirus. It is understandable that in crisis, governments' reflexes are to look inwards and protect their own populations.

But as this temporary new normal begins to settle in, it is time for more rational and regional responses to how a vital industry such as the airlines should be supported in the short term. In this context, Ryanair's CEO Michael O'Leary has suggested just that.