EU steps up investigation into state aid to airports

The European Union plans to launch “in-depth investigations” into state aid granted to German and French airports and used to subsidise services from low-cost carriers. State aid is generally forbidden under EU law, but it is permitted for smaller airports, handling up to five million passengers p/a, in order to boost the economy of less developed regions. The European Commission has said it has "doubts whether the subsidies are necessary" and "whether the aid was proportionate".

Marseille Airport and Frankfurt Hahn are believed to be the cases giving most concern to the EC. It will also look at Ireland’s 2009-2011 travel tax, which it believes may have unduly favoured Irish airlines because it imposed a lower duty on short-haul services.

Marseille airport is France's fourth largest for passenger traffic. Recently, Air France announced details of a commercial "offensive" in Marseille by launching 13 new services there from 02-Oct-2011, increasing seat capacity by 50%. This will represent 1.3 million additional passengers p/a to and from the airport, according to the carrier.

The strategy is to move away from its Paris-centric strategy and into regional French market in a bid to counter the growing threat of low-cost carriers in its home market, which remains one of Europe’s few remaining spaces for significant growth in the sector. In all 54 new point-to-point routes (all within Europe) will commence from Marseille, Toulouse, Nice and Bordeaux, increasing capacity by more than 30%. A secondary strategy is to challenge directly the ever-expanding TGV high-speed rail, which, like its AGV cousin on Spain has stripped airlines of both business and leisure passengers on key routes like Paris – Marseille and Madrid – Barcelona.

The power of two

But what Marseille is better known for is its low-cost terminal, MP2, which stands for Marseille Provence squared (to the power of 2; the total package), Provence being a part of the administrative region in which Marseille is situated.

Marseille is an important port city on France’s southern coast and close to North Africa. It vies with Lyon for the title of “France’s second city”. The city has a population of 850,000 and 1.6 million in the metropolitan area. The airport’s catchment area overlaps to the east with that of Nice Airport and to the west with those of new LCC dominated airports at Montpellier, Carcassonne and Perpignan. It handles a little over 7 million passengers p/a.

As at many other French airports the local Chambre de Commerce, under concession from the national government, operates Marseille but it is one of the major regional airports proposed eventually to be privatised. Such privatisation is not imminent though, partly because Marseille is not included in the list of the first four nominated airports (Lyon, Toulouse, Montpellier and Bordeaux) and partly because that process itself has been frozen as a result of conflict between federal and local authorities. The French government has a 60% stake in the aforementioned airports and plans to sell 50% to the private sector. Local authorities are reportedly seeking to own stakes in the airports, which the federal government opposes.

This municipal level sector and its supporting Chambres still wields considerable power in France despite the succession of partial privatisation trials that have taken place in recent years and it was the local Chambre in Marseille that commissioned MP2 in 2005; eventually opening in Sep-2006. At the time, MRS was heavily oriented towards network/full service carriers with only two LCCs (easyJet and HapagFly) operating before the low-cost terminal opened.

Even now, and before the expansion of Air France services, the network carriers still predominate. easyJet has a couple of routes, one of them seasonal, while Gemanwings has only one seasonal route. The main difference is Ryanair, which was attracted by a terminal whose architects were briefed to stick to low-cost materials and design elements wherever possible to save money, without turning it into a “hardship terminal!”. Marseille is not a base for Ryanair (it has none in France) but it does offer 26 routes from other cities, with currently 36,000 seats a week available.

But that is only a little more than half the weekly capacity of Air France now, before its reincarnation; Air France being the airline that the unions expected to suffer grievously, both from the influence of the TGV and of MP2. 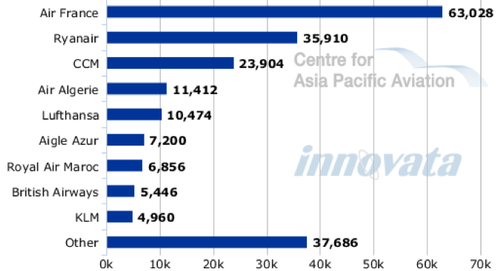 From the start the terminal offered an 88% discount on passenger service charges (EUR1.3 per passenger, from EUR6). This sort of dual pricing was previously unknown in France but it had been approved by the French authorities because cross-subsidisation had not been sought. Additionally, a 90% discount was offered for new routes in the first year and 50% in the second on landing and parking fees and free parking for overnight stopping aircraft. As part of the route incentive the airport also offered airlines “communication expertise and targeted marketing tools to maximise media impact and to promote the Marseille Provence area.” It offered to help handling agents cut fees by 25%.

Potential users would be required to submit a three-year business plan. If they were subsequently seen to have under-estimated their traffic they would then be subject to penalties.

MRS was the not the first airport to propose a low cost terminal with reduced charges. An earlier example was Geneva but that scheme, which might have involved subsidisation from network carriers, disappeared following a legal challenge from Air France, which argued that at the very least it wanted the opportunity to operate from the terminal at the lower costs (as it suggested, too, at MRS though it never did).

Since MP2 low-cost terminals have opened at Lyon and Bordeaux airports. At the latter there is a considerable price differential and facilities are extremely basic.

From the evidence above one can understand why any state aid given to MRS might now be questioned by the EC. The Commission said it doubted that EUR7.58 million of subsidies given to the Marseille airport for building its low-cost terminal were necessary. It also said lower fees charged to airlines using the facility might give them an unfair advantage.

The airport’s role prior to the budget terminal was of France’s gateway to and from North Africa (it offered more weekly flights than the Paris airports) and that still remains the case today, with Ryanair now adding to the mix with five routes including the obscure Nador in Morocco. That is the only real success that state aid could claim in this instance.

The situation at Frankfurt Hahn is different in that there is only one terminal, hence no comparison can be made between facilities. This airport, some 115km to the west of Frankfurt and a similar distance from Luxembourg, is back in public sector ownership (the Länder of Rhineland Palatinate and Hesse) since Fraport sold its 65% stake for a nominal EUR1 in Feb-2009 subsequent to a disagreement with Ryanair over the imposition of a EUR3 passenger fee.

The airport, converted from a military base, opened in 1993 and Fraport’s involvement, in the form of management expertise and structural support (including fixtures and fittings as well as financial investment), had run to more than a decade.

Ryanair remains the principal carrier by a long way with over 50 regular or seasonal routes. Presently, Wizz Air manages just three routes, IcelandExpress, Tailwind Airlines and Excel Airways just one each. If ever an airport can be said to be dominated by one airline this is it. 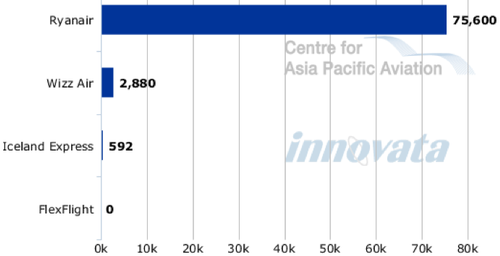 The interest of the two Länder (Federal states) has mainly been in creating and retaining jobs in the area as many had been lost when the military base closed down so any favourable circumstances above and beyond the now withdrawn commitment of Fraport would have been welcome, especially as the airport failed until quite recently (2006) to achieve a positive EBITDA. Apart from the commitment from Ryanair Hahn has also been able to establish itself as a primary cargo airport, at least partly because of capacity restrictions at Frankfurt International, with 16 cargo airlines currently using it. Cargo volume increased by 69% in 1H2011 to a new record.

Even so it took 10 years to turn Hahn Airport into a profitable stand-alone business and the profit has mainly come from cargo operations and non-aero asset utilisation rather than passenger operations.

The regulator will now investigate the refinancing of loans and a credit line provided to Hahn Airport.

The issue of state aid reared its head in this case in Mar-2011 when EU Competition Commissioner Joaquin Almunia stated Ryanair and other LCCs faced European Union rulings over allegations they benefitted from government aid to use regional airports that may have benefitted them and citing Frankfurt Hahn first in a list that also included Luebeck in North Germany, Aarhus in Denmark, Tampere-Pirkkala (Finland), Alghero (Sardinia, Italy) and Pau in southern France. At the same time he aid it was also probing German loans involved in construction airports at airports in Munich, Berlin and Dortmund in Germany; also Italian aid to SEA SpA, which has just announced its IPO. Mr Almunia added that he would examine complaints from LCCs against former state-owned carriers. Ryanair has sued regulators for not investigating its complaints over aid to Air France-KLM, Lufthansa, Olympic Air and Alitalia’s Volare subsidiary.

The Commission opened an investigation in Jun-2011 into financing for infrastructure at Leipzig-Halle airport in Germany, just a month after launching a probe into Hungarian low-cost airline Wizz Air's deals with Romania's Timisoara airport.

Commenting on the latest twist, this month, Mr Almunia said, "The Commission ... has a duty to avoid distortions of competition within the EU's single market and some of the regional airports in Europe are no longer so new or small."

Indeed the scope of the "actual" and "implied" investigations has now reached such epic proportions that it threatens to rival Britain’s telephone-hacking scandal that has sucked in the media, the government and the police.