easyJet blew a kind wind through the cloudy European sky as it reported a better than expected net loss of GBP90 million for the six months ended 31-Mar-2012, despite increased fuel costs and the increased UK Air Passenger Duty (APD). Net loss for 1H2012 reduced 21.5% on the year-ago period on a 5.4% rise in passengers carried and a 15.7% growth in total revenues.

The good performance of Europe’s second largest LCC in terms of passengers carried contrasts with the worsening operating results of its full service peers like Lufthansa Group and Air France-KLM Group, which were not able to absorb spiralling fuel expenses, notwithstanding increased passenger traffic and higher passenger unit revenue in their most recent 1Q2012.

The financial year of easyJet differs from Lufthansa and Air France-KLM’s which both have the calendar year as their financial year.

The improvement of easyJet’s 1H2012 bottom-line result reflects the disciplined implementation of a well-defined network strategy targeting capacity towards highest contribution markets and a strict cost control policy. Expenditure for its seasonally weak first half was helped by a very mild winter and very little external industrial action. The number of cancellations and overnight delays were down almost 90% year-on-year, resulting in a saving of GBP15 million. “It is important to appreciate that this was an exceptionally good result, and in the event of “normal” winter weather in the future, levels of disruption would be higher,” easyJet CEO Carolyn McCall pointed out. 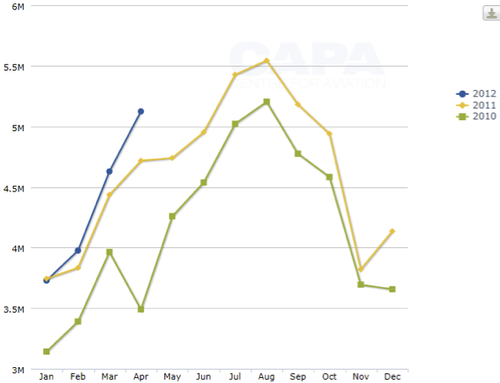 The market is clearly looking favourably on easyJet as well. The carrier’s stock has improved from GBP3.57 to GBP5.15 over the past 12 months. 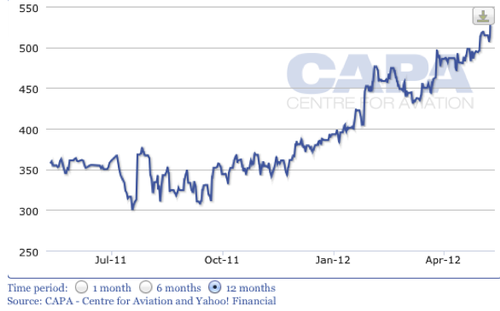 The fee changes made last year delivered a benefit of around GBP2.40 per seat in 1H2012. First bag revenue rose by GBP0.63 pence to GBP4.57 per seat, whilst fees and administration charges rose by GBP1.77 to GBP7.02 per seat.

The carrier is obsessive in driving cost down and has stated that its so-called “lean goal is to protect easyJet’s structural cost advantage by ensuring below inflation non-fuel cost per seat increases.” The different “lean” projects are expected to deliver GBP92 million of savings this financial year and “are progressing well,” according to the carrier. EasyJet is in the midst of renegotiating over a third of ground handling contracts measured by spend, with a target of savings of between 5% and 15%.

EasyJet increased capacity in seats flown with only 3.5% in 1H2012, which included a flat capacity year-on-year in the weak Jan-2012 to Mar-2012 quarter, whereas competitor capacity (measured in seats flown) in European short-haul was flat and fell by 3% in easyJet’s market as several airlines and some, such as Spanair and Malev, ceased operations.

Ms McCall said during an analyst presentation to discuss the 1H2012 results that easyJet has implemented a new and “more rigorous approach” to assessing network returns and each route is measured on the return it delivers against the company post-tax ROCE target of 12%. “EasyJet has put in place a target to thin or drop 5% to 10% of capacity every year. In a dynamic market place, profitability of routes can change over time and by ensuring that route returns are continually monitored the company is most effectively able to drive ROCE,” she said. She added that routes with a ROCE below 12% “must perform a role in the portfolio”, for instance, to engage in “competitive battles” and retain strategic slots or achieve volume deals at high performing airports.

As part of its network return focus, easyJet in 1H2012 culled 15 routes such as Berlin-Gothenberg, Madrid-Bucharest, Madrid-Casablanca and has transferred capacity to higher performing routes such as London-Milan, London-Barcelona, Paris-Milan as well as adding incremental aircraft to its bases in London, Basel and Milan Malpensa. The carrier also opened new bases in Toulouse and Nice to strengthen its position in France, where it is the second largest carrier after Air France. LCC penetration in the hexagon is still very low, at around 14% according to CAPA and Innovata, and offers real opportunities for easyJet to grow on routes where it has no high-speed rail competition. 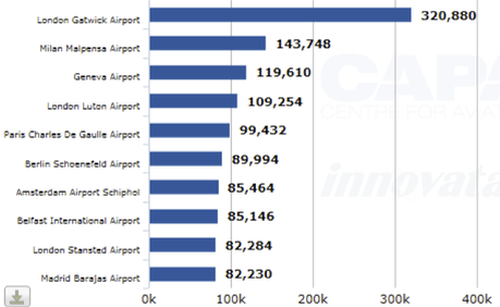 easyJet’s timely focus on the business traveller, with dedicated sales force, GDS use and TMC partnerships

Leisure traffic is the foundation of easyJet – and it is still the foundation of its profitability – in spite of its recent diversification of its strategic focus to the higher yield business traveller. During its 2012 investors’ day on 31-Jan-2012, customer and revenue director Cath Lynn said leisure represented about 80% of its passenger traffic in FY2011; i.e. approximately 45 million passengers.

EasyJet is targeting a “fair share” of the business travel market and has set a KPI of 20% to 24% business passenger penetration of seats sold by 2015. This will, however, take time because it requires a behavioural change within mid to large corporations. Unlike Ryanair, easyJet flies to Europe’s main airports such as Paris CDG, Geneva, Amsterdam and Milan Malpensa, which are assets to draw the corporate traveller to the LCC’s genuine pan-European network. 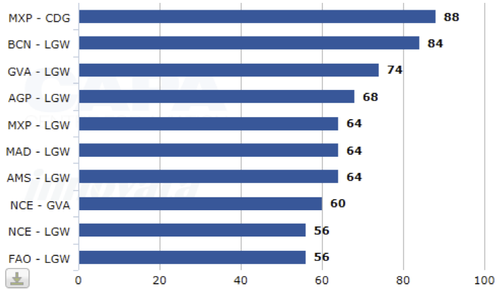 EasyJet believes the business traveller will contribute to its margin, but that it must ensure that adding typical business-like product offerings such as lounge access and fast track does not undermine its currently competitive cost base and add complexity to its operations. Corporate accounts are attractive – but corporate travellers are demanding and costly. But the rewards are disproportionate if the strategy succeeds, as implied in the table below.

Like all other airlines in Europe, easyJet was cautious in its outlook. There are fears of a resurgence of the euro-debt crisis, energy prices remain high and governments across Europe are implementing austerity measures, which all put pressure on consumer spending. Despite some positive signs, in terms of business confidence and continuing strength in business travel, there is little to encourage optimism, at least in terms of overall market growth. easyJet’s goal is to increase its market share, however, so a healthy cost base and an attractive business product is a timely combination.

Says Ms McCall, “The economic environment remains uncertain, and the aviation industry faces headwinds such as the recent increase in UK APD. However, easyJet’s strategy of low fares and our focus on making it easy for our customers, aligned with tight cost management and strictly managed allocation of capital, ensures that easyJet is well positioned to deliver good results for shareholders.”

EasyJet now has 7.6% of the European short-haul market and there is no reason it should not be able to grow this. Ms McCall has brought a new balance at the LCC which previously struggled with pilot unrest, endless disputes with its main shareholder and founder Sir Stelios Haji-Ioannou, and serious punctuality problems. Its operational and financial parameters are now sound, with arrival OTP back at 89% for 1H2012, compared with 73% in the year-ago period.

It is not all good news however. History suggests that the Olympics in July will cause major disruption to business travel to/from London in the short term, but easyJet will be looking to take advantage of rerouted business through its other services to offset this in part at least. And, despite its timely strategy, the carrier will not be immune from the wider economic belt tightening, fluctuations in the cost of fuel, meanwhile needing to fill 2H2012’s planned 7% increase in capacity. 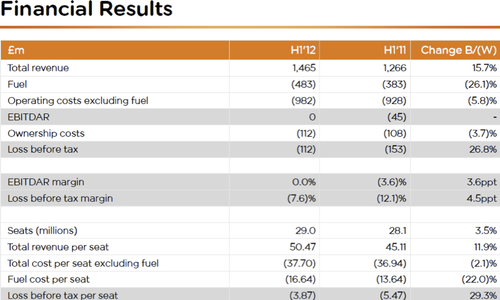 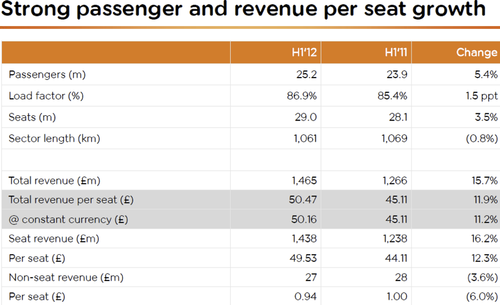 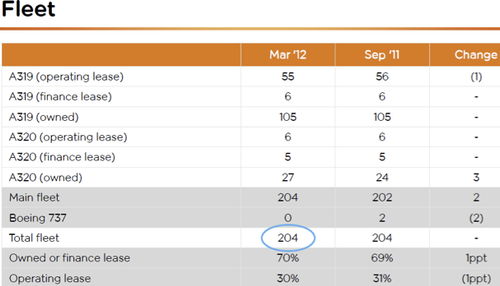