When Carolyn McCall took over the reins as CEO at easyJet in 2010, a lot of wise heads shook and sagely gave her a year to make a mess of things. With no experience in what is a seriously complex operational business, in the throes of change and confronted by brutal competition, as the shades of economic growth were being drawn – not to mention the much unwanted attention of the “rich kid who started an airline” (to use his self-description) – easyJet’s best days were behind it. And a high profile media woman was simply not up to the task.

After yesterday’s annual financial results, as pre-tax profit rose 27.9% to GBP317 million, Ms McCall is going to need at least another year to make a mess of things. The record profit also allows the rich kid to make a tidy return on his investment, as the profit was accompanied by a dividend of GBP21.5 pence a share, and the share price rose 5%.

A cautious fleet growth plan, strong balance sheet, maintaining cost reductions and increasing the revenue margin, while targeting the weaker elements in the market, all seem to be working well for Europe’s second largest LCC.

easyJet is now well placed to prosper where most full service carriers around it – increasingly its main competition – are floundering. In a decidedly less than savoury European marketplace, the carrier seems to be well and truly in the strategic sweet spot. And the rewards are following.

As recently as Jul-2012, easyJet was offering encouraging news of an improved profit before tax of between GBP280 million and GBP300 million for its fiscal year to 30-Sep-2012. That the carrier exceeded the upside forecast by a considerable amount was music to the market's ears.

At Ryanair’s half year results announcement on 05-Nov-2012, CEO Michael O’Leary suggested that “our excluding fuel per passenger cost of EUR26 in the half year is now more than 50% lower than our next closest competitor, easyJet”. (At the same time, Mr O’Leary noted too that “easyJet's average fare is more than 50% higher” than Ryanair’s EUR53). Both carriers go to strenuous lengths in slightly different reporting, in order to ensure that direct comparisons are near-impossible.

But the RASK/CASK equation for easyJet is looking good – and improving. In non-currency adjusted terms, revenue per available seat kilometre was up 8.9% to GBP5.4 pence year on year, while ex-fuel CASK however increased by 3.1%, from GBP3.3 pence to 3.4% – for a net margin increase of a little over GBP0.3 pence.

easyJet’s business airport links add costs, but there was no Eyjafjallajökull this year

The largely successful strategy of catering more effectively to business travellers necessarily involves added costs at the airports involved – “Unit cost increases were driven by increased charges at regulated airports especially in Spain and Italy”, but there was some offset, as the cost were also higher because of “higher load factors”, according to the report.

As the report notes: “Cost pressures were partially offset by shorter average sector lengths, the easyJet Lean programme delivering significant savings in ground handling and non-regulated airport charges, by the increased proportion of larger A320 aircraft in the fleet and by the exceptionally low levels of disruption in comparison to previous years.” Air traffic control delays were down in the past year, partly perhaps due to the reduced capacity expansion, and it was an almost unusual occurrence that there was no unusual external event to damage revenues in 2012.

Given an uncertain outlook, easyJet’s fleet flexibility is vital

The consensus across Europe appears to be that slow economic conditions are here to stay, with a better than average chance that they will decline further before they improve. In those circumstances, and even with a model that now appears to be well launched, a sound degree of risk management going ahead represents good governance for easyJet.

The fleet will increase to 217 aircraft by the end of the next financial year, but beyond that there is the potential to grow it to 252 aircraft or reduce it to 194 by Sep-2016.

This offers considerable comfort if conditions do deteriorate further – although, if there is an unexpectedly fast turnaround, the carrier may be scrambling to add seats. That risk is probably more than acceptable at present. 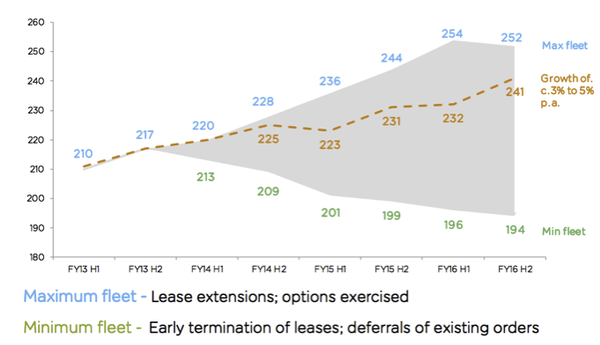 For a carrier with a relatively strong balance sheet, easyJet is now well positioned strategically. As CEO Ms McCall noted in her report, there is a lot of good news among the bad for an airline in its current state.

Meanwhile, forward bookings are holding up – perhaps surprisingly – well. Says Ms McCall, “Forward bookings for the first half of the 2013 financial year are broadly in line with the prior year. With around 45% of winter seats now booked, first half total revenue per seat at constant currency is expected to be up by low to mid-single digits; as is usual at this time of the year it is too early to have any visibility on second half revenue per seat performance.”

Despite the stormy weather, in many ways the waves are parting for easyJet: the points that the CEO stresses as valuable for easyJet are that legacy carriers are incurring significant short-haul losses; weaker carriers are retreating or exiting; consolidation is occurring, reducing competition; and there is increasing capacity discipline in the market, as other airlines reduce their risk exposure. Ryanair cut back on its aggressive expansion last year and, according to CEO Mr O’Leary, the carrier will grow by only 4% annualised this year. easyJet’s median growth rate sees a spread between 3.5%-5% for the next four years.

These circumstances offer a “unique structural opportunity for easyJet”, says Ms McCall. And, over the next six months, as competitors in the carriers main markets reduce capacity by 3.6%, this offers the perfect fit for easyJet to grow by the same amount. The underperforming market of Spain will see the carrier’s biggest retreat, but stronger markets like Switzerland are to expand by a strong 11%. 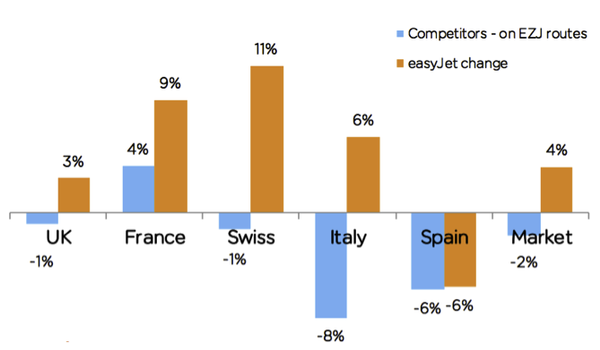 Here the strategy of attacking the weakest links is apparent too. For example, as Air France, desperate to reduce its heavy cost burden, is forced to reduce loss making routes and restructure, opportunities open up for the more nimble LCC.

Over the 12 months to 30-Sep-2012, easyJet increased its French market share by a whopping 8%, as Air France shrank 13%. Similar but slightly smaller results were achieved in Italy and the UK, while in Switzerland a cost-effective Swiss held its own, as easyJet took share from other carriers. 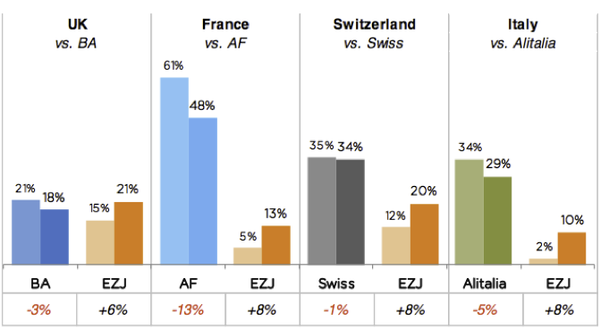 easyJet invasion of Moscow is good news for Manchester

There are some positives looking into 2013 as well, despite the inevitable caution in projecting the operating outlook. easyJet in Sep-2012 acquired the scarce Russian rights to Moscow Domodedovo Airport, freed up when bmi was purchased by British Airways. Starting in 2Q2103, the carrier will operate four times weekly A320 service. Two other new routes from the northern city airport were also announced to be added in 2Q2013, Prague and Thessaloniki.

easyJet won the valuable Moscow rights over Virgin, on the grounds that, "on balance, allocating scarce capacity to BA and easyJet is likely to deliver the greatest benefit to consumers. EasyJet's proposal will introduce an innovative product into the market and has the potential to deliver the greatest dynamic fare benefits for consumers”, according to the UK CAA’s director of regulatory policy, Iain Osborne. easyJet has announced that it will offer introductory return fares of GBP125, around GBP20 less than British Airways’ lowest London-Moscow prices.

While restrictive access policies like Russia’s are not good news for consumers, they do offer much better news for the airlines that manage to gain the rights that are available. easyJet will be competing with British Airways and Aeroflot between the UK and Moscow, although the LCC will monopolise service from Manchester.

And, as the carrier expands across Europe, Moscow offers another point in “easyJet’s ‘join the dots’ strategy, which is to add flights to destinations from multiple bases across Europe providing passengers with convenient point to point services”, according to Ms McCall. “With our strong European network we look forward to connecting Moscow with other European cities.”

easyJet is right in the strategic sweet spot, despite gloom all around

They say it is an ill wind that blows nobody any good. For a carrier to profit in circumstances where others are suffering displays a certain degree of strategic leadership. Ryanair’s leadership is very straightforward and very effective: it is the lowest cost operator in the market and is near-untouchable as long as it follows that course without extravagant expansion.

easyJet meanwhile is getting it all wrong for an LCC: flying to high cost primary airports, working with GDSs, dealing with Travel Management Companies, engaging in a frequent flyer programme – and, finally, allocating seats!

Somehow it seems to be making profits, record profits, but Ms McCall obviously still has a lot to learn.