Three of the major US carriers are expressing dissimilar views of their respective forecasts for 2Q2013 as Delta believes it could again achieve record results for the quarter after posting its first profitable quarter in a decade during 1Q2013. United has a more neutral view of the current operating environment, and is remaining more tight lipped about its prospects for 2Q while Southwest is expressing a cautious outlook as it is stimulating passengers at the expense of suffering weaker yields.

Those carriers offer their differing views as industry trade group Airlines For America (A4A) estimates a slight uptick in passenger growth during the summer high season from Jun-2013 through Aug-2013. Most airlines for the first two months of 2Q2013 recorded declines in unit revenues, which could indicate some challenges in gaining pricing traction. But the upside in fuel prices generally remains lower year-on-year and should help soften the fall in revenues.

Delta boasts it could post another record performance during 2Q2013

Delta during Apr-2013 and May-2013 turned a relatively stable performance in traffic, capacity and unit revenue, gaining some sequential improvement from Apr-2013 to May-2013 as its unit revenues improved from a fall of 2% year-on-year in Apr-2013 to remaining flat in May-2013.

The sequential improvement should continue into Jun-2013 as Delta president Ed Bastian recently estimated the carrier’s unit revenues would be flat to up 1% for the month as overall fuel costs would fall by about 10% during 2Q2013. He remarked that bookings for the peak summer season look solid, and due to continued strong demand both Delta and the industry could post some modest capacity growth during the peak travel season, pledging that Delta could continue to maintain its revenue premiums if capacity increases. The carrier has not supplied 3Q2013 guidance, but has previously stated its 2Q2013 consolidated capacity would be flat to up 1%.

A4A expects some growth by US carriers in domestic markets during 3Q2013 as economic conditions seem to be improving and airlines are focused on delivering improved return on invested capital (ROIC).

US carrier scheduled domestic flights and seats: 2008 to estimated 3Q2013

Source: Airlines For America based on publishes schedules May-2013

Overall, Delta expects a strong showing in 2Q2013, perhaps even record results, said Mr Bastian, despite economic sluggishness in Europe and Japan and USD120 per barrel fuel costs representing the new normal. Presently, Delta believes its operating margin will fall at the high end of the 9% to 11% guidance it previously released for 2Q2013, as its 3% to 4% rise in non-fuel unit costs is slightly lower than previous guidance of a rise of 4.5% to 5.5%.

Part of Delta’s bullishness rests on its corporate share rising 4% year-on-year as the industry as a whole remains flat in that passenger segment, said Mr Bastian. He attributed some of Delta’s expansion in the corporate market to the lapping of an expansion at New York LaGuardia that began in Mar-2012 after the carrier completed a slot swap with US Airways. Delta during the last couple of years has worked to improve its position in the New York market through the expansion at LaGuardia – where Delta serves 48 of the top 50 markets from the airport – and through the recent opening of a new terminal at JFK.

During 1Q2013 United grew its corporate revenues by roughly 4%, but warned that certain economic indicators had weakened since the start of the year. Budget cuts and increased payroll taxes are continuing to drive some uncertainty in demand, as well as discussion over the US federal reserve potentially scaling back its aggressive stimulus efforts.

Recently speaking to the same group of investors as Mr Bastian, United CEO Jeff Smisek described the US economy as “skating sideways”, explaining that the increased taxes and underlying economic uncertainty are affecting consumer confidence. While he remarked he does not see a degradation in US demand, United’s chief is not encouraged by improving US economic performance.

Mr Smisek stated Europe continues to operate in a recessionary environment, and demand has fallen off quite a bit. As a result United has made significant capacity cuts in the region, said its CEO. During 2Q2013 United expects its international capacity to fall by 1.1% to 2.1%, and its consolidated supply to decrease by 1.7% to 2.7%. Given that nearly 26% of United’s international seating capacity is deployed to Western Europe, it is likely a significant portion of the decline in international supply is dedicated to that region. 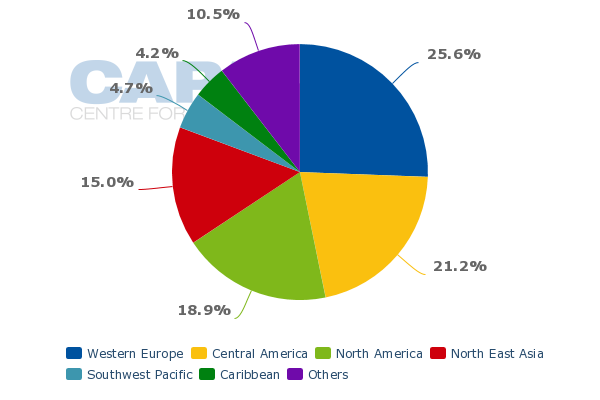 The decline in the yen has created some pressure in United’s Asian network, but “we are a lot less dependent on Japan than one of our larger competitors”, said Mr Smisek, referring to Delta, which accounts for 27% of the seats deployed between the US and Japan (based on current schedules in Innovata – 16-Jun-2013 to 22-Jun-2013). 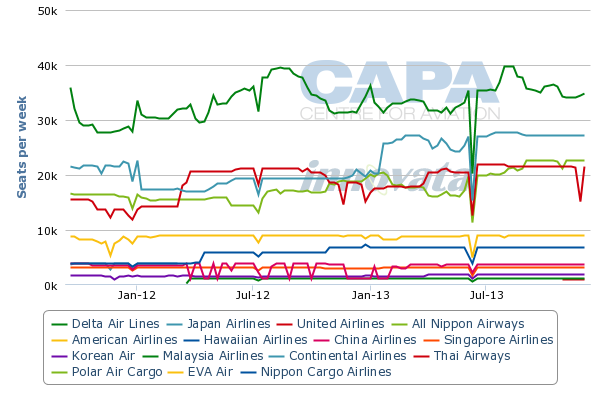 (Mr Bastian stated that Delta has hedged its exposure to yen at JPY80 to the USD for roughly the next three years, which should ease some of the effects of the depreciation of Japan’s currency. However, the devaluation is pressuring point of sale in Japanese markets, which has affected demand. Delta’s president remarked that the carrier has culled some capacity in its Japanese markets – even in the busier summer months – to combat the softness.)

Presently, United represents about 17% of the seats deployed between the US and Japan, which obviously results in lower exposure to the effects of the currency devaluation. Its strong position in the US-China market (a 32% seat share versus Delta’s 13% share) resulted in solid unit revenue growth in its Pacific markets during 1Q2013 of 7%, driven by 13% unit revenue growth specifically on its Chinese routes. 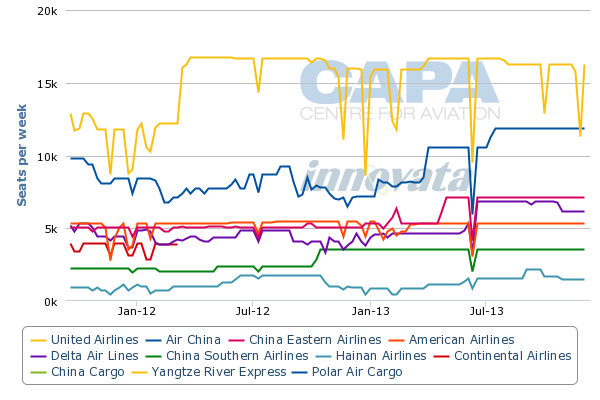 Paralleling Delta’s bullish outlook and United’s more tempered view of demand for 2Q2013 and the peak summer season is Southwest’s conclusion that revenue trends since Mar-2013 have softened. Carrier CFO Tammy Romo recently explained that while Southwest has been able to stimulate traffic, yields remain weak.

Ms Romo estimated Southwest would post unit revenue declines in the single digit range during Jun-2013, noting that bookings for the month look good. But she also issued a warning that the carrier remained cautious regarding summer high season demand due to the sequestration and increased payroll taxes.

Southwest estimates its unit cost excluding fuel should increase 2% in 2Q2013 after recording a 3.4% rise during 1Q2013. The carrier expects its unit cost inflation to abate somewhat during 2H2013 as it nears completing the retrofit of its 400-plus 737-700s with six extra seats for a total seat count of 143. The reconfigurations have been inflating Southwest’s maintenance costs, which top-line expenses grew 7% year-on-year during 1Q2013.

The carrier also expects to start reaping benefits from a codeshare it initiated with AirTran during Apr-2013 and the further integration of the two carriers' networks. Southwest is in the process of de-hubbing AirTran’s Atlanta hub, which is set for completion in Nov-2013. While the deconstruction of the hub will do little to improve Southwest’s revenues in 2013, the carrier has stated the codeshare is producing favourable results.

The conflicting signals being sent by these major airlines at least partially reflect uncertainty in the wider economic environment, although most recently there does appear to be growing confidence.

United and Southwest are expressing caution as A4A believes the uptick in summer travel is attributable to rising household net worth and corporate profits, robust airline operational performance and decreasing fuel prices.

While demand remains steady, pricing traction appears to remain fragile, which is not so much of concern if oil prices remain lower year-on-year. For now it seems carriers have the option to pull capacity levers down if demand begins to weaken further or if geopolitical events trigger a spike in oil prices.

But those airlines also need to keep a close eye on costs, which are rising for most of the US majors. If they cannot get a handle on cost containment, at some point dimming revenue will begin to pressure their bottom lines. There is little room for complacency...even for Delta.