Delta Air Lines became the world's largest carrier by traffic in 2010, according to IATA, with Southwest Airlines remaining the largest domestic carrier and Ryanair still the largest international carrier by passengers. Delta’s consolidation with Northwest Airlines boosted Delta past Southwest and American Airlines based on combined international and domestic passenger numbers.

Delta Air Lines handled 111.2 million scheduled (domestic and international) passengers in 2010, followed by Southwest (106.2 million) and American Airlines (86.1 million). China Southern Airlines was next largest, handling 76.1 million passengers in 2010, followed by Ryanair (71.2 million), as was the case in 2009. Meanwhile, Lufthansa overtook United Airlines for sixth place, and China Eastern Airlines entered the top 10 for the first time, at the expense of Continental Airlines. Air France rounded out the Top 10 list.

Emirates Airlines, meanwhile, moved up to fifth place with 30.8 million passengers, overtaking British Airways with 22.8 million. KLM remained as the fifth largest international airline, with Delta Air Lines featuring in the list in 2010, at the expense of Singapore Airlines, which slipped out of the Top 10. American Airlines and Cathay Pacific rounded out the Top 10.

US and Chinese carriers are the world’s largest domestic airlines

Southwest Airlines was the largest domestic carrier in 2010, with 106.2 million passengers, ahead of Delta Air Lines (90.1 million) and China Southern Airlines (90.1 million). American Airlines, US Airways and United Airlines also remained significnat domestic carriers, with the remaining carriers based in Asia. All of China’s Big Three carrier’s featured in the list, as did All Nippon Airways, now Japan’s largest domestic and international carrier, and Qantas Airways.

Emirates remained the world's largest carrier measured by international traffic (RPKs) for the second consecutive year, ahead of Lufthansa and Delta Air Lines although Air France-KLM would have ranked first if its two operating units were combined. Domestically, only US and Chinese carriers rated in the top 10 list, led by Delta Air Lines. Southwest and JetBlue were the only two LCCs featuring. 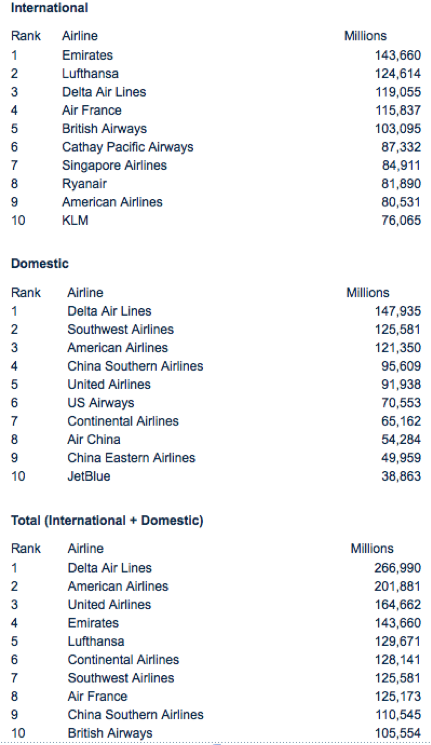 Cathay Pacific Airways was the largest international cargo carrier in 2010, ahead of Korean Air and Emirates with FedEx, UPS Airlines and China Southern Airlines the largest domestic freight carriers. 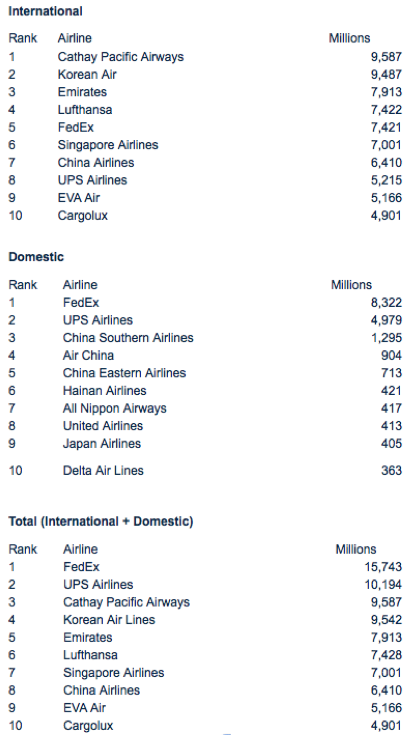