Critical for aerospace companies to rein in excesses

The aerospace market, buoyed by ongoing conflicts in Iraq and Afghanistan, is facing a somewhat restrictive future, according to AlixPartner LLP, in its 2010 Global Aerospace and Defence Review. The post-recession era will become what it terms a "new normal" characterised by "prolonged aneamic demand, shrinking defence budgets and brutal competition that must now encompass new players from Russia and China".

“Companies in the aerospace and defence industry need to move quicker and more decisively to master disciplined programme management, supply-chain optimisation, lean engineering and overhead cost control,” said the company. “Many companies today are spending up to 200 engineering hours per part, compared with about 21 to 28 hours for many companies in the auto industry, an industry also building highly complex products. There is also ongoing operational issues, such as the continued inability of OEMs to effectively manage integration with Tier 1 and Tier 2 suppliers, the failure of OEMs and suppliers alike to master lean engineering, and the inability of all parties to perfect efficient, effective program management.”

The report went on to say that design-to-cost practices are still rare in the aerospace industry and that the number of RC overruns is as high as NRC overruns today. It also found that, while many companies have partially adopted the principles of lean engineering, there is much “slippage” when those principles are actually put into action in programmes, leading to far too many engineering and production changes. In addition, as suppliers assume more responsibilities in new programmes, a paradigm shift is needed in the OEM-supplier business model where, among other things, programme engineering and design-to-cost exercises are conducted collaboratively and early in the design process.  Proactive supplier management is especially critical, it notes, when OEMs expand their supply bases to include suppliers in emerging markets.

Managing Director Phil Toy pointed to problems in global supply chains that have compromised the Boeing 787, Airbus A380 and 400M as well as the Lockheed Martin F-35 programs. “This has caused operational and financial pain for suppliers who, in turn, have pressed for financial compensation for delays outside their control, stipulation increasingly built into supplier contracts of late.”

“OEMs have typically conducted new programme development through a sequential process, where suppliers aren’t brought in until near the end of the conceptual design phase,” said Toy of the firm's aerospace and defence practice. “But given the pressures in today’s environment, these cycle times need to be cut by 40% or more.  That means OEMs need to truly master integrated product development and mutually-beneficial collaboration approaches, while suppliers need to be open to cost and innovation-sharing in exchange for bigger pieces of new programmes and earlier involvement.  In the process, everybody should be working toward the over-arching goal of being competitive in what looks like a dramatically changed world ahead.”

The company reported that original equipment manufacturers and suppliers did surprisingly well in 2009, with the industry growing at 2%. However, it cautioned, that pace will not continue.

Headwinds are numerous including declining aircraft deliveries and orders on a global scale, dropping 70% in 2009. It also said the European debt crisis and still-sluggish US economy continue to hamper demand despite double digit growth reported by passenger and cargo airlines.

This will be compounded by defence spending cuts in the coming years as the Pentagon and defence ministries face cuts in order to repair government balance sheets, it said, adding while business jet hours flown are growing, demand for aircraft continues to be weak.

“The aerospace and defence industry is facing a turbulent ride going forward,” said Toy. “The commercial sector faces a global economy that’s uncertain at best.  Business jets face an even tougher environment, while also still trying to shake the ‘politically incorrect’ stigma of a year ago.  On the military side, the Pentagon is actively looking to trim costs at every turn, given that the interest payments on the national debt alone are on track to equal last year’s defence budget.  And meanwhile, the ongoing debt crisis in Europe is yet another overhang likely to keep a lid on aviation demand, while also making credit more costly for airlines and business jet buyers. Pressures on defence budgets will be intense going forward, which should prompt primes and non-primes alike to move now to optimise their cost structures.  Overall, given the uncertain demand outlook in most sectors, the A&D industry needs to perfect the operational processes and business models it’s taken on in recent years and really make them work.  Right now, that’s not the case, and as a result, the industry has a large number of structural inefficiencies that other industries have already mastered.”

The study also addressed maintenance, repair and overhaul work saying there needs to be more cost cutting. He suggested USD 16 to 22 cents in fixed, structural costs for every dollar of revenue must be shed in order to restore margins the industry once enjoyed. It cited excess capacity in North America as the problem as airlines migrate to low-cost MRO facilities in emerging markets. MRO demand in China, India and the Middle East is predicted to grow 7% to 10% per year over the next decade largely on the growth in aviation demand in those markets. “North American and Western European MRO providers can erase much of their cost disadvantage through aggressive performance improvement efforts,” said the study, predicting accelerating consolidation in those markets with aerostructures, electrical systems, airframe MRO seen as offering the greatest opportunities.

“Both strategic and private-equity owners would be well advised to remember that when it comes to M&A in this industry, the ‘M’ is a lot more important than the ‘A’,” said Managing Director Dave Fitzpatrick. “The industry is entering a period where budget limitations and cost management are the name of the game, including what you might call a ‘new’ New World Order defence budget in the United States, one whose size is a long, long way removed from Cold War-era budgets. Companies in the defence and commercial sectors that adopt new strategies to meet these new challenges will be the winners over the long haul.”

Good day for suppliers on the markets 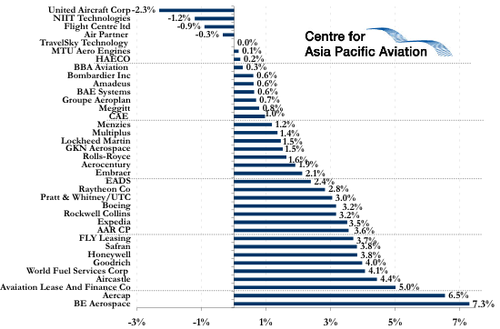