With aviation and travel featuring very high on its government agenda, Singapore Airlines now looks well positioned to emerge from the coronavirus crisis as an industry leader. Other governments across the Asia Pacific region are taking steps to support the airline industry during the COVID-19 crisis, but in most cases the steps taken to date are timid and, so far, inadequate.

Some governments moved early to introduce packages based on waivers of fees and charges, and state-backed loans for airlines have also been offered. A handful are following up these efforts with more direct forms of financial aid for carriers, with more being likely to follow.

Such steps can risk distorting the market, and generally it is not ideal for governments to be picking winners and losers in such a globally connected industry.

But the playbook has been thrown out of the window due to the sheer scale of the industry shock. Governments with the greatest appetite – and capability – to support their airlines could be a major factor in determining which carriers are in the strongest position when the pandemic eases.

Sometimes a blunt instrument is the best weapon available - regardless of the effect on the long term market profile.

The Singapore government has emerged as one of the leaders in supporting airlines.

On 26-Mar-2020 it unveiled significant measures to help aviation and other sectors. These include funding 75% of up to SGD4,600 (USD3,198) of aviation workers’ monthly pay, and providing SGD350 million in fee relief for airlines. This is part of a massive SGD48 billion economic stimulus package announced by the government.

State-backed Temasek Holdings has also taken steps to shore up Singapore Airlines. Temasek – SIA’s majority shareholder – is backing efforts by the airline to raise new equity to help it survive the near-total suspension of its operations.

SIA will offer shareholders SGD5.3 billion in new equity and up to SGD9.7 billion through 10-year mandatory convertible bonds. These will be offered to shareholders on a pro rata basis, and both issues by SIA will be treated as equity on the company’s balance sheet, SIA has said.

The airline has also arranged a SGD4 billion bridge loan facility with the Singaporean DBS Bank, which it said will support “near-term liquidity requirements.”

Temasek backs SIA and positions it well for post-pandemic growth

These measures will be voted on by shareholders at an extraordinary general meeting to be held soon. Temasek said it will vote in favour of the equity and bond issues, and has committed to purchasing its pro rata entitlements, as well as providing a backstop by purchasing any unsubscribed remainder.

Notably, Temasek stated that these transactions will not only tide SIA over a short term financial liquidity challenge, but also “position it for growth beyond the pandemic.”

Temasek stressed its support for SIA’s fleet modernisation strategy, which will mean the delivery of more fuel-efficient aircraft. This will be a rare piece of good news for manufacturers as other airlines contemplate order deferrals. The airline group (including SIA, Silk Air and LCC Scoot) already has one of the industry's lowest average ages, at 6.3 years. 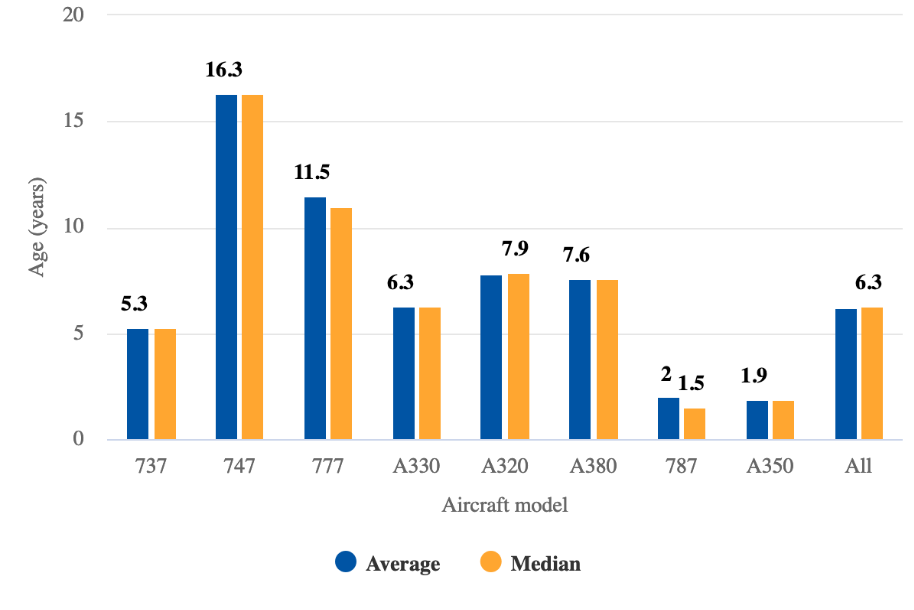 In South Korea, the government has deferred payments of airport landing, parking and facility fees. State-run banks have also agreed to provide KRW300 billion (USD245 million) in unsecured loans to help low cost airlines that have been hard hit by plummeting air traffic.

The most recent step is a proposal for a 30-50% aircraft property tax reduction for major airlines, including Korean Air and Asiana, although it has yet to be finalised by the government.

Korea’s Ministry of Land, Infrastructure, and Transport has met with airlines to explore measures to help the industry. Airlines also held a separate meeting to discuss potential options for government aid, and are likely to push for further assistance.

The Malaysian government is considering its options for aid to airlines affected by the pandemic.

Malaysia Airlines has confirmed that it has been in discussions with the government regarding emergency measures to the aviation sector. The government is reportedly considering setting up a vehicle to take over debt from companies such as airlines, and more radical alternatives such as merging airlines have even been raised again.

Malaysia Airlines has stressed that it has not been involved in discussions with the government regarding mergers. The airline said any solution should address broader issues such as capacity oversupply and long term sustainability of airlines.

While mergers are one option, the airline said addressing such problems through regulatory and policy changes could be equally as effective.

The Hong Kong Airport Authority, backed by the Hong Kong government, has rolled out an HKD1 billion (USD129 million) package of financial relief to the aviation industry.

Approximately two thirds of this consists of a government waiver of air traffic control charges for the 2019/2020 year, and that waiver will be passed on to users. Other forms of airport fee relief for airlines and airport users make up the remaining third of the package.

This is the third round of relief since Sep-2019, as the airline industry has also been suffering financially from the protest movement that swept Hong Kong in 2019.

Although Cathay Pacific has welcomed the latest round of relief measures, the airline has stressed that it is not enough, “given the significant deterioration” in its position due to COVID-19 and global travel restrictions.

“We are of the view that significantly more much-needed immediate assistance, which is commensurate with the scale of this crisis, still needs to be provided”, Cathay said.

In Australia, the federal government on 17-Mar-2020 unveiled an aviation support package that includes waivers and refunds for fuel excise tax, domestic air traffic control fees, and domestic aviation security charges - costs that diminish greatly in value where airline flying is greatly reduced. The package is valued at AUD715 million (USD427 million), including an upfront payment of AUD159 million covering the reimbursement of charges paid since 1-Feb-2020.

Some airlines urged the Australian government to go further.

The country’s largest independent regional airline, Regional Express Holdings (Rex), said it would only receive benefits worth about AUD1 million per month from the relief package. This would be “grossly insufficient” to cover the AUD10 million per month the airline expects to lose operating its “heavily reduced” schedule, said John Sharp, Rex deputy chairman.

On 28-Mar-2020 the Australian government heeded calls from regional aviation by announcing funds specifically for this sector. This includes AUD198 million to ensure a core regional network remains in place for essential services and freight. Another AUD100 million will be provided directly to regional airlines to meet standing costs to ensure minimum operational viability.

The announcement occurred in the nick of time for Rex and others. On 22-Mar-2020, Rex said it would have to suspend its scheduled flights from 6-Apr-2020 – except in Queensland – unless federal and state funding was forthcoming.

Other regional carriers in Australia warned their existence was under severe threat. Eight such airlines sent a letter to the government on 26-Mar-2020 saying their financial survival “can be counted in days rather than weeks” if more direct aid was not provided immediately.

After the federal aid package was unveiled, Rex said this support will ensure that “all previously sustainable regional operators will be able to spring back into business if the crisis dies down within the next 6-9 months.” The carrier said it had been preparing a total shutdown and a stand-down for 90% of its staff, but now it can retain 30-40% of its staff and operate a reduced schedule to most of its 59 destinations.

Qantas is in a stronger position than most of its rivals

Not surprisingly, perspectives on government aid differ, depending on the financial strength of the airline.

Qantas has particularly healthy liquidity, which it improved by raising AUD1.05 billion using seven of its 11 Boeing 787-9s as security. This deal lifts the Qantas group’s available cash balance to AUD2.95 billion, with another AUD1 billion in undrawn loan facility.

This war chest will ensure that Qantas can survive for an extended period, even with most of its network shut down. With this buffer, CEO Alan Joyce has suggested that providing relief for workers who have been put on unpaid leave or laid off should be a higher priority for the government than further airline aid - pointedly where it involves aid to Virgin Australia.

Virgin Australia confirmed on 31-Mar-2020 that is considering formally requesting AUD1.4 billion in support from the government which it says would be part of a “broader industry support package.”

New Zealand’s government has provided a loan facility to Air New Zealand worth NZD900 million (USD527 million) to keep the airline afloat if its cash reserves drop below certain thresholds.

The value of the loan is based on what the airline estimates it will need to operate through the demand slump.

“We asked for $900 million, and that’s what we got”, said CEO Greg Foran. The loan facility will be available for 24 months. The government has options to seek repayment through a capital raising by the airline or converting the debt to equity.

As can be expected, industry groups have been pressing Asia-Pacific governments to take further steps in support of beleaguered airlines.

IATA, for example, has written to 18 governments in the region to stress that options such as direct financial support, loans and loan guarantees, and tax relief are needed.

IATA noted that a growing number of Asia-Pacific governments – including those in Australia, New Zealand and Singapore – have introduced financial relief packages. “But we need more governments to come on board” to support airlines, said Conrad Clifford, IATA’s regional vice president for Asia Pacific.

The Association of Asia Pacific Airlines (AAPA) has also been vociferous in calling for such government measures to be deployed quickly. The AAPA said airlines are taking “tough but necessary steps” to cut costs and are seeking market financing, but these steps alone “will not be sufficient to guarantee the survival of the aviation sector.”

Staving off collapse must be the immediate goal

It is hard to argue with the sentiment expressed by the AAPA. Aviation is a vital element in the region's expanding socio-economic emergence from third world status, and the consequent surge in tourism is closely correlated with airline growth over the past decade.

The pandemic has hit the industry so hard and so quickly that even the best-managed and financially strongest airlines are suddenly looking fragile. If ever there was a time when airlines need a helping hand from their governments, this is it.

The reaction of some governments shows that they recognise the vital role airlines will play in the economic recovery that will (hopefully) follow when COVID-19 has run its course.

Other states will need to move faster and further than they have so far. There will certainly be a time when governments will have to examine whether markets are being distorted too much by state aid, but right now, ensuring that airlines are still around by then is the first priority.