China and other East Asian nations were in the frontline in the fight against coronavirus. It is reasonable to assume they should equally be the first to emerge. As we search for a tipping point in the global battle against COVID-19, these Asian markets may offer cause for optimism - or at least the signs of what the road back might look like.

The most recent schedule filings certainly support that emergence proposition, for domestic airline market regrowth. International expansion will be some time away as many countries remain effectively locked against international visitation.

In some cases it is two steps forward, one step back, as concerns remain about lingering pockets of contamination. But a consistent pattern is emerging of domestic markets that have turned the corner.

The domestic airline markets of China, Korea, Taiwan, Japan, and Indonesia are all clearly demonstrating a belief by their airlines that a corner has been turned, as they re-introduce capacity into the market. While welcome signs, they may not yet all be timely.

The source of the coronavirus, China, after initial procrastination, imposed draconian and ultimately effective measures to confine the outbreak largely to Wuhan and its surrounding Hubei province.

More recently, China has like other countries suffered some reinfection damage from repatriated residents who returned contaminated with the virus, but generally is showing real signs of a return to something like normality as industry swings back into action.

With encouragement from Beijing - keen to restore normality prior to the early-May week long holiday, after the Feb-2020 Lunar New Year holiday was lost as the virus spread - airlines have quickly added capacity back into the market.

Hopefully this enthusiasm to return to normality does not provoke premature activity, and Chinese airlines' forward plans have fluctuated week to week, as small local outbreaks occur. But the recovery trend is clearly apparent from the continuing rise in capacity. 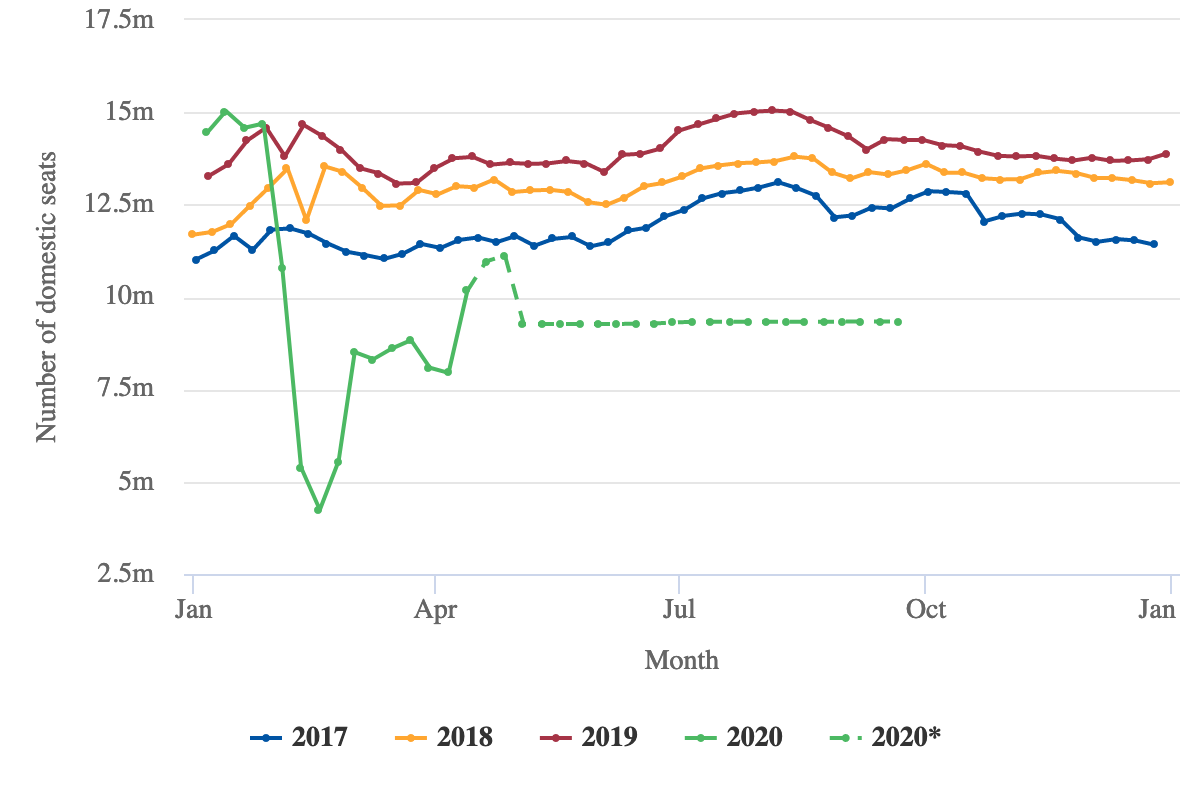 After being burned by SARS as well as MERS, Korea was, like Taiwan, well prepared for an outbreak of this nature and competently managed its way through the early stages.

Despite some signs of the need for caution, the recovery trend is vividly shown in the capacity graph, as seat numbers climb back towards 2019 levels. The schedules data in this graph frequently understate the capacity in the market, so it is quite possible that the recovery could be even more marked than suggested here.

Despite the nation's powerful High Speed Rail network, which replaced much of the airlines' domestic market, the tourist island of Jeju makes the air route to Seoul one of the busiest in the world, implying a large boost to tourism in the country. 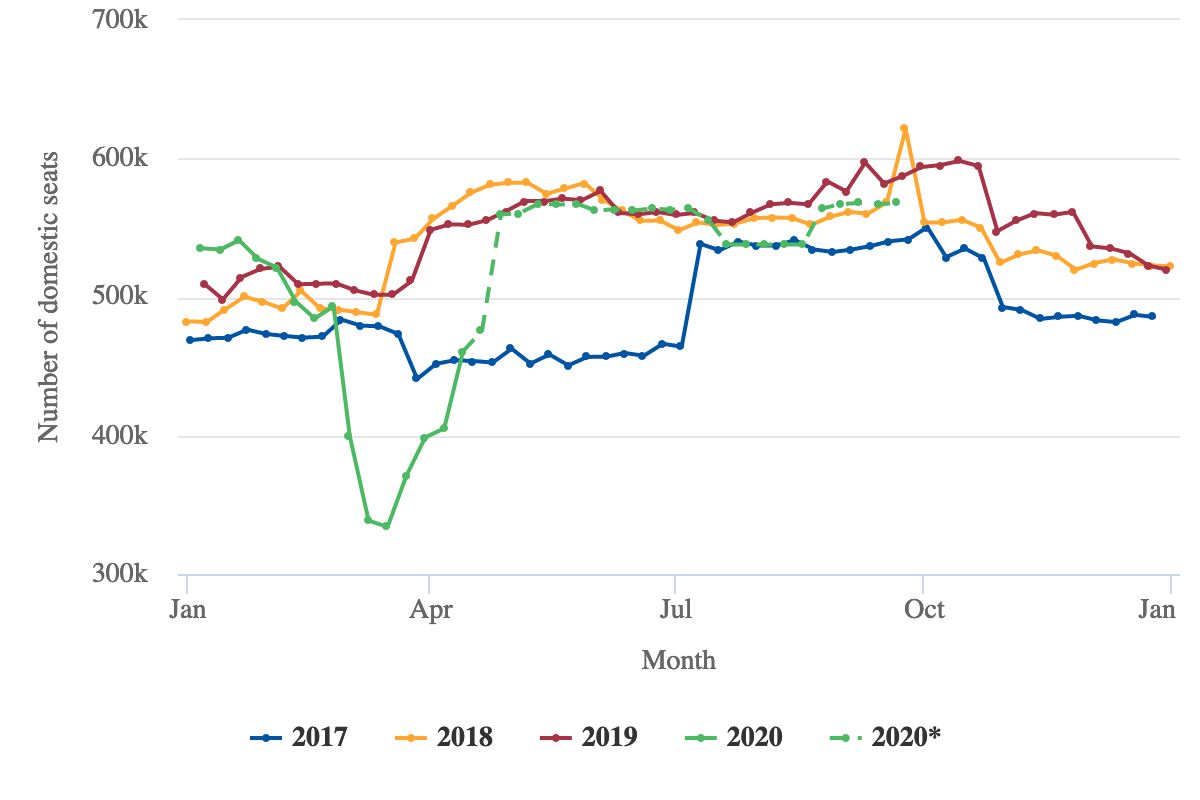 Taiwan demonstrated perhaps the most intelligent and sophisticated response to the arrival of coronavirus of any administration globally.

With a combination of careful preparations, a sound effective warning system and an integrated database allowing the government to track cases meticulously, it has minimised the impact and spread of disease.

Taiwan's domestic airline market however is small; like Korea's it was eviscerated by a network of High Speed Rail operations, but without the saving grace of a major island destination like Jeju. But after hitting its lows in early Mar-2020, levels have been bouncing along a bottom, with a general trend of recovery. 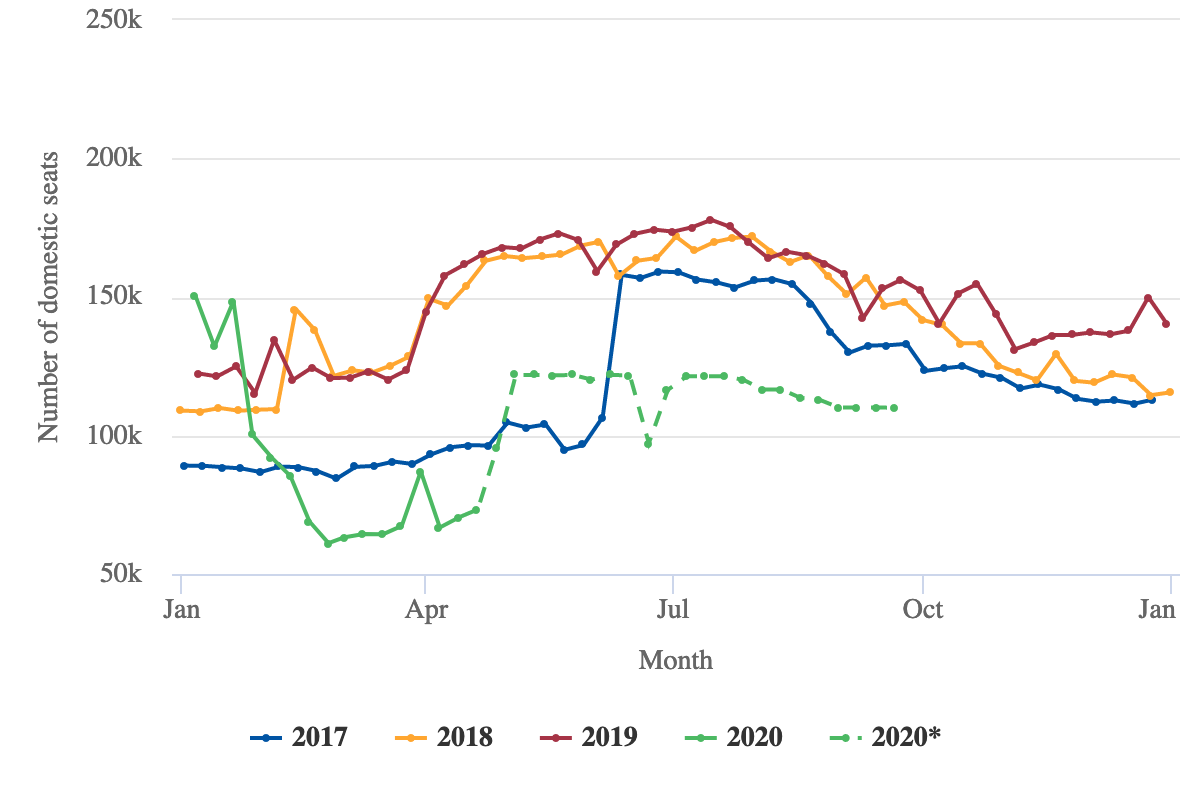 Vietnam's domestic market grew strongly in 2019, as competition intensified and its economy improved, but as the coronavirus struck, seat capacity quickly slumped in Mar-2020, down to about 20% of the previous year.

The recent week's capacity filings however suggest a belief that the worst is over. 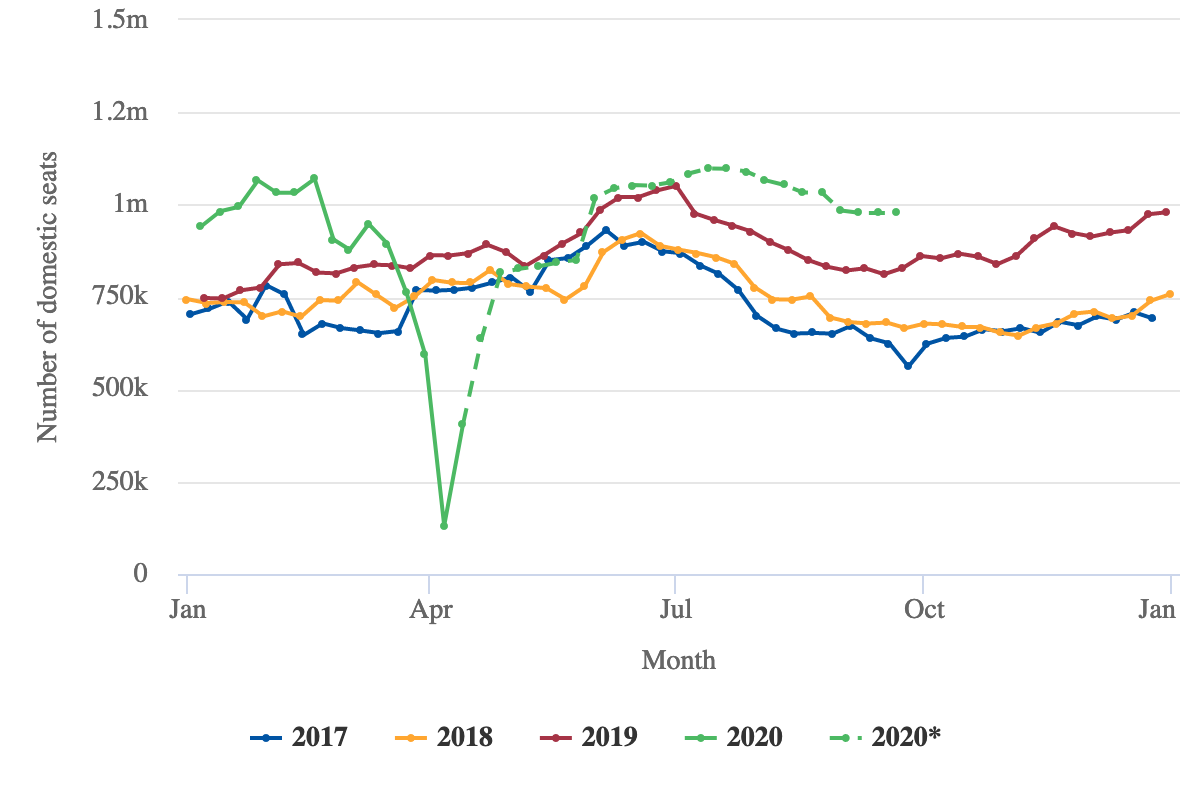 There is some room for uncertainty about the extent of the coronavirus' spread in Indonesia. Testing is limited and the sprawling country of 17,500 islands is potentially challenged if the disease spreads widely. For the time being, most cases are apparently confined to the capital Jakarta.

As of 6-Apr-2020 there were only 2,500 cases diagnosed in the country, but it has the highest death rate, perhaps reflecting a very low level of testing. According to local reports, the virus has spread to 32 of the country's 34 provinces and reporting is thought to be sporadic.

In Indonesia's case, a revival of airline capacity may actually not be what the country needs at this stage. 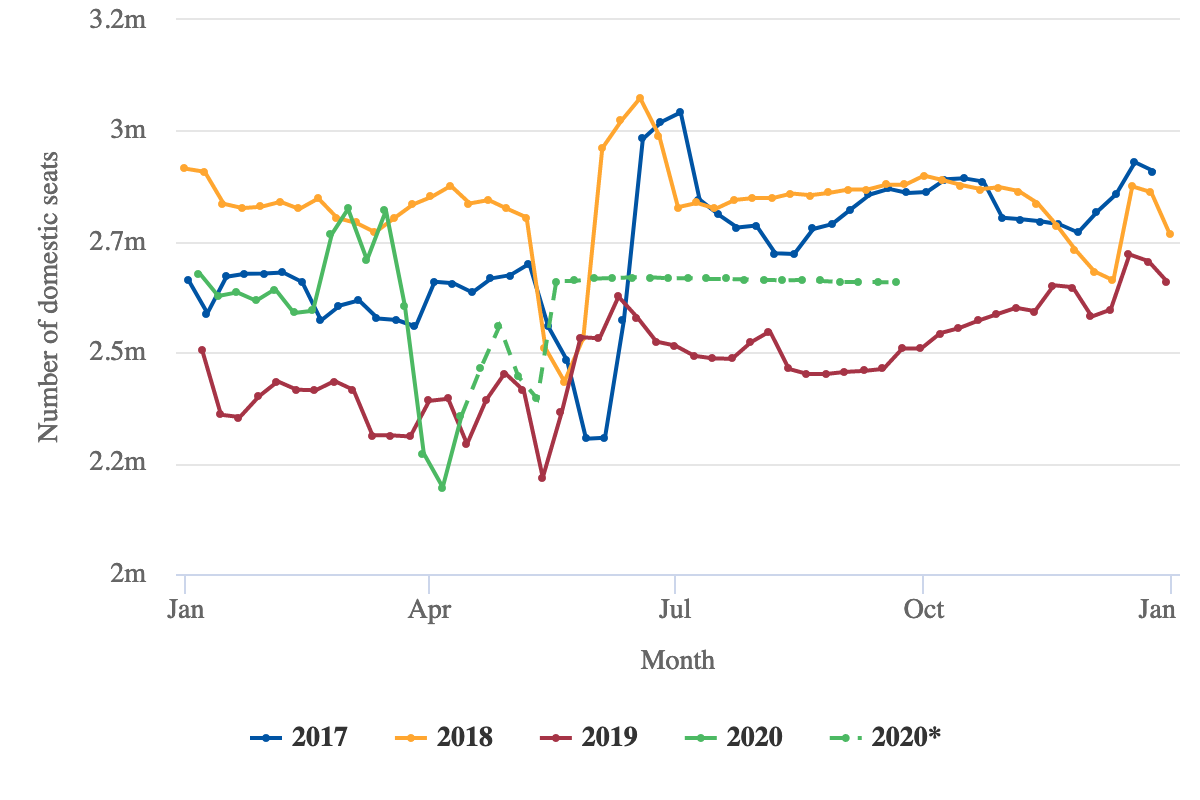 Malaysia's recovery path began in mid-Mar-2020 and, although the forward (dotted line) schedule filing shows a downward tilt, suggesting uncertainty about the state of infections in the country..

This is one of the few markets where there has been a revival of discussions about a merger of the two major airlines, Malaysia Airlines and AirAsia Group. The massive disruptive effect of COVID-19 will produce many outcomes which in previous times would have been difficult to achieve - or even inconceivable in the first place. 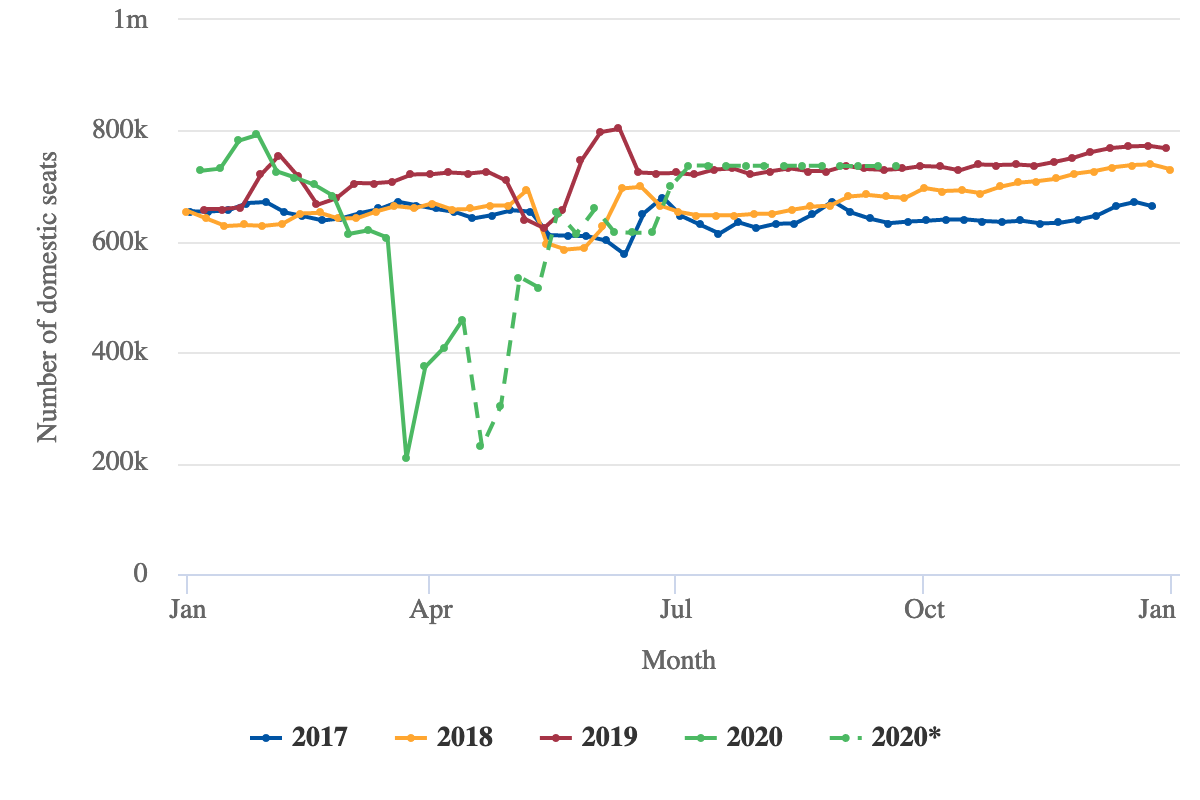 Japan remained hopeful of rescuing the Olympic Games until very late in the day, which may have created a reluctance to publicise infection levels, but its previously thriving domestic airline market has been badly hit. That decline occurred later than some of its neighbours and its recovery looks tentative at this stage.

As of 7-Apr-2020 there are suggestions that the government will declare a state of emergency, as numbers of infections and deaths now rapidly increase in Tokyo.

Consequently, n Japan's case in particular, it would seem premature to be calling a recovery just yet. 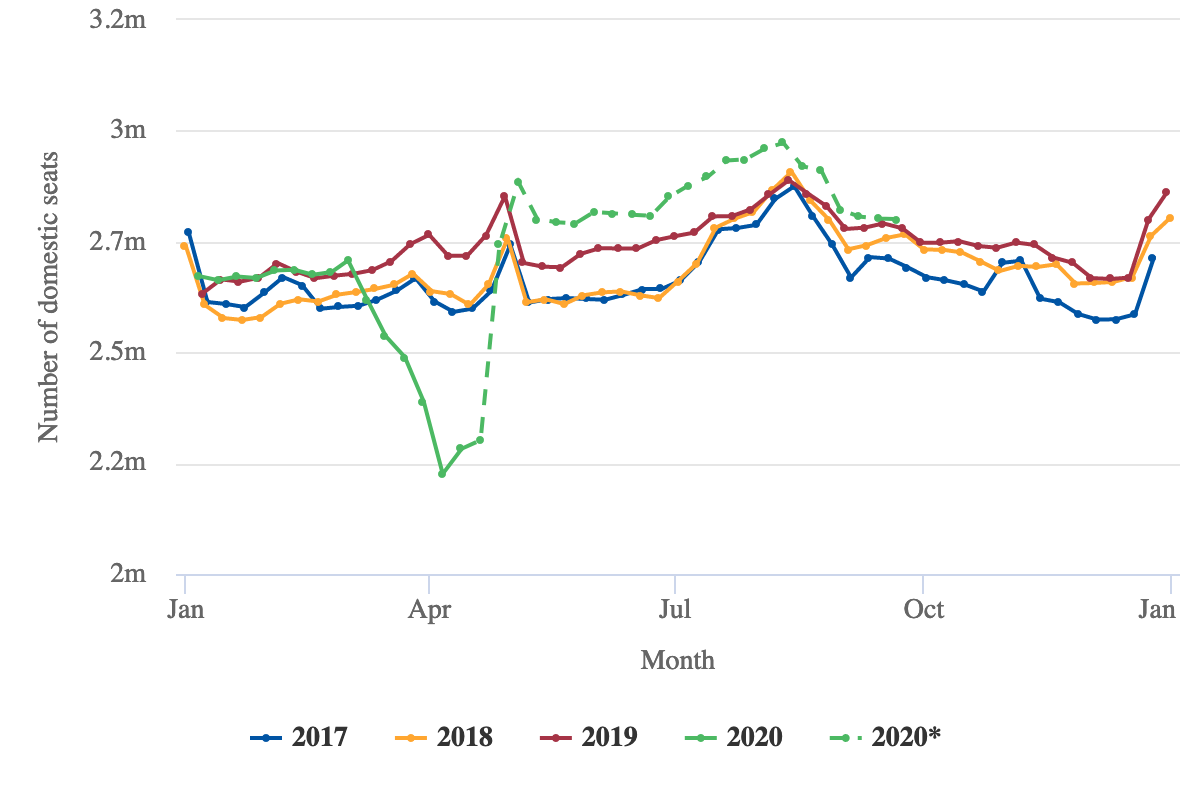 Optimistic, but still uncertain, signs of recovery across the region's large domestic markets

There are few expectations of a near term growth in international travel, even within Asia.

But there is some real cause for optimism in domestic markets now that borders have effectively been sealed. China, Korea and Taiwan have all taken strenuous and largely effective measures to contain the threat and are most hopeful of an early recovery.

China's recovery is the most optimistic, having been the first to suffer from the coronavirus effects, now expecting that the extensive measures taken to close it down have made it largely clear of infection. A desire to allow Chinese citizens some room to celebrate the May Day week holiday will hopefully not lead to a regeneration of the disease

South Korea, having acted promptly and effectively, is also optimistic about recovery, as is Taiwan.

In all cases however there is lingering concern that the virus may rear its head again, so at best this "recovery" is tentative for now. But the world will be watching for indications of the timeframe in which they too might expect to return to normality.