Copa Airlines unsurprisingly turned a strong 1Q2014 financial performance, bolstering its stature as one of the best performing carriers. Despite some lingering headwinds from withheld payments by the Venezuelan government, overall Copa enjoyed strong demand throughout its network as the carrier continues to leverage Panama’s favourable geography as a prime connecting point between North and South America.

The carrier is taking steps to mitigate volatility created by the Venezuelan government withholding payment to numerous carriers through capacity reductions designed to ease its exposure to Venezuela’s thorny currency management scheme.

While Latin America’s largest economies Brazil and Mexico continue to see slower rates of economic growth, Copa predicts a GDP increase of 2.7% for the region in 2014. The uptick is fuelling a relatively bullish outlook by the carrier, underscored by its estimated operating margin guidance of 19% to 21%.

Copa’s net income during 1Q2014 increased 23% to USD156 million driven in part by top line revenue growth of 11% to USD714 million. Expenses grew 7.6%, which was at a slower pace than the carrier’s operating revenues, resulting in Copa’s operating income growing 24% year-on-year to USD177 million. 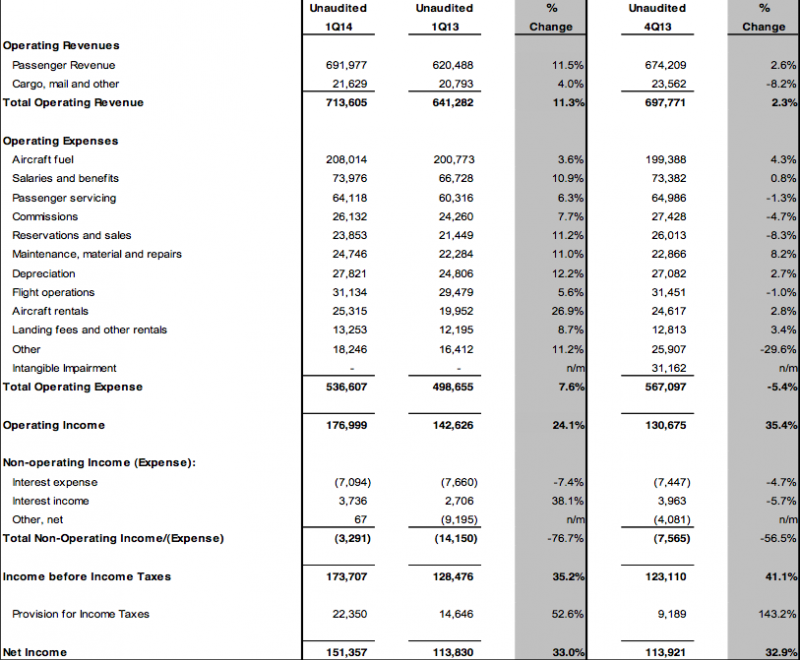 On a unit basis, Copa’s yields were essentially flat at 0.5% growth, and the carrier’s unit revenues increased roughly 1.9%. Copa’s average length of haul rose 3.7% year-on-year, and adjusting for that increase the carrier estimates yield growth of 2% and a rise in unit revenue of nearly 4%. 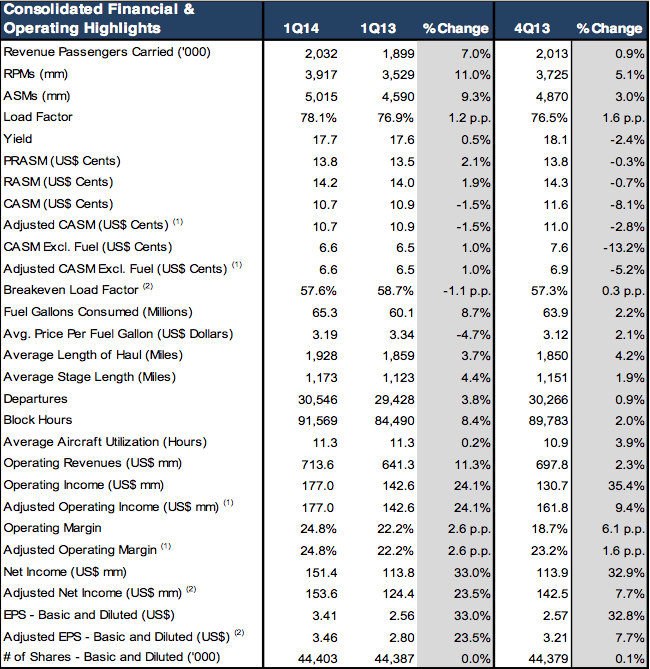 Throughout 2014 airlines have been attempting to recoup cash owed to them by the Venezuelan government, which has been tinkering with its currency during the last year largely through devaluation. Those actions resulted in low reserves of foreign currencies, and in order to keep some reserves on hand the government has withheld payments due to airlines serving Venezuela.

At one point Copa estimated that it had more than USD400 million frozen in Venezuela, and the carrier has not repatriated any of the cash during 2014. As of 31-Mar-2014 Copa held cash and equivalents of USD1.1 billion, representing 41% of trailing 12M revenues. Excluding cash tied up in Venezuela, Copa’s cash balances accounted for 23% of the last 12M revenues.

To prevent any more cash from becoming trapped in Venezuela, Copa has opted to cut its seats in the Venezuelan market by roughly 40% beginning in May-2014 and continuing through Jul-2014. Prior to capacity cuts Copa accounted for about 12% of international seat capacity in Venezuela, according to CAPA and OAG data.

Copa CEO Pedro Heilbron in a recent discussion with analysts remarked that the carrier’s actions in Venezuela are “a response to not getting paid. The demand is as strong as before.”

Essentially Copa is re-deploying some of the capacity “where we do get paid, where we don’t have those issues [lack of payment] even if it is a slightly lower margin,” said Mr Heilbron. Copa is balancing its reductions to Venezuela while attempting to keep a reasonable level of service to the market.

Mr Heilbron noted that the changes include reduced frequencies and aircraft downgauging. Copa operates Boeing 737-700s, 737-800s and Embraer 190s. The frequency cuts are on routes to Venezuela from both Panama and Colombia, where Copa’s subsidiary Copa Colombia is based. He highlighted more than daily service between Bogota and Caracas and from Panama City to Caracas, Maracaibo and Valencia would remain intact.

Prior to the cuts Copa offered approximately 15,600 seats to Venezuela from both Panama (11,200 return seats) and Colombia (4,400 return seats), according to CAPA and OAG data. Before the group started pulling back in Venezuela, its services to Venezuela represented roughly 5% of its total (Copa and Copa Colombia) seat capacity. As Copa's cuts to Venezuela take effect, its seat representation in the carrier's network falls to about 3%.

While the carrier plans to re-deploy the seats being cut from Venezuela into high-demand markets, Copa does forecast some slight margin pressure from the re-allotment of a 1ppt decline for the seven month period in 2014 where it will operate with a smaller footprint to Venezuela. However, Copa still expects to record CY2014 operating margins of 19% to 21% after posting margins of 19.8% in CY2013.

As it works to strike the optimal capacity deployment to Venezuela, Copa’s forecast of 10% capacity growth of CY2014 remains unchanged. The carrier is introducing three new markets this year from Panama City to Fort Lauderdale, Toronto and Georgetown, Guyana.

Mr Heilbron noted that Georgetown in particular had little connectivity to Latin America. As previously reported by CAPA, Georgetown is served by four foreign carriers. Caribbean Airlines, Fly Jamaica and Liat all serve the Caribbean from Georgetown, while Suriname operates service from Georgetown to Miami and its hub at Paramaribo. Given Copa’s vast network offerings from Panama, Georgetown has potential to spool up relatively quickly for the carrier.

Copa’s geographical diversification bodes well for its fortunes in 2014

Overall Copa holds a positive outlook for 2014 as Mr Heilbron estimated GDP growth for Latin America of 2.7%. Peru, Bolivia and Colombia should have growth rates of more than 4%, he remarked, while Panama’s GDP growth should reach 7% in 2014.

Presently Colombia accounts for about 15% of Copa’s international seat deployment while Latin America’s two largest economies Mexico and Brazil represent 9% and 8% of Copa’s international seats, respectively. The economic situation in those countries is a bit more tenuous, but Mexico is forecasting 3% GDP growth while Brazil’s GDP could increase by 2.5%. Given Copa’s geographical diversification, it should fare well in 2014 as it hints that more new markets may be in the offing.

Even before the recent capacity cuts, Venezuela was not among the carrier's six largest markets. 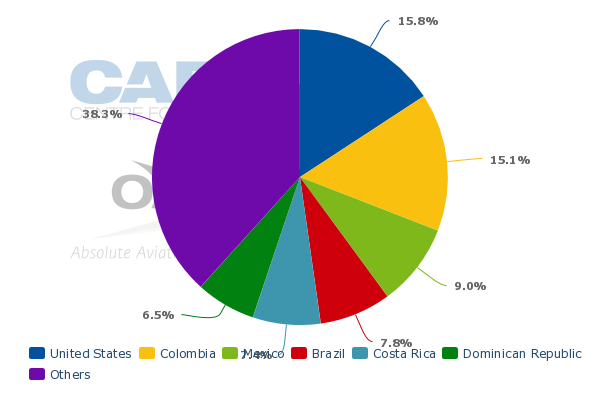 As the situation in Venezuela continues to drag on, Copa remains confident that it will secure the frozen funds. Mr Heilbron remarked the company was being patient, and that its expectations of a full payment have not changed.

Even as Copa adopts a patient attitude about its money being tied up in Venezuela, the country’s volatility will not make a huge impact in the carrier’s overall performance for 2014. Copa’s favourable position as the leading carrier at Tocumen International Airport, which is a prime location for connections to and from Central and South America, results in much untapped potential for the carrier. Copa’s ability to leverage its key geographical location makes the situation in Venezuela more of an annoyance than a significant challenge.