Copa to focus on expanding own route network; LAN signs agreement with Aeroasis; GOL down

North and South American carriers’ stocks were down again on Friday (07-May-2010) as wider markets continued to fall, resulting in the biggest weekly decline in more than a year. The Dow (-1.3%) moved lower as investors remained concerned over the European debt crisis, despite the Labor Department announcing job growth was at its fastest pace in four years in Apr-2010.

Latin American markets were also down with the US market, with the Brazilian Bovespa (-0.9%) and Chile’s IPSA (-0.5%) ending the session lower.

GOL (-1.7%) declined despite reporting a 4.5 ppts year-on-year improvement in load factor for Apr-2010, to 63.2%, including an 8.7 ppt increase in international loads, while domestic loads increased 3.7 ppts.

The improvement was the result of a 26.5% rise in passenger traffic (RPKs) on a 17.4% increase in capacity (ASKs).

LAN Airlines (-1.0%) confirmed it had signed an agreement with Aeroasis for the provision of technical support and service consultancy in the process of obtaining an operating permit from the Colombian civil aviation authority, within the established deadlines.

LAN stated that once Aeroasis obtains its operating permit, the Colombian airline may become part of the LAN group of airline operators through association and integration agreements, which would be submitted for review to the relevant authorities.

Copa Airlines (-0.4%) CEO, Pedro Heilbron, stated the carrier will grow through expanding its route network and increasing frequencies on existing routes rather than through a cross-border merger. The carrier, which has quadrupled its fleet to 56 aircraft since 1998 and operates to 45 destinations in 24 countries, has identified 30 further destinations for possible expansion, including three to four through 2010 into late 2011. Copa Airlines placed orders for 15 B737-800 aircraft last year and is targeting a fleet of 72 by 2012.

Also during trading, Copa Holdings announced Citibank has been mandated to arrange the Ex-Im Bank-guaranteed funding for five aircraft. Two will be delivered in May-2010 and the remaining three aircraft later this year, for which Ex-Im Bank has offered a preliminary commitment. The facility, totalling USD185 million, includes 12-year financing terms at very competitive rates. The facility will finance the remaining five aircraft scheduled for delivery to Copa Airlines in 2010.

Elsewhere, Alaska Air (+3.5%) was one of the day’s only gainers after Raymond James initiated coverage of the carrier with a “Strong Buy” rating and a USD60 price target. According to the analysts, revenue and profits for the group are in recovery. Raymond James predicts earnings per share of USD5.30 for FY2010 and USD5.55 for FY2011. 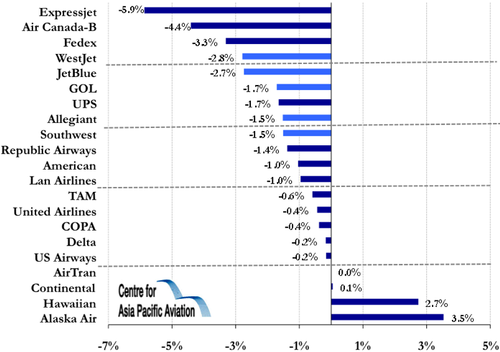