Perhaps the biggest question raised by the spread of low cost airlines, domestically and internationally, is whether the traditional full service airline model can survive. They almost certainly cannot in their traditional forms – or at least, not many of them can. That begs the question then of whether the remainder can, in their different ways, undergo a transformation into a more durable model.

The barriers to full service airlines transitioning to a low cost model, or even establishing subsidiary LCCs, lie in large part in the difficulty of changing existing structures and practices.  Ironically, perhaps, such changes may be more likely in the face of the current downturn.  The survivors may emerge looking more like LCCs than full service airlines, and consequently compete much more effectively with the newcomers.

Chapter 11 in the US, and bankruptcy, bailouts, or mergers in Europe may be the catalysts for jettisoning restrictive labour agreements, sidelining crippling pension commitments, streamlining marketing arrangements, updating equipment and realigning services.  The legacy airlines that survive may be the ones that can best jettison their legacies

Several full service carriers have, usually under full frontal attack from one or more powerful LCCs, attempted to transform themselves into a much lower cost airline, capable of competing with their still-lower cost competitors, but still able to cling on to a higher yield margin. Several have come close to achieving this goal. They include Aer Lingus, Air New Zealand and Malaysia Airlines and Philippine Airlines. In the US, several have, with the aid of Chapter 11 bankruptcy protection, had substantial makeovers; Continental and US Airways probably came closest to creating a survivable low cost competitive format.

The makeovers survived, and even prospered in the high yield/high fuel cost first nine months of 2008, but all are finding the going extremely tough in the tough economic climate of 2009, unable to maintain yield premiums, as passengers trade down.

Aer Lingus left the oneworld alliance in 2007 to establish a low-cost business model based on 41 Airbus aircraft and operating “high-end low-cost”, single class economy services to Europe and the United Kingdom, and a two-class service to the United States. The process was painful and at first appeared to be bearing fruit. A dispute between the government shareholder on one hand and Walsh and his management team (over equity rewards for the turnaround team) saw them depart and the subsequent difficult periods have seen Aer Lingus’ share price slide in imitation of its fortunes. 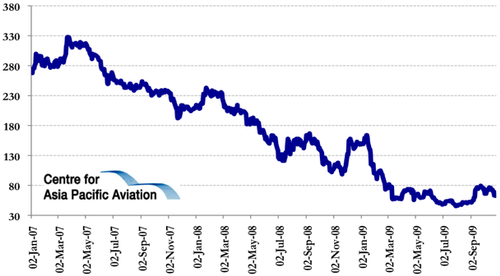 Low cost rival, Ryanair, has acquired 29.8% of the airline’s shares, although it recently failed to acquire the government’s remaining 25.4% share that would have given it control.

The commensurate restructuring of the unionised airline’s operations has been some time coming, and has yet to deliver the required savings.  A fuel cost-fired loss of EUR107.8 million in 2008 compared with a profit of EUR105.3 million in 2007.  Passenger numbers and RPKs were up (by 7.5% and 9.9% respectively) but capacity increased more rapidly (with ASKs up 13.9%) and average load factor fell (from 75.4% to 72.8%.  Passenger revenue grew by just 2.5%, short haul fares down 6.4% and long haul fares up 2.6% on the back of fuel surcharges.

Extraordinary costs of EUR140.9 million in 2008, related mainly to staffing changes, were incurred in 2008 have yet to deliver the increased productivity required to deliver sustainable profit.

Probably the most successful of conversions from legacy airline to a full service low cost format has been Air New Zealand (although more recently, Malaysia Airlines has also achieved major cost reductions).

Air New Zealand had little choice. After an ill-advised takeover of a much bigger airline, Australia’s Ansett Airlines, the privatised airline was forced into administration three days after September 11, 2001 when Ansett collapsed – although there was little connection between the two events; Ansett was a classic old style legacy airline which was overwhelmed by the entry of Virgin Blue.

The New Zealand government picked up the pieces and renationalised the flag carrier; today it remains in public ownership, except for a 10% of equity which is widely distributed. The reason: to secure international links and domestic competition.

The price of the NZD800 million bailout rescue was a massive revamp of the carrier’s operations. Air New Zealand was already familiar with low cost services; as noted earlier, it was the first to establish a low cost subsidiary, Freedom Air, eventually folded back into the parent last year. The logic was essentially that the headline carrier could perform all the low cost functions needed, suggesting that management at least believed that the conversion to low cost full service was largely achieved.

40% of management staff were cut within months, but the central recovery platform was to become a hybrid, with low cost, low frills service on domestic operations and an edgy long haul model, retaining three categories but removing first class, replacing it with upgraded business class, along with premium economy and standard economy. A rapid move to adopt cost saving IT solutions also reduced costs significantly – not hard off a base where almost no sales were online, but still dramatic.

Domestic was where the airline’s main revenue came from and the 2002 “Domestic Express” low frills, cut price operation therefore risked alienating loyal supporters. But fortunately the opposition (from Qantas) was still half hearted; the two carriers were by now actively seeking a merger – a wholly rational outcome for a country with a population of a little over four million and, according to Air New Zealand’s CEO, there was “no Plan B”; the smaller carrier had no chance of survival without folding into Qantas. However the competition authorities felt otherwise and rejected the plan.

The remodelling has been brave and surprisingly durable in fact. But the recent invasion of the carrier’s domestic market by both Virgin (Pacific) Blue and Jetstar is shredding yields on the only three main domestic trunk routes and all major city pair routes to Australia. Now, the cornerstone regional markets that Air New Zealand has dominated with ATRs is about to be assailed by Pacific Blue’s Embraer regional jets.

Air New Zealand has demonstrated remarkable resilience, helped by its small size and focussed management, but it does look as if it will soon be forced to succumb to the remorseless power of size. And, perhaps, logic. But then again it has defied doubters (including its former CEO) for years now…