Chile's President-elect Sebastian Pinera will take over from current President, Michelle Bachelet, on 11-May-2010, inheriting a country and infrastructure shattered by the 8.8 magnitude earthquake early on Saturday (27-Feb-2010). Mr Pinera is currently working with Mrs Bachelet to coordinate recovery efforts. The immediate challenge for the government will be on recovery and security efforts, before a major infrastructure rebuilding phase can commence.

LAN cancelled 17 domestic and international flights following the closure of Santiago Airport after the earthquake. However, operations outside Chile were as per usual. Santiago Airport partially reopened on Sunday (28-Feb-2010), allowing a limited number of flights to land only, including international and LAN services, due to damage to the terminal. A temporary terminal has been established in its place. Other airport infrastructure, including flight systems and runways, were not damaged.

Other domestic and foreign carrier services are being redirected to airports north of the country, including Mendoza, Argentina, where passengers are then being transported by ferry to Santiago. According Chilean air force commander, Ricardo Ortega, Santiago Airport will not completely open for another 48 hours.

Mr Pinera is in the midst of selling out of LAN. The carrier's stock gained 3.2% on Friday after Mr Pinera sold a 6.4% stake in the carrier to a Peruvian pension fund, for USD375 million.

Also last week, LAN majority shareholder, the Cueto family, agreed to purchase an 8.6% stake the carrier, or 29 million shares, through its investment vehicle, Costa Verde Aeronautica SA, from Mr Pinera’s holding companies, Axxion SA and Inversiones Santa Cecilia SA for USD17.23 each or a total of USD500 million. Costa Verde now owns a 31.75% stake in the carrier. Mr Pinera had offered the Cuetos a 21% stake in the carrier for USD1.2 billion. Costa Verde had first right to the shares before making them available to other investors between now and 09-Mar-2010.

Mr Pinera had planned to sell his remaining 11% stake to a small group of investors, although the timeframe may now be disrupted. LAN’s shares had been performing well, gaining 6.8% so far this year to Friday.

Elsewhere, Delta Air Lines (+2.1%) was also up after its price target was upgraded from USD15 to USD17 by Stifel Nicolaus the day prior, following a revision of expected financial results for the carrier in 2010. Stifel Nicolaus now expects the carrier to report a 11% year-on-year improvement in consolidated PRASM for the year, up from previous expectations of an 8.1% improvement.

Republic Airways (+14.5%) meanwhile was the day’s biggest gainer, after news the carrier has placed an order with Bombardier for 40 new aircraft. United Airlines (+9.5%) was also up.

North and South American carriers’ stocks moved higher with the wider market on Friday (26-Feb-2010), following news the US economy grew faster than expected in 4Q2009. The gain in airline stocks came despite a 1.9% increase in oil prices, to USD79.66. The AMEX Airline Index was up 3.5% at the end of trading. 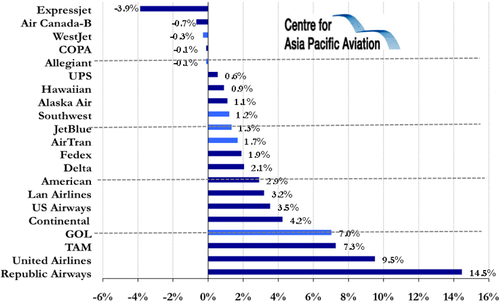