Cathay Pacific leaves its comfort zone but is tiny-volume fanfare a mere marketing or LCC strategy?

Cathay Pacific says it is pleased with its seat discount programme “fanfares” that turned a year old in Oct-2013, having sold about 140,000 seats during that time. But this is an exceptionally small figure: it accounts for less than half a percent of Cathay’s 2012 traffic. In comparison, AirAsia sells 140,000 seats every two days.

But strategically "fanfares" is important, and not just because it enables Cathay to clear inventory likely to go unsold. Cathay sees fanfares giving it greater relevance in the budget market, now in the limelight due to Hong Kong Express and Jetstar Hong Kong.

Fanfares, with its colourful and sometimes wacky marketing, is a brand stretch for typically reserved Cathay. Despite this, Cathay wants to expand the offering, in line with its view towards LCCs that the cheapest seats are the remaining unsold ones. But load factors are already high on the flights budget-conscious passengers want, giving doubt to this strategy.

Off the cards for fanfares is charging for luggage or any service that would detract from the existing “Cathay experience”, which the carrier is adamant about preserving - a reverse example of the mingling of concepts, rather than the preferred option of its competitors of dual branding.

The answer for Cathay may be looking beyond mere seats to have greater bundling on its website of extra services like hotels now that the carrier is settling in to its new and more expansive Amadeus system. With Cathay’s mighty brand, partners could be lining up for it, giving some credence to this plan – but only if the volumes are there in what is still a GDS-driven business.

New initiative is small but boldly leaves Cathay's conservative approach as it adopts LCC-like tactics - just how far can you go?

Fanfares, where limited and route-specific (and even date-specific) discounted seats go on sale every Tuesday morning, has been a brand stretch for Cathay. The marketing consists of a rainbow of colours while “fanfares” is officially uncapitalised. In short, fanfares is an initiative more at home at an LCC than perhaps any full-service airline worldwide.

It is not without coincidence that Cathay launched fanfares as LCCs started to become a common discussion in Hong Kong, with Jetstar Hong Kong making further progress in its application and as Hong Kong Express mulled transforming into an LCC. Cathay executives frequently offered fanfares as an example of what it was doing to target the budget segment other airlines were solely focusing on, even if fanfares in scale is not comparable.

Perhaps also not un-coincidentally, Cathay launched a series of anniversary celebrations during the first few weeks of Hong Kong Express’ re-launch as an LCC, effective from 27-Oct-2013. While again a small initiative, it is further stretching Cathay’s brand and moving it in the direction of LCC tactics as the carrier will drive a fanfares car around Hong Kong and offer free tickets to pedestrians who adopt a fanfares pose. 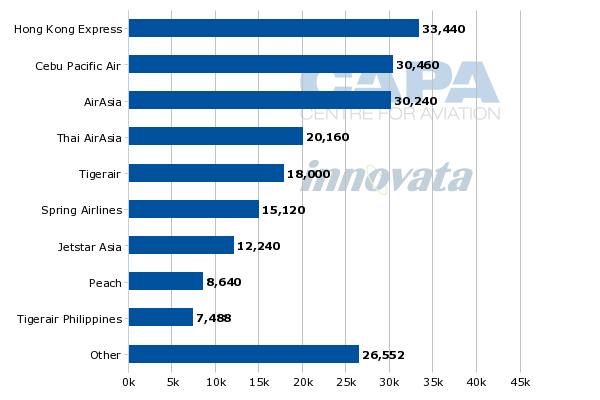 This new marketing approach is delivering results Cathay says it is pleased with, although exact details and statistics are few. Fanfares are driving traffic to Cathay’s website, a cheaper distribution channel than other platforms. Fanfares also help build demand for new destinations; Dragonair’s new route to Yangon features frequently in the fanfares offering. Cathay also had fanfares sell seats on its first few flights to the Maldives, which Cathay launched with a relatively short lead time.

Cathay has also noticed a larger than normal share of bookings are being made by females booking multiple tickets, although the airline is unclear if this is for friends or family.

Japan’s Peach Aviation has found that females are most likely to book leisure family trips, and Peach reckons its light brand – it has lots of purple – appeals to those holding the purse. So Cathay may very well be gaining greater or new reception in a segment it has not fully tapped, albeit on a small scale.

The LCC trend is no mirage, as Cathay managements once strongly promoted, nor has it always been lingering in the background, as Cathay seems to suggest by saying it already competes with numerous LCCs in Hong Kong and thus has no need to change. Since 2004, LCC growth has outpaced full-service growth in Hong Kong in all but one year. Empty seats are the cheapest seats to sell, but this has qualifications

Cathay’s most recent specific rationale for not having a low-cost subsidiary is that the cheapest seats to sell are those that are left unsold, a view CEO John Slosar affirmed recently at the World Travel & Tourism Council in Seoul.

It is true that Cathay’s first half 2013 load factor was 81.3% and that boosting load factors is a very profitable exercise. Over the past decade US carriers have increased their average load factor from 72% in 2002 to 82% in 2012. Etihad’s large portfolio of airline partners increases the channels selling its seats, and some 20% of its passenger revenue now comes from its 40-plus airline partners.

But load factors represent only averages. Cathay had a 79.5% load factor in 1H2013 for the popular Southeast Asia region but North Asia recorded only a 73.9% load factor. This does not necessarily mean there is greater opportunity to fill seats with leisure traffic: much of Cathay’s China network is to business cities. An industrial city like Zhengzhou may have a low load factor for Cathay but there is (currently) little leisure demand to it, unlike Osaka or Seoul – but to those cities load factors are high.

Even within routes load factors vary, as Monday morning and Thursday or Friday evening flights could be largely full while mid-week and mid-day flights are typically lighter. Mid-week or mid-day flights would be hard to sell without substantial price discounts. Cathay COO Ivan Chu estimates most fanfare tickets are sold at half the price of the average normal fares.

Cathay has so far found a handful of seats to sell under its fanfares programme. But expanding the numbers brings the challenge of where to find additional low-selling inventory that could be profitably sold - without cannibalising other product. Moving a fraction of a percent of capacity is good measure, but a serious initiative to discount seats ultimately raises the question whether discounted seats can or should be sold en masse on a high-cost platform – which Cathay is – or a new, lower-cost vehicle that makes it more profitable to sell cheaper seats.

Cathay is now considering how it can grow its fanfare programme but within certain boundaries. Any new offering or growth would still need to occur within what the carrier terms the “Cathay experience”. So a fanfare ticket will continue to receive Cathay’s spacious seats and premium service, just as all other passengers in the cabin do. Recently some of the lowest fare buckets were also made eligible for partial frequent flyer mile earning.

Tickets are sold only via Cathay’s website and call centre and not through third parties as this improves net yield and keeps the focus on Cathay’s direct distribution, which the carrier is keen to build.

What exactly the options are is unclear, but the outlay reaffirms Cathay’s basic views. The first is preserving its brand and positioning as a full-service premium carrier. Any service reduction on a fanfares ticket would jeopardise that. But this also highlights the contradiction of trying to have a (very small) low-cost strategy by discounting seats without any change of cost base. Relying on unsold seats addresses the cost component, but there are limited numbers of unsold seats that could reasonably be filled. And arguably there could be other ways for fanfare seats to be filled – and at potentially higher yields.

Second is Cathay’s unwillingness to embark on a dual-brand strategy with an LCC subsidiary. In fact, the further efforts to grow fanfares suggests Cathay will try every option, no matter how limited in scope, to avoid serious LCC discussions.

Growing fanfares will only detract, if only partially, from management bandwidth that could be better used elsewhere. Arguably the effort put in so far is disproportionately large compared to the small number passengers it has delivered. But Cathay appears to have painted itself into a corner now; though it possesses a very special brand, its insistence on pursuing a different course from all of its main regional competitors must surely raise questions about the validity of its strategy.

There is possibly another perspective. Growing fanfares may hinge on what Cathay can create as it settles into its relatively new Amadeus Altea reservation IT platform. The system is more powerful than the legacy and custom-built one Cathay had used, but some options are firmly off the table.

For example, British Airways is one of the more recent carriers to introduce hand-luggage-only fares. But Cathay does not expect to follow suit with this or any other option that would take service elements away as this would detract from the “Cathay experience”.

What is appealing to Cathay is looking beyond mere ticket sales. Airlines have generally lagged on selling ancillaries outside of the cabin environment. Few airlines for example are integrating on a large scale hotels, car rentals, packages and the like. Cathay sells fanfare tickets in conjunction with its holiday division, but IT limits have meant only a portion of the potential is being realised. Margins on such services can be high, and potentially more profitable than merely selling additional seats.

The intent is admirable. Airlines have passed up these opportunities as well as a host of others made possible by data. The focus at airlines has historically been on growth through capacity which in turn produces meagre returns; ironically IT is often a target for cost cutting. Indeed, IT was long neglected at Cathay. Additionally, Cathay has a highly renowned brand that would likely see a number of partners eager to work with it.

While the focus is welcome, such an initiative would largely be dependent on direct distribution channels, which are low. Combined with other factors, this means that for the foreseeable future fanfares will continue to be a minor contributor to Cathay’s volumes. It will have far greater significance in marketing and in being seen to respond to the budget market, which is finally set to grow after lagging in volumes compared to Singapore, which has similarities to Hong Kong due to the absence of a domestic market. 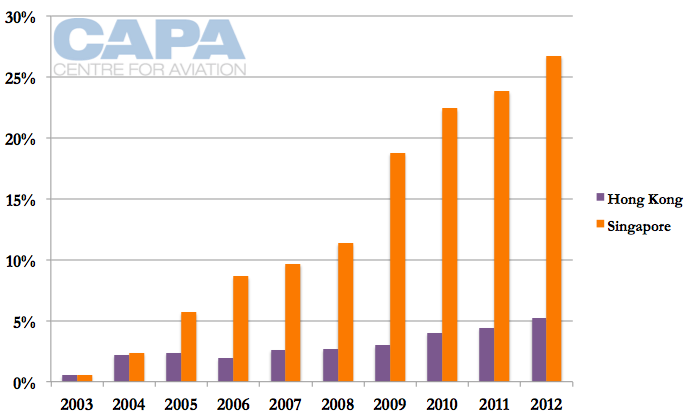 The potential for a Cathay low-cost strategy needs to be put into perspective. As hinted at above, the fanfares strategy in practical terms is really little more than a marketing game.

Ultimately, fanfares is useful as a marketing initiative, to clear a bit of inventory and give some relevance to the market.

But LCCs in southeast Asia today account for nearly two thirds of all seats flown, a pointer to what will almost certainly happen in northeast Asia, where LCC penetration remains in single figures. China has now announced it will introduce a new LCC policy shortly, with an undoubtedly important impact in accelerating the expansion of low cost products.

As a low-cost strategy for Cathay, a more earnest endeavour than fanfares surely awaits. This one is plainly not sustainable.