Beleaguered Caribbean Airlines is exiting highly unprofitable trans-Atlantic operations in early 2016 when it ends service from its Port of Spain hub in Trinidad to London Gatwick. The airline resumed London flights in 2012 but struggled to compete against European carriers.

The route should arguably have ceased at least two years ago as Caribbean Airlines has been loss making for years amidst pilot unrest, numerous executive changes and increased competitive pressure on key North American routes. Part of the reasoning for cutting the long-haul flights is to compete more strongly with LCCs on strategic North American routes including Fort Lauderdale, New York and Toronto.

Caribbean Airlines finally appears to be taking some rational steps toward achieving profitability as subtle shifts are occurring in the aviation landscape within the region. As Caribbean Airlines shrinks in the hopes of turning a profit, the already profitable InselAir Group is becoming a powerful force in the Caribbean with its latest push from hubs in Curacao and Aruba.

Caribbean Airlines, which purchased Air Jamaica in 2010, opted to return to London in 2012 after Virgin Atlantic cut service from Kingston to London Gatwick. Air Jamaica axed Kingston-Gatwick in 2007 and began codesharing with Virgin Atlantic after reportedly incurring losses of USD27 million on the route in 2006.

More than a year ago, Caribbean Airlines’ owners, the governments of Trinidad and Tobago, admitted the London route had not been profitable, and that the airline’s board had undertaken a review of Caribbean Airlines' network.

Caribbean Airlines has faced formidable competition on its route to London. British Airways operates flights from Gatwick to Port of Spain with a stop-over in St Lucia, and numerous other European airlines serve the Caribbean.

Data from CAPA and OAG for the week of 24-Aug-2015 to 30-Aug-2015 show that Caribbean Airlines accounts for only 1% of the seats offered between the Caribbean and Western Europe. Air France and Air Caraibes each account for about a 15% share, British Airways an 8% share, Virgin Atlantic a 7% share, Air Europa a 6% share and Condor and KLM each hold about a 5% share. 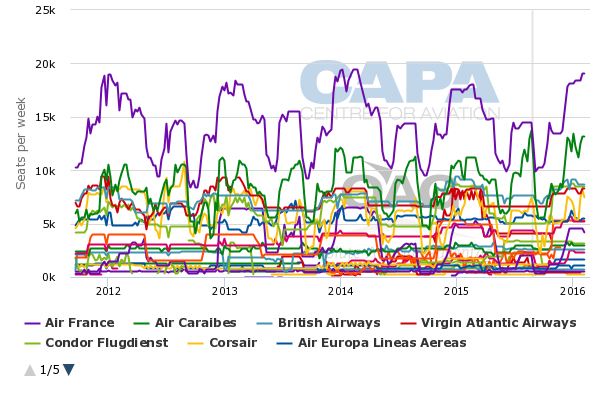 Caribbean Airlines is finally opting to behave rationally, with plans to end the Gatwick route in early 2016 and return the two leased 767s to ILFC. Shedding the widebodies will cut Caribbean Airlines’ fleet types from three to two (Boeing 737-800s and ATR turboprops), driving cost reductions.

Caribbean Airlines reduces 737 fleet as two US routes are dropped

The airline is also paring down its 737 narrowbody fleet. According to the Jamaica Observer, Caribbean Airlines has already returned two -800s in 2015 with two more expected to be returned.

In addition to cutting the long-haul flights to Gatwick, Caribbean Airlines plans to eliminate service during 2H2015 from JFK to Grenada and Kingston to Orlando. It already suspended service from Georgetown to Toronto ended in early 2015.

Caribbean Airlines is the only carrier operating from Kingston to Orlando, and competed with upstart Fly Jamaica on service between Georgetown and Toronto. JetBlue recently launched service from JFK to Grenada.

Caribbean Airlines has seen increasing competition from JetBlue during the last couple of years, which has pressured Caribbean Airlines’ competitive standing. JetBlue has broken Caribbean’s monopoly on service from Port of Spain to JFK and also added service from Port of Spain to Fort Lauderdale. Presently the two airlines offer about 2,100 weekly one-way seats on the Port of Spain-Fort Lauderdale route with JetBlue holding about a 49% share and Caribbean retaining a 51% share.

JetBlue now competes with Caribbean Airlines on four of its six top North American routes. Other competitors include Canada’s second largest airline WestJet on Port of Spain-Toronto service, and Spirit on service from Fort Lauderdale to Montego Bay.

Delta also operates from JFK to Montego Bay and American offers flights from its Miami hub to Port of Spain. Caribbean Airlines holds a seat majority on four of the routes – Port of Spain to JFK and Toronto, Kingston to JFK and Fort Lauderdale to JFK. 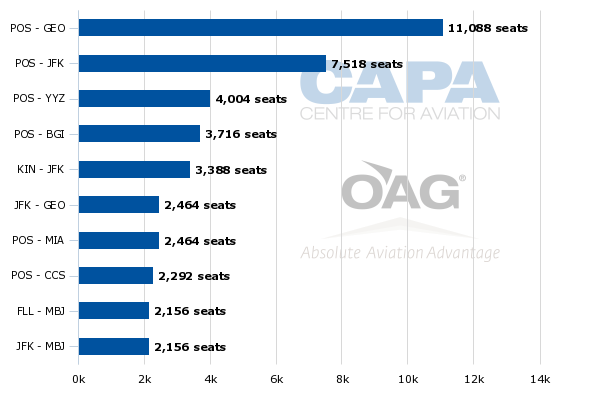 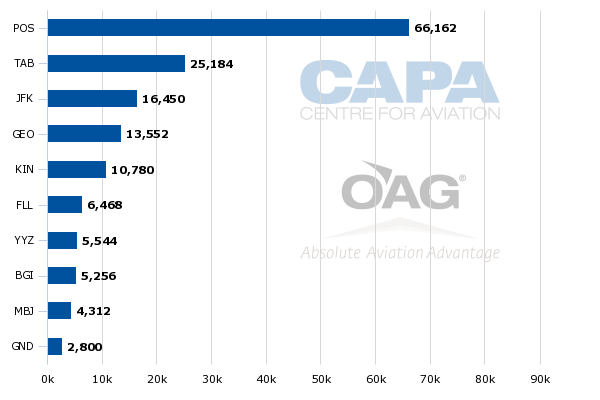 Although Caribbean Airlines appears to be cutting some routes outside of its Port of Spain hub that aren’t viable in order to focus on its core North American markets, the added competition from JetBlue is no doubt proving to be tough. JFK and Fort Lauderdale are JetBlue’s first and third largest bases, respectively, based on seat deployment. That allows JetBlue a strong point of sale on its Port of Spain routes.

JetBlue is also now the largest airline between North America and the Caribbean, holding about a 24% seat share. The Caribbean is a strategic area for JetBlue, and it plans to continue its expansion in the region. Caribbean Airlines has only a 5% share of capacity between the Caribbean and North America and its overall seats are down 8% year-on-year, reflecting the shrinking of its 737 fleet. 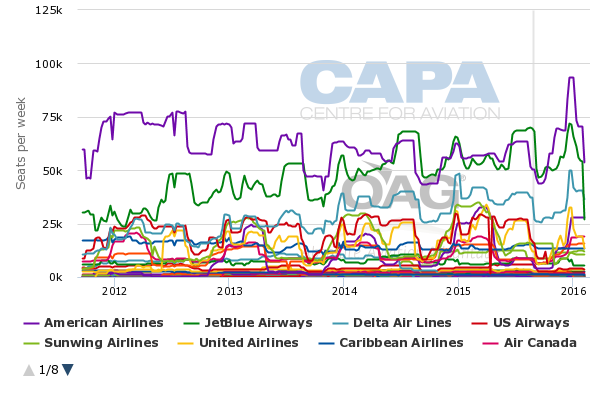 Even as Caribbean retains a higher seat share in some markets where it competes directly with JetBlue, its rival is in a much stronger financial position, and can likely undercut Caribbean on some of its fares.

By Nov-2015 InselAir is projected to operate non-stop flights to 22 destinations from Curacao and 19 from its newer hub in Aruba. The InselAir Group is slowly building more network breadth than the other large airline groups in the Caribbean. Insel currently has 23 destinations and will have 27 by the end of Nov-2015.

Source: CAPA-Centre for Aviation and OAG

CAPA has previously concluded that InselAir Group should become Caribbean’s second largest airline group by the end of 2015 based on seat capacity. Caribbean Airlines still has about twice as much capacity as Insel but Insel is rapidly closing the gap as it expands while Caribbean shrinks.

It is impressive growth for an airline that launched in 2006 and only launched its affiliate in Aruba in late 2013. The trajectory of family-owned InselAir Group is in sharp contrast to government owned-Caribbean Airlines, which has been mired in losses and executive upheaval. Its takeover of Air Jamaica was supposed to help Caribbean chart a course to becoming the flag airline of the region, but instead it has slogged along without much focus.

After posting a USD60 million loss in 2014 (according to the Jamaica Observer), Caribbean Airlines is attempting to make some moves toward sustainability with route and fleet adjustments. The airline has reportedly developed a plan to break even by 2017, a goal which will be challenging to complete but is more tangible following the recent cuts.

The perpetual challenge for Caribbean Airlines always lies in execution. In many respects it has been its own worst enemy. The re-launch of long-haul flights was never logical.

Now Caribbean Airlines faces strong competition from North American airlines eager to continue to leverage leisure and VFR traffic demand for the region. Its hopes of starting a new chapter of Caribbean aviation by rising to become the flag carrier of the region have largely evaporated. Caribbean Airlines now needs to focus on survival.