This six-monthly update of the CAPA world airline operating margin model continues to expect industry margins in 2015 to 2017 above previous cyclical peaks, albeit falling slightly in 2017. This is in spite of unexceptional global GDP growth, which has not regained its long term trend rate since 2010.

The higher level of airline operating margin from a given GDP growth rate has been due to several factors. Lower oil prices have played their part, particularly since mid-2014, as does a higher level of global traffic growth than would previously have been expected from relatively sluggish GDP growth. In addition to these external issues, perhaps the most significant factor is a greater degree of capacity discipline. This is now most deeply rooted in the US, which is now by far the most profitable airline region, helping to drive the global result.

On a more cautionary note, the IMF has recently cut its global GDP forecasts, citing Brexit and other geopolitical risks. In addition, profit warnings in recent weeks from IAG, easyJet and Lufthansa are a reminder that cyclical upswings do not last forever. A test of the airline industry's improved profitability will be its resilience in a downturn.

GDP forecasts come from the International Monetary Fund (the CAPA model uses GDP growth at constant prices and at market exchange rates), published on 19-Jul-2016. Brent crude prices are taken from the most recent monthly consensus poll by Reuters. Forecast growth in the global fleet is based on CAPA estimates (with thanks to Airline Monitor for historic data).

The model's outputs are the world airline RPK growth and industry operating margin. The model projects operating margins throughout the period 2015 to 2017 that are comfortably ahead of previous cyclical peaks that have not exceeded 6% since the 1960s.

For more on the key elements of the model and how it works, see the following report:

The main differences between CAPA's Jul-2016 model and the above referenced Jan-2016 version are as follows:

The IMF's 19-Jul-2016 global GDP growth forecasts were another downward revision, representing the latest in a series of cuts over the past 18 months. It first published a forecast for 2016 world economic growth in Oct-2014, since when it has cut the forecast four times. Its 2017 forecast was first published in Oct-2015 and has been cut twice – in Apr-2016 and in Jul-2016.

The IMF cited Brexit as being the main reason for its latest downward revision, saying that the UK vote to leave the European Union had caused a substantial increase in economic, political and institutional uncertainty, especially in advanced European economies.

The Fund added that it was very difficult to quantify the potential repercussions, a hint that even the new forecasts come with considerable uncertainty. Indeed, in addition to its baseline forecasts, it produced 'downside' and 'severe' scenarios that could cut a further 0.3ppts from its 2016 GDP growth forecast and 0.6ppts from its 2017 forecast.

The lower GDP growth forecasts lead to the lower RPK growth forecasts now in the CAPA model. Recent geopolitical events – not only Brexit, but also recent terrorist attacks in several countries, the Zika virus and the attempted coup in Turkey – contribute the uncertainties that are gathering over the outlook for demand in the airline sector.

Relationship between global GDP and airline margin has improved

However, since 2011 there has been a significant divergence between world GDP growth and the operating profit margin of the world airline industry. For a given level of GDP growth, the world's airlines now seem to be able to generate a higher profit margin than in the past. 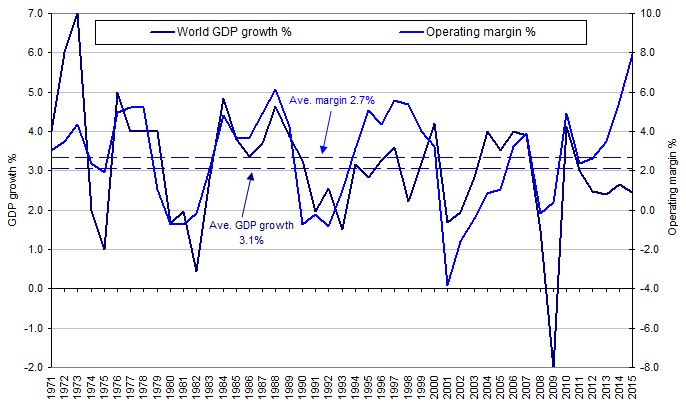 Profitability has been helped by better RPK growth

A given level of global GDP growth has produced a higher level of RPK growth in recent years than in the past. Although GDP has been sluggish in recent years, average global RPK growth was 6.7% in the period 2011 to 2015, above its long-term average of 6.1% (for 1971 to 2015). 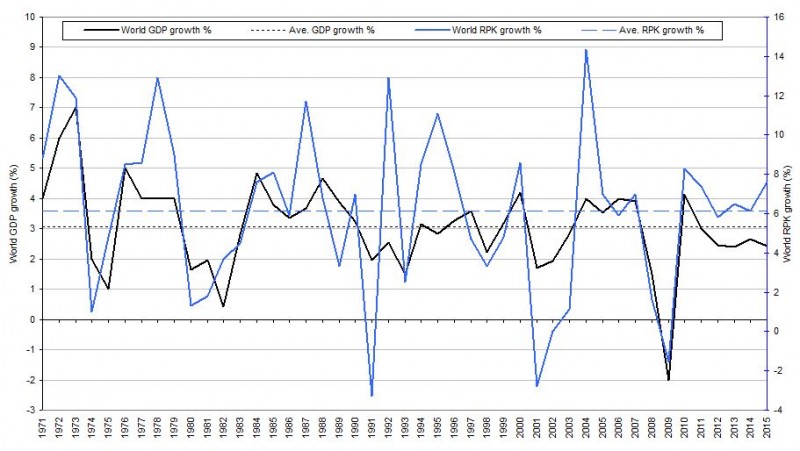 (2) the growing share of LCCs and the consequent stimulating impact on demand growth of lower fares.

The growing importance of faster-growing emerging markets – particularly Asia Pacific and also the Middle East – is illustrated in the chart below, which shows the share of global RPKs for airlines from each of the main world regions (source: CAPA analysis of data from Airline Monitor).

Latin America has stayed at 5% of RPKs and Africa has fallen from 3% to 2% over this period.

Taking capacity to be the size of the global airline fleet, this has been growing much more slowly in recent years than in previous decades. Average fleet growth for 1971-2015 was 4.4%, but the average fell to only 3.2% in the period 2006 to 2015.

In the early 2000s fleet growth headed down, following the downturn in the airline profit cycle much as it had done in previous cycles. Fleet growth bottomed out in 2003 and 2004 at 3.5%, before starting to turn up again in 2005. However, rather than following its previous cyclical pattern of climbing as high as 6%-7%, it then turned down again.

Global fleet growth only rose above its 2003 and 2004 level in 2014 and 2015. This decade of low fleet growth came just after the previous cyclical downturn, giving 14 consecutive years when it remained below its long-term average of 4.4%.

The upturn in fleet growth over the past two years gives some cause for concern. In the past, peaks in fleet growth typically heralded a trough in airline margins. However, with forecasts of 3.8% in 2016 and 4.0% in 2017 it is set to remain below its long-term average. 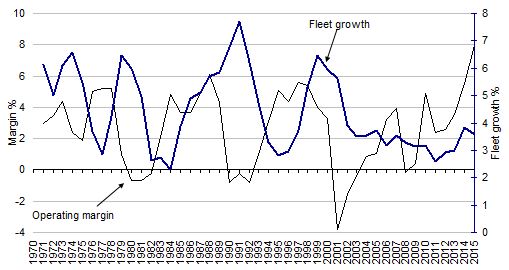 US airlines' capacity discipline has been tightest

Greater capacity discipline, as defined by low fleet growth, has been most strikingly evident in the more consolidated US airline industry. Although the global fleet has never fallen in size from one year to the next, airlines in the US collectively reduced their aircraft numbers in seven out of the eight years from 2006 to 2013.

The chart below shows annual growth in the commercial jet aircraft fleets of airlines in each of the main world regions from 1991 to 2015. 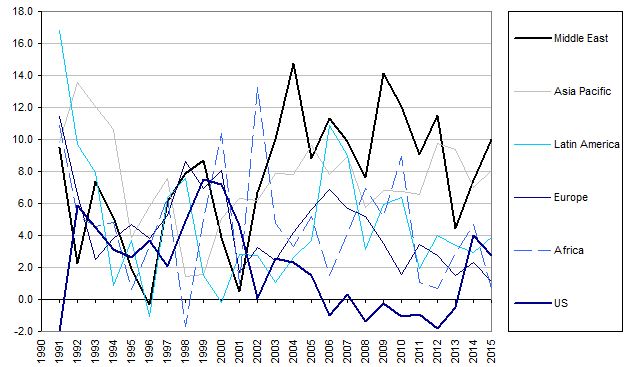 Although US growth resumed in 2014 and 2015, the US fleet was only back to its 2005 size in 2015. The crisis following 9/11 triggered a bout of restructuring, facilitated by Chapter 11 bankruptcies, which motivated the US airline industry's capacity restraint.

This was further tightened by a series of mergers leading to a more concentrated market structure than elsewhere.

The rest of the world's airlines continued to grow during this period, but at moderating average rates of growth. The global fleet in 2015 was 37% bigger than it was a decade earlier, but this represented a much lesser increase than the 54% growth over the decade before that: 1995 to 2005 (the global fleet had grown by two thirds between 1985 and 1995).

The slowing of global fleet growth, particularly since the start of the 21st century, owes much to the US airline industry. However, airlines from Europe, Latin America and Africa have also slowed their average fleet growth rates in each decade since the 1990s.

Airlines from the Middle East have the fastest average growth rate in the current decade so far, closely followed by Asia Pacific. These are the only two regions where average fleet growth this decade is higher than in the 1990s. 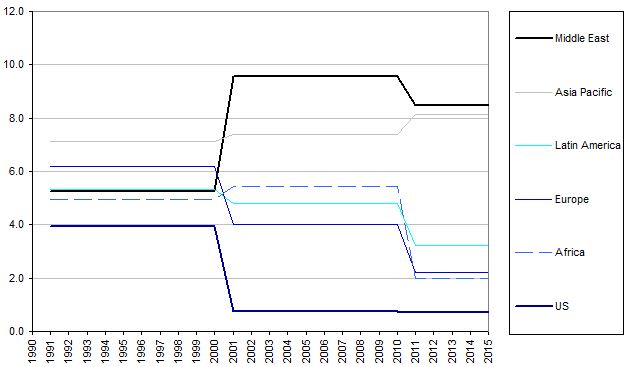 North America's multi-year period of greater capacity restraint (slower growth) and higher market concentration resulting from the mega mergers of recent years have had a profound effect on the profitability of its airlines. Previous CAPA analyses have examined the link between market concentration and profitability for the different regions of the world airline industry.

In USD terms North America's airlines made more than half (54%) of the world airline industry's operating profit in 2015 (they accounted for 70% in 2014), compared with well under one third (28%) in 2011, so that the region is now the major driver of global airline profits.

The improved profitability of US airlines is a rising tide that has carried the global industry to record high margins. 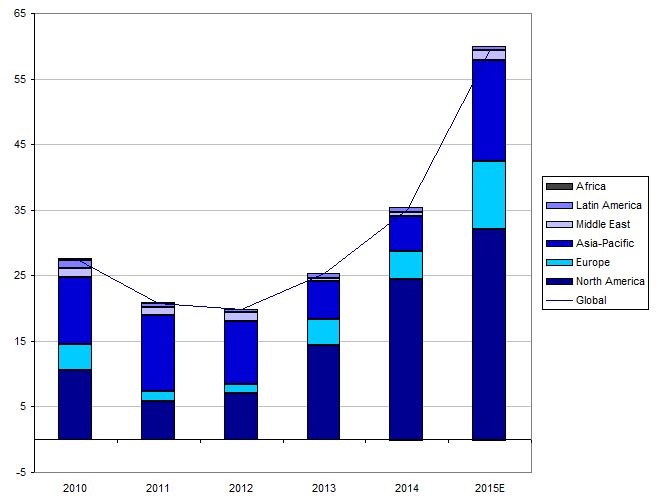 In addition to the rising share of faster-growing regions in global airline traffic and the beneficial impact of greater capacity discipline and US market concentration, global airline margins have also been boosted since 2014 by lower oil prices.

In the period 2003 to 2007 oil prices and airline margins both rose together, thanks to a good supply/demand balance and the ability to raise fares. Since 2007, however, airline operating margins and fuel costs as a percentage of revenue have followed a broadly inverse relationship.

In spite of a noticeably falling yield environment, the sharp rise in global airline operating margins since 2013 is at least partly attributable to the fall in fuel costs as a percentage of revenue. This fell from 32% in 2013 to 25% in 2015, and CAPA expects it to fall further to 18% in 2016 before rising to 20% in 2017.

World airline industry operating margin and fuel costs as a percentage of revenue: 1971 to 2015

The present combination of healthy traffic growth, low oil prices, capacity restraint and moves towards market consolidation has created conditions for record airline industry profitability. This has been aided by the evolution of business models, stimulated by LCCs, that are directed towards a more cost-efficient approach, gradually leading to improved labour productivity.

These trends have also been encouraged by greater levels of private sector ownership of airlines than in the past and developments in airline industry liberalisation.

Nevertheless, although industry profitability may have undergone a structural improvement, the airline business remains cyclical and is unlikely to retain peak margins indefinitely.

Indeed, the CAPA model predicts a modest decline in operating margin in 2017, albeit to a level that would still be higher than in any previous peak since the mid-1960s. As flagged in CAPA's Jan-2016 profit outlook report (referenced above), current conditions appear fertile for new entrants and any surge from new competitors could start to spoil the party.

If a downswing in the cycle is approaching, the extent to which the industry is able to limit the slump in margins will be a signal of how much it has truly changed for the better. Governments and regulators will need to resist any urge to raise protectionist barriers in a downturn.