In a Jan-2016 report on the world airline profit outlook, CAPA flagged the potential emergence of ideal conditions for new entry into the airline sector. Barriers to entry have never been very high compared with some other capital-intensive, cyclical industries. Access to aircraft and finance is probably the most important pre-requisite, and it does provide at least something of a barrier.

However, the effectiveness of access as a barrier has been weakened by factors including a long term increase in the importance of lessors (and their fondness for ordering aircraft before securing a customer), historically low interest rates, and the large volume of aircraft orders and deliveries over the past decade. Nevertheless, new entry is at historically low levels and has not picked up since the global recession.

This report considers the main barriers to entry for airlines and, in particular, examines data on the relationship between the annual number of new entries and together -  fuel costs and interest rates. Low oil prices have extended the life, and therefore the availability, of older, cheaper aircraft. This could provide the spark to ignite a resurgence of new starts.

The long term trend towards increasing importance of leasing to the world commercial airline fleet (see chart below) has increased the availability of aircraft. Aircraft are moveable assets and, even if an aircraft operator cannot profitably operate them, they can be sold on to another.

One consequence of this is that lessors make a proportion of their orders without a confirmed customer in mind. As the cycle turns through its ups and downs, this can often mean that unplaced aircraft become available on very favourable terms. 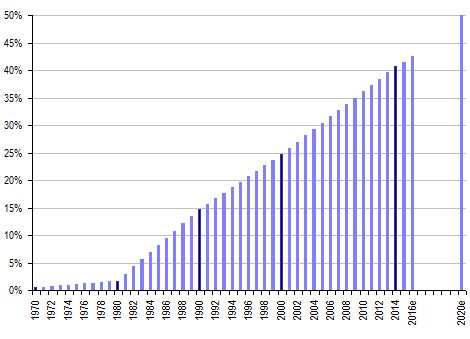 Consistent historical data on the global number of new entry airlines are not easy to collate. One of the few available sources, based on a form of crowdsourcing, is Wikipedia, which has data on the number of new airlines established (and the number that have left the market) over the past 100 years.

This may understate the numbers (certainly by comparison with the total number of IATA airline codes) and it does not put them into context by reference to the overall number of airlines in service each year. Nevertheless, the annual data are presented in the chart below. The broad sweep of the data should reflect the overall trends. 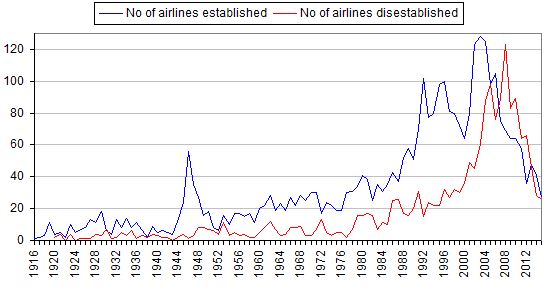 The historical peak in new start airlines in 1946, after the end of World War II in 1945 and the Chicago Convention in 1944, can clearly be seen. Numbers were then fairly volatile, but broadly stable until the 1980s and 1990s, when private entry began to grow and entrant numbers embarked upon a sharp upward path. This growth in new entry from the 1980s coincided with the first major step up in the proportion of aircraft that were leased (see earlier chart)

The increase in new airline entries was also stimulated by deregulation, first in the US domestic market (in 1978), and then in the intra-EU market progressively through the 1990s.

New entry numbers have been on a downward trend since 2003

The absolute peak was reached in 2003. Since then the number of airlines entering the market globally has been on a downward trend, with the average from 2010 to 2015 being just 46, only a little higher than in the 1980s.

The downward trend in new entry has continued after the global financial crisis, in spite of the recovery in industry profitability, the availability of cheap money and, more recently, the fall in oil prices.

The outcome of the recovery from the crisis has been that the annual number of failures has reduced since the peak of 123 exits in 2008. Net new entry (number of new entrants minus number of failures) has again been positive since 2013, but only at very low levels by historic standards.

In order to try to understand why there has not yet been a significant resumption of new airline entries into the market, it is necessary to look at two factors that influence new starts. These are oil prices and interest rates.

New entry is inversely related to fuel costs, but not consistently

There does seem to be a loose inverse relationship between airline fuel costs as a percentage of revenue and the annual number of new entry airlines, as might be expected (see chart below). However, this relationship is far from exact, which is also to be expected, since there are also other factors influencing new entry. In particular, the number of new entrants has not picked up again as fuel costs have fallen in 2014 and 2015.

The correlation for failures has however been more evident. The annual number of airlines disestablished has shown a closer relationship with fuel costs as a percentage of costs, at least since the 2000s (see chart below). As fuel costs rose through the early 2000s to their 2008 peak, so too did the number of airline failures.

Perhaps unexpectedly, the 2012/2013 mini peak in fuel cost as a percentage of revenue did not spark another rise in market exits. Nevertheless, the relationship between the two has followed its expected path in 2014 and 2015, with both falling.

Number of new airlines established, number of airlines disestablished, and airline fuel costs as a percentage of revenue 1979 to 2015 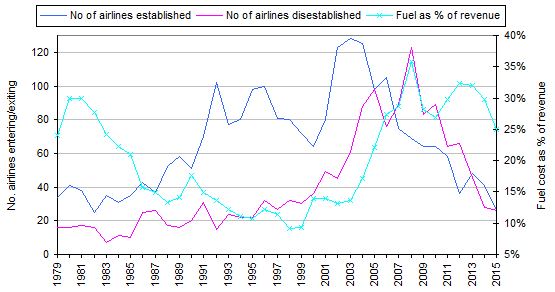 The net number of new entrants has varied roughly as might be expected with changes in fuel cost as a percentage of revenue - that is with an inverse relationship (see chart below).

This gives a better result than using the gross number of new entrants in the previous chart. However, even this adjusted number did not behave intuitively in 2015, when net new entry fell in spite of the fall in fuel costs. 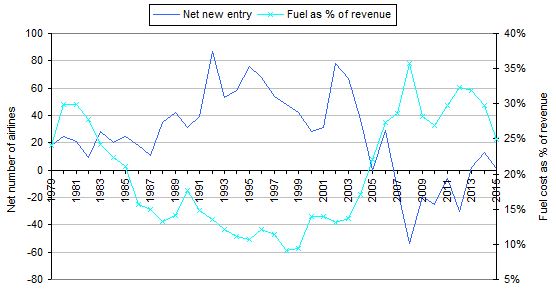 The relationship between the annual number of airline new entries and interest rates is also not entirely straightforward, looking at the long term history. Interest rates vary widely across the world, but the US benchmark interest rate - the federal funds rate - is probably the simplest single indicator of the trends in the cost of finance available to the world's airlines.

As the chart below indicates (note that the federal funds rate is shown on the right hand axis in reverse order), new entries and interest rates moved together as might be expected through the period from the early 1980s to just before the global financial crisis. Although neither followed a straight line, for most of this period interest rates were falling (from around 16% in 1981 to just over 1% in 2003) and, at the same time, the number of new airlines rose. Then, from 2003 to 2007, interest rates rose and new entry numbers fell.

However, after 2007, as interest rates continued their drop to historically low levels close to zero, new entry did not resume its growth, but continued to fall. Moreover, in the period before the 1980s, interest rates were on a broadly rising trend, while new entry was flat to rising.

To a degree, these two apparently anomalous periods can be explained by adjusting interest rates for inflation. Before the 1980s, inflation was largely increasing, which means that real interest rates were broadly stable, when new entry levels were also more stable. Since 2007, inflation has in general been falling (especially since 2011) and real interest rates have been rising over the past four years, coinciding with the continued fall in new entry.

Number of new airlines established, number of airlines disestablished, and US federal funds rate* % 1979 to 2015 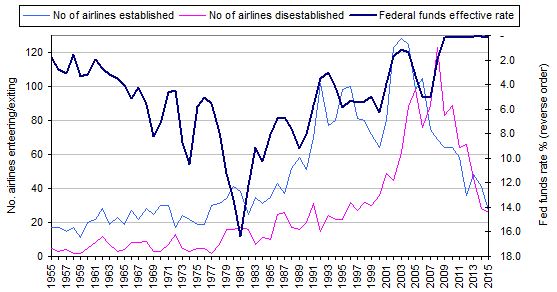 But falling interest rates do not always prevent airline failures

The rising trend of airline failures that accompanied falling interest rates from the early 1980s to the early 2000s (see chart below) is counter-intuitive. However, there are two possible explanations.

One is that the increase in market exits merely reflected the growing size of the industry. The second is that, although lower interest rates may have encouraged new entry, they did not change the very competitive and financially challenging nature of doing business in the airline sector.

It is one thing to enter the industry, but it is quite another to sustain a successful business model. Moreover, as noted above, there was also an increase in fuel prices in the latter part of this period. More recently, falling interest rates have coincided with fewer airline failures. 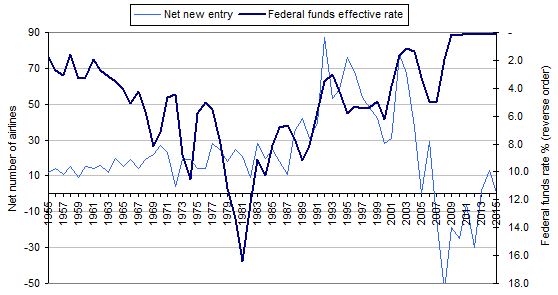 There are other barriers to entry; not insurmountable, especially with right business model

In addition to the availability of aircraft and finance, which is also linked to oil prices, potential new airlines face other hurdles. These include access to airport slots at the more popular (and congested) airports, the availability of flight crew and extensive regulation on safety and security. However, these are not insurmountable, particularly for a small start-up operation using smaller airports.

Market access restrictions would limit the new airline's geographic scope of operation, but not to the same extent as in decades past. Route areas such as intra-Europe, domestic US and the North Atlantic offer significant freedoms to airlines with the right nationality.

New factors are at work too. Access to a wide enough customer base may be a barrier, since those without an established loyalty scheme or alliances, and partnerships with other airlines, are at a disadvantage. Similarly, the lack of a well established route network is also a hindrance.

However, these are not so much barriers to entry, as barriers to longer term success. These are strategic choices inherent in the business model adopted, which is critical to a new entrant's chances of generating sustainable profitability.

Cheap money and a fairly plentiful supply of aircraft (although not always directly from the manufacturers) have been available ever since the global financial crisis, yet the number of new airlines entering the market has been declining since then. One of the riders to the availability of aircraft and finance is that they are not available to everyone. As a consequences of the global financial crisis, creditworthiness has become much more important.

Moreover, the complex series of factors affecting the balance between the supply and demand for aircraft mean that asset values have only started to decline more recently. The market has seen, and will continue to see in the next year or two, the entry of more new aircraft types than in any previous decade.

The orders for these new, more fuel efficient aircraft were placed when oil was consistently above USD100 per barrel. They were needed to replace older gas guzzlers. At USD30 or USD40, more of the older aircraft are likely to continue to operate for longer, putting some pressure on the values of the newer types, and across all aircraft types.

Aircraft and cheap finance may have been available for some time, but asset prices have not been so attractive to potential new entrants until they now are in prospect. Moreover, oil prices have only been on the slide for the past 18 months, and the impact of this on the supply of aircraft has also taken time to filter through to asset values.

Conditions appear to have been favourable for new airline entry for at least a year, but the number of new entrants has remained stubbornly low. Airlines have long been a risky investment and it may be that would-be new airline investors and executives have finally taken heed of the old adage, that the best way to become a millionaire is to start off as a billionaire and then invest in an airline.

Ironically, this caution among potential new airlines coincides with cyclically high levels of profitability in the industry. Perhaps low oil prices will now be the new ingredient that starts to make a difference to new entry numbers.