Optimism about the future for Iran’s aviation sector abounded at the CAPA Iran Aviation Summit 2016. With sanction barriers now coming down, Iran’s airlines, airports and tourism operators are finally able to look beyond mere survival and begin making plans for the future. Western airlines, leasing companies and financiers, as well as industry suppliers are also exhibiting strong interest in the market and its long term potential.

This positive outlook at the Summit was tinged with recognition that there are also significant deficiencies that Iran needs to address. The decades of economic and political isolation from the mainstream have left aviation in Iran well behind the rest of the world. A concerted effort across numerous fronts will be necessary before Iran achieves a modern aviation industry.

In discussions at the CAPA Iran Aviation Summit, participants suggested three main areas that represent potential brakes on Iran’s aviation development and growth: infrastructure, policy/regulation, and human resources. In addition, questions of financing - who will fund modernisation development and how it will be financed - remained a key topic of discussion at the summit.

A population of 80 million, well educated and with immense tourism potential

There can be little doubt that had Iran been a full participant in commercial markets for the past 40 years it would today be a massive force in global aviation. Geographically placed in a similarly strategic position to the Gulf carriers, but with a large potential domestic market to complement that opportunity, Iran could well have become a key aviation hub between east and west.

However, the world has moved on. Aside from those natural assets, Iran is poor in infrastructure, skills and without a recognised place in the system. As the Middle East around it has become more complex, with its innate stability, Iran has however become a preferred  - and necessary - routing for many major airline overflights on East-West routes, offering a hint of the potential, once a level of normality is achieved.

Meanwhile there are still some steps to be taken before the sanctions situation gains full clarity - and then the hard yards must begin.

An infrastructure revival is already under way

Infrastructure, particularly airport and ATM/CNS infrastructure, was considered at the Summit to be the most straightforward issue to deal with. However, it also has the longest development horizons and is the most demanding in terms of financing requirements.

Iran has 67 airports, but chronic under-investment during the sanctions period means that only 47 of them are operational. Most Iranian airports are small and short on capacity: less than 10 handle one million passengers p/a and few others handle more than 500,000 passengers p/a. 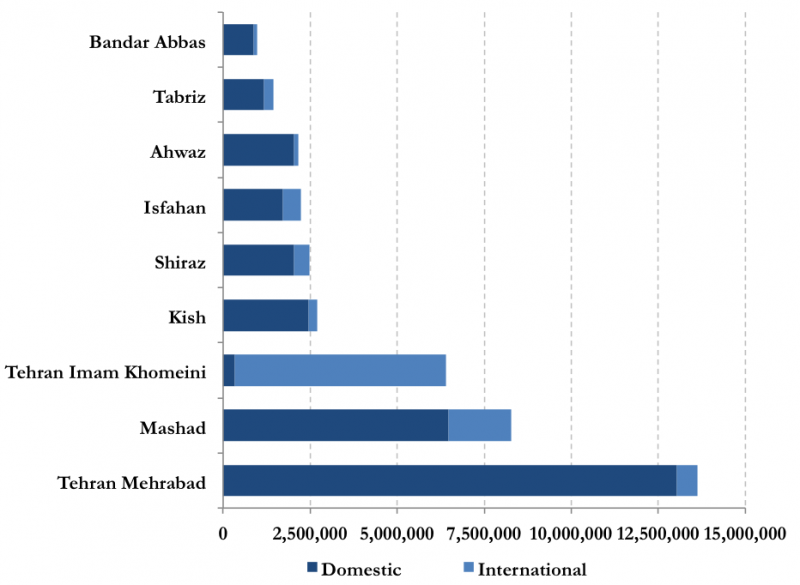 To overcome this level of shortfall, the Iranian government has announced plans to invest at least USD8 billion to construct additional facilities at 27 airports. Iran estimates its airport infrastructure could require USD20-30 billion in expenditure over the next 20 years.

There are also plans to develop seven new international airports, each capable of handling long haul widebodies, around Ahvaz, Bushehr,Tehran, Qom and Araz over the next decade. At least USD3 billion in investment opportunities are available for airport projects in 2016 alone.

Iran’s largest airport development project, the upgrade of Tehran Imam Khomeini International Airport (IKIA), gives an indication of the scale of the issue. In 2014 IKIA handled 6.5 million passengers, predominantly international, above its design capacity limit of 6 million. A new ‘Salam’ terminal, with capacity for 5 million passengers, is due to go into operation by the end of 2016. It is expected to handle the needs of the airport for the next three to four years, particularly providing relief during the busy pilgrimage and holiday travel periods.

Iran wants to do much more than just upgrade IKIA to keep pace with demand. A plan has been developed to turn the airport into a major international hub and an alternative to Istanbul and the Gulf hubs for East-West transit traffic. 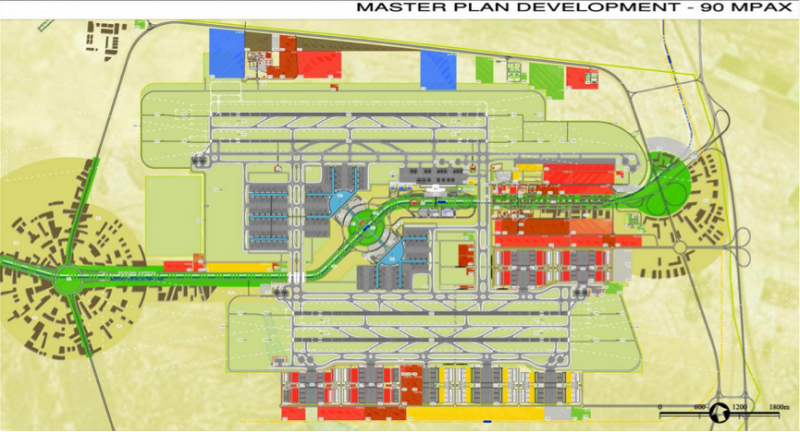 Iran recognises it has neither the expertise nor financial resources available to carry out this sort of development itself. Iran Airports Company (IAC) deputy CEO planning Dr. Hossein Bagherian, speaking at the CAPA Iran Aviation Summit, stated that the cost of developing airports makes it prohibitive for Iran to achieve its goals on its own.

The country is already turning to international partnerships to make its airport plans a reality. The IKIA development contract has been already awarded to a consortium between Aeroports de Paris (AdP) and Bouygues Batiment. IAC and VINCI Airports have signed concession deals for the expansion of Mashhad and Isfahan airports.

Regulatory change will be needed before such deals can be finalised. Existing regulation and laws are sufficient to select and define the companies that will tender and invest in Iranian airports, but changes are needed to allow for public-private partnerships involving foreign entities and to allow Iranian airports to introduce charges such as development fees to fund construction. Transparency and predictability will also be essential prerequisites for investors.

According to Dr Bagherian there are smaller regulatory changes, such as permitting airport development charges and allow airports access to certain types of government funding or alternative international financing arrangements, before development projects can proceed.

ATM is also a key area for investment, where urgent challenges need to be addressed. Iran controls a key piece of Middle East, managing 1.6 million sq km of airspace with nine FIRs abutting the Tehran FIR. As a result of conflicts in Ukraine, the Middle East and North Africa, overflights through Iranian airspace have increased in recent months from around 550 to 1300 per month, mostly East-West long haul traffic.

This traffic spike, plus the potential rapid growth in traffic from local and international airlines, will require a major expansion of capabilities. Iran has committed USD250 million to upgrade its ATM system.

Harmonising its ATM/CNS services with ICAO regulations and practices by 2019 is a priority, according to Iran Civil Aviation Organisation (CAO) GD ANS and aerodrome oversight, Hossein Attari. ATM coordination with regional states is also an issue, as there is currently limited information sharing with neighbouring states' airspace, making aircraft handovers difficult.

Military-civil coordination within Iran also needs to be addressed. 50% of Iranian airspace is under military control, with more than 250 prohibited areas of airspace - although this situation is reportedly easing.

Education and skills training are essential features of a mature system

At the CAPA Summit, IAC deputy CEO of aeronautical services Saeed Akbari commented that while sanctions made Iran mostly self-sufficient in ATM training and knowledge, the country will require operational training as it introduces new technology for its ATM/CNS infrastructure. Iran plans to send students to train in developed countries and then transfer their knowledge back to the country.

The manpower and knowledge shortfalls in ATM are a microcosm of Iran’s larger human resources issue essential to its aviation growth. Iran has a number of highly professional aviation training organisations, but its schools are focussed on use and maintenance of systems that are often a generation (or more) behind the rest of the world.

Iranian Civil Aviation Organization (CAO) president Ali Abedzadeh noted at the Summit that enhancement of training standards and expanded training capabilities that will promote new and market-relevant technical skills, will be a key for the aviation sector as a whole.

Mr Abedzadeh also expressed Iran’s willingness to cooperate with foreign partners in the field, through partnerships, JVs or direct investment. The Iranian CAO also sees an opportunity eventually to build up its aviation training industry to the point where it can meet growing demand in other regions for more trained professionals.

Behind the issues of regulation, training and infrastructure are the questions of who is going to pay for Iran’s aviation revitalisation and how it will be financed. While economic growth in Iran is forecast to double in 2016 and then quickly double again, Iran has recognised that it will not be able to finance development by itself.

Iranian Civil Commission of Parliament chairman Dr Mamedi Hashemi stressed at the CAPA Summit that managing the cost of modernisation is as important for Iran as ensuring safety and quality and facilitating immediate development. Iran will need to source investment internationally, through public-private partnerships and direct foreign investment, to fund its plans.

Potential obstacles to this are lingering US sanctions, still creating uncertainty for would-be investors. Some US sanctions on public and private Iranian organisations remain, US nationals and companies are still mostly prevented from dealing with Iran and US dollar-denominated transactions still cannot go through the US banking system.

This creates issues in the short term that will require creativity to resolve.  For instance, the majority of aircraft financing deals are carried out in US dollars and there are lingering concerns from leasing companies, as well as the international banks and financing firms that support them, about the stability of the Iranian market. European and Asian financiers have already started doing deals in Iran and as more US financial sanctions are removed, Iran will regain access to the full international financial system.

At the Summit, DVB Bank managing board member Bertrand Grabowski suggested that it will be more than 18 months before Western banks are financing aircraft directly to Iranian airlines, warning of the need to be “much more clarity” on what the US is willing to authorise.

But as the recent escalation in use of its airspace illustrates, to embrace Iran in the global aviation system has many important elements which go far beyond benefitting Iran. In a worldwide and highly integrated network of air services, Iran is too important a country to remain absent from full participation.