Bulgaria Air is strengthening its European network with the introduction of Embraer E-Jets to its fleet. Expanding its regional fleet will allow the airline to increase frequencies across its network and better match supply with demand through the use of smaller aircraft than previously.

As LCCs make inroads into its home market, the higher cost legacy carrier must look to consolidate a higher yielding market segment using frequency, but this is a complement to, not an alternative to cost reduction.

As the national carrier of Bulgaria, Bulgaria Air is based at Sofia Airport and operates scheduled services, ad hoc charter services and business jet transportation. Meanwhile Wizz Air is making its presence felt.

The summer 2012 schedule will see the carrier increase its capacity to almost 40,000 seats per week before declining significantly in winter 2012 to just over 25,000 seats per week. The large majority of Bulgaria Air’s operations are international, across Western and Eastern Europe and the Middle East, with a small domestic network consisting of two domestic services, Sofia-Varna and Sofia-Burgas. 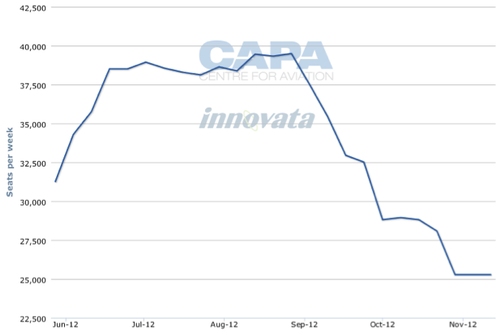 Bulgaria Air has minimal expansion plans by way of new routes, with only Sofia-Prague, Sofia-Palma de Mallorca and Sofia-Beirut launched on the summer 2012 schedule. Sofia-Prague service was announced after it was revealed CSA Czech Airlines planned to cancel operations on the route.

Instead of mainly launching new services, Bulgaria Air is focusing upon consolidating and strengthening its existing network through increasing frequency on its current routes. The Embraer E190s will be placed on existing routes previously operated with larger A319 and A320 equipment.

Bulgaria Air took delivery of its first E190 aircraft on 09-Mar-2012 and its second on 14-Apr-2012. The aircraft are configured in a two-class layout with 108 seats. The airline is reportedly planning to receive its third E190 in 3Q2012 and plans to operate nine by the end of 2016. The initial aircraft were to be placed on services from Sofia to Brussels, Paris Charles de Gaulle, Amsterdam and Moscow Sheremetyevo which previously were operated using a mix of A319 and A320 equipment.

A small but varied fleet has pluses and minuses

The airline’s only orders are for five additional E190s.

Versatility of size permits better targeting of frequency on key routes, but inevitably increases unit costs. Hence, for example, the ageing BAe 146 aircraft, with similar capacity to the E190s, will presumably be phased out over the next couple of years, as Bulgaria Air takes delivery of more of the E-jets. 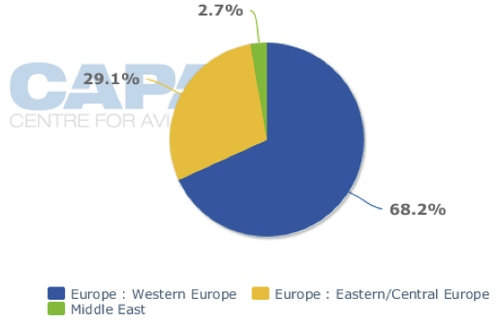 Bulgaria Air’s main market is Western Europe where over two thirds of its capacity is allocated; its top 10 international routes are all to Western European destinations. 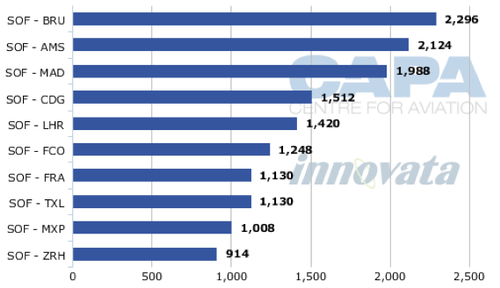 Bulgaria Air is the leading carrier in Bulgaria with just over a quarter of the system capacity (25.4%) however, Hungarian low-cost carrier Wizz Air is stepping up as the second largest carrier in the country (16.1%). Until 2011, Wizz Air’s Bulgarian unit, Wizz Air Bulgaria, operated from Sofia Airport, however, due to operational reasons it merged its operations with Wizz Air.

Wizz Air is now the main contributor to Bulgaria’s international low-cost penetration rate of 29.9%. Domestically there is no low-cost operation. 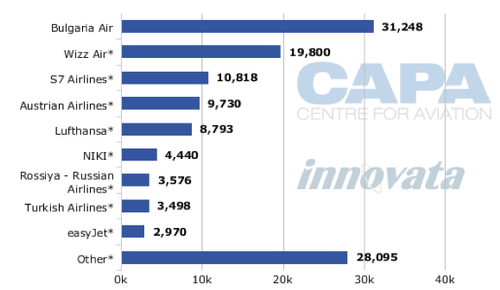 Bulgaria Air and Wizz Air currently compete on seven routes, though only two directly, as Wizz Air primarily operates to secondary airports. All seven feature on Bulgaria Air’s top 10 services based upon capacity it offers per week on the routes.

As low-cost operations permeate Bulgaria Air’s key markets, the carrier’s strategy of strengthening its existing network through adjusting capacity and frequencies, rather than going for route and market growth would seem sensible. The introduction of new fuel efficient, smaller jet aircraft which are able to operate some of the airline’s thinner routes. Higher frequencies, on suitable routes, are key to maintaining network economics and generating higher yielding business and, where Bulgarian’s costs are inevitably considerably higher than competitors like Wizz, these must be priorities.

The new aircraft will also make it easier to adjust capacity over winter while still maintaining frequency, an option that is more limited when having to rely on the larger A320 family aircraft Bulgaria Air currently operates.

This at least is the theory. If it is intended as a substitute for cost reduction across the whole airline then it is unlikely to help Bulgarian maintain its position in its home market. The recent history for smaller flag carriers in Europe, when confronted by the low-cost strength of the genuinely efficient point-to-point operators is not a positive one.

The frequency strategy can not stand on one leg alone. Restructuring and continuing cost reduction will be essential to maintaining stability.