North and South American airline stocks rose for another day on Thursday (03-Sep-2010), after markets continued to gain and TAM received approval from the Brazilian Finance Ministry to merge with LAN Airlines. The Dow (+0.5%) was up on better-than-expected jobs and housing data released in afternoon trading.

Latin American markets slipped, as investors awaited the new US data. Chile’s IPSA (+0.3%) closed at a record high, while Brazil’s Bovespa (-0.4%) fell as investors cashed in on profits made the day before.

TAM (+4.8%) made its biggest climb in more than two weeks, while LAN Airlines (+2.3%) also rose, after Brazil’s Finance Minister Guido Mantega announced the proposed purchase of TAM by Chile’s LAN Airlines satisfies foreign ownership rules. Mr Mantega stated he expects the deal to be “good”, as both LAN and TAM are “powerful and strong”.

The deal is yet to be approved by Brazil’s civil aviation authority and antitrust regulator, while Chile’s FNE Competition Agency has confirmed plans to study the affect the proposed merger would have on routes linking Santiago with Asuncion, Sao Paulo and Rio de Janeiro.

Brazilian law requires foreign investment in airlines to be restricted to no more than 20%. As a result, TAM’s controlling shareholders will retain 80% in TAM’s voting stock, while LAN shareholders will own about 70% of the combined airline. TAM investors are to receive 0.9 LAN shares for each TAM share held.

LAN agreed to purchase TAM on 13-Aug-2010 in an all-stock deal worth USD3.8 billion, under which LAN will hold about 70% of the new carrier, LATAM Airlines Group.

Copa Airlines (+2.4%) also rose strongly on the back of the TAM news.

News also broke this week that the St Maarten Tourism Bureau is "99.9%" certain that Copa Airlines will start servicing the island from Panama in Dec-2010, with twice weekly frequency utilising E90 equipment. An announcement is expected shortly.

In other Latin American news, Mexico' Government is hopeful Mexicana will resolve its financial troubles in time for the Dec-2010 travel season, according to Labour Minister Javier Lozano. He stated the carrier will likely be a much trimmer company if it survives, with a smaller fleet and fewer routes, "but also with management that's professional, serious, responsible, with capital, with bargaining agreements that make the business viable". 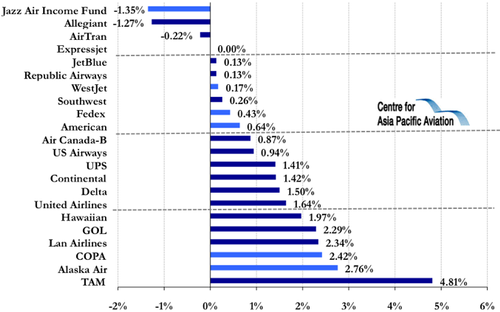