Boeing India President, Dinesh Keskar, commented: “There is strength and resilience in the Indian commercial aviation sector over the long term. The potential for future growth of air travel, both domestically and internationally, is among the greatest in the world and Boeing will continue its efforts to be India’s preferred partner and aerospace provider.”

Mr Keskar added that air travel in India, tied closely to the country’s economic growth, is expected to largely recover by 2011, adding that the operating environment for India’s carriers shows a positive turn, with passenger numbers, load factors and yields showing an upward trend on domestic and international services.

Mr Keskar continued: “We went through the deepest recession in the history of aviation but now India’s recovery is one of the fastest”, adding: “If you take a broad look at the India market, what resonates is more positive than negative and the prospect for continued long-term growth remains high.” 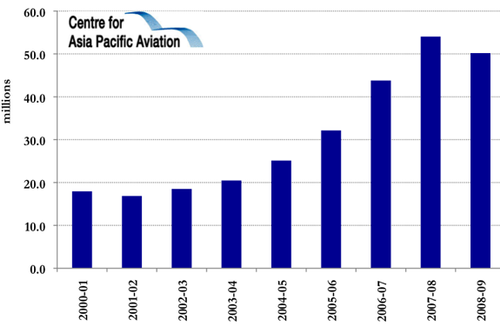 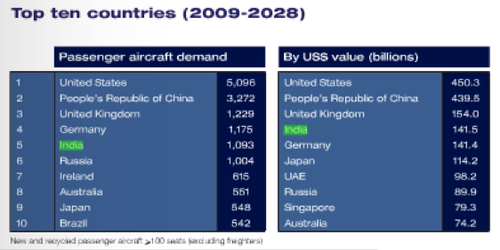 Airbus commented that Indian freight traffic is expected to grow almost four fold over the next 20 years, with Airbus forecasting that 164 cargo aircraft will operate within and from India by 2028. The current fleet is limited to only 12 aircraft.

Airbus had previously stated India would require 992 aircraft between 2008 and 2027, valued at USD105 billion (both estimates based on orders for passenger and freight aircraft).

Airbus also anticipates that India domestic travel will be the fastest growing market for air travel over the next two decades, with domestic traffic increasing by an average 12.2% annually, to be seven times the 2008 traffic level. Overall traffic growth will be among the world's highest, averaging 7.3% over the next 20 years compared with the currently global average of 4.7%, according to Airbus, which added that “long term, the potential for growth in India’s aviation sector remains exceptional”. 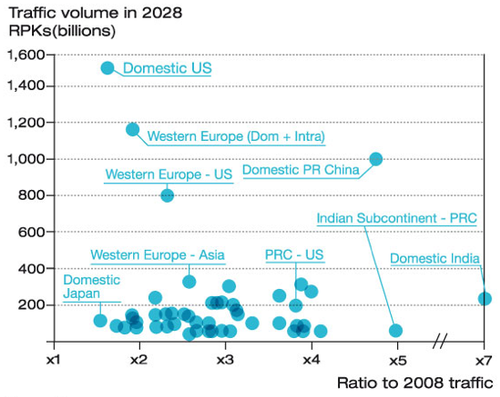 Travel propensity remains low in India, as the following graphics from both Airbus and Bombardier highlight. This indicates the large potential for increased travel demand in the country. 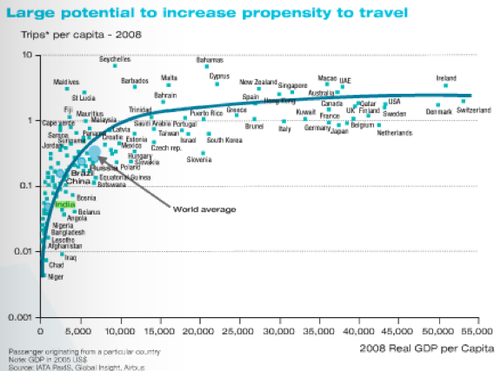 Propensity to travel by region: Bombardier 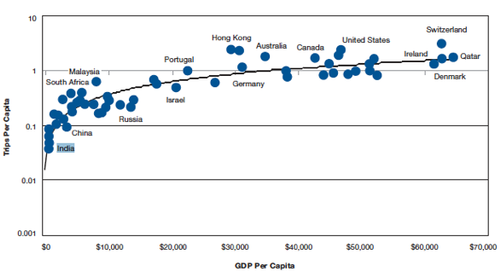 Bombardier expecting 5% of deliveries to go to India

Meanwhile, Bombardier in its 20-year outlook, released in Jul-2010, stated it expects, in the next 20 years, that there will be a geographic shift in delivery demand, with China and India to be the two growth regions.

Specially, India, from a small base today, is expected to take 5% of the deliveries and will grow to 4% of the 20- to 149-seat fleet, up from 1% today. This will result in growth from 120 to 650 of these aircraft type by 2029, according to Bombardier. Overall, India is predicted to take 600 deliveries, representing 36% of the total deliveries within the Asia/Pacific region.

Bombardier added that India is a key driver of economic growth in the Asia/Pacific regional with a GDP growth rate of 6.3% expected over the next 20 years. 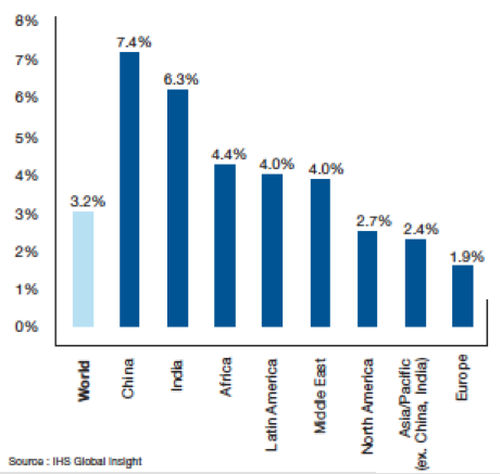 Source: Bombardier based on HIS Global Insight

According to Ascend, India’s passenger airlines currently have an in-service fleet of 372 aircraft, with orders for 294 aircraft.

India’s current and future fleet: as at Aug-2010

Such is the optimism at SpiceJet, the carrier’s Board this month approved a new order for 30 B737-800 aircraft, with deliveries to commence in 2014 for a period of four years. The carrier did not specify how the purchase would be funded. The existing fleet of aircraft are all leased. The carrier plans to add 15 aircraft over the next two years.

SpiceJet currently has a fleet of 21 B737-800/900s with seven more deliveries scheduled up to 2012 (one more in 2010, and two each in 2011 through 2013 according to Ascend). SpiceJet added that it is evaluating "a far more aggressive fleet expansion" over the next 18 to 24 months than originally planned, with acting CEO and Director, Kishore Gupta, adding: “The current pending orders with Boeing, the more aggressive short-to-medium term fleet expansion and this fresh order for 30 aircraft will ensure that Spice not only continues to be ahead of industry growth, but also consistently offers value-for-money fares to its customers”.

The carrier has previously commented: “With Maran coming in, we have the money now; earlier, with Wilbur Ross, the aim was to consolidate and break even. The company was earlier planning to bring in four aircraft, but we will add three more to the tally. For the next financial year, we will require about eight more”.

Mr Gupta, commented: "We are currently seeing a strong resurgence in domestic air traffic growth on the back of robust macro-economic growth. We expect domestic demand to grow at 16% during the current year and to sustain a 12-14% annual growth going forward in the medium term. The growth will necessitate significant capacity induction and the fresh order announced by us today will ensure that SpiceJet will remain at the forefront of the growth story in the Indian skies”. The carrier’s revenues, meanwhile, are expected to increase in the 15-20% range in FY2011.

India’s independent LCCs - IndiGo, SpiceJet and GoAir - are set to nearly double their fleet capacity over the next 17 months from 56 to 104 aircraft. Currently, Indian air carriers offer 115,000 domestic seats per day, of which LCCs (including the economy units of Jet Airways and Kingfisher) comprise approximately 70% of the total.

After the dramatic changes of the last five years, the Indian aviation industry is now seeing the emergence of a more favourable environment, supported by an economic recovery, which has boosted demand levels in the domestic market.  Looking forward, there is large scope for continued and rapid growth, with a large and increasing population, coupled with a low propensity to travel, improved infrastructure in the country and increased international connectivity as foreign airlines seek greater access to the world’s second most populous nation.

Accordingly, Civil Aviation Minister, Praful Patel, stated he expects India will be “in the top five civil aviation markets all across the world” within the next five years, up from ninth largest currently, adding: “That, I think, is a great achievement in the remarkably short period of time.”