A fire onboard a B787 test aircraft has forced Boeing to temporarily suspend test flights while it determines the cause of the problem. Boeing confirmed it does not know how long the suspension will remain in place and has not determined the impact on the aircraft’s delivery schedule. Boeing is still working through a slew of issues with the B787, including Rolls-Royce engine availability, workmanship challenges at Alenia Aeronautica and supply chain problems related to aircraft interiors. Boeing shares fell 3.2% yesterday, while shares in rival EADS rose 2.9%.

Rolls-Royce shares also took a hit when Lufthansa announced it would replace one of the Trent 900 engines fitted to its A380s. The airline joins Qantas and Singapore Airlines, which have both discovered oil leaks in the engines. Qantas suffered an explosion on one of the Trent 900 engines shortly after take-off from Singapore last week. Rolls-Royce and EADS have released enhanced inspection procedures for the engines, which are intended to return the aircraft to service. Rolls-Royce shares fell 3.1% in trading.

BAE Systems shares rose 3.1% yesterday. The company’s CEO stated that it has no interest in merging with any of its US counterparts but is still looking to acquire companies in fragmented high-technology and defence markets. Despite defence budget cuts in the US and UK, BAE Systems is bullish on the prospect of growing its defence sales.

Shares in CAE were also up strongly, gaining 3%. The Canadian manufacturer of simulator products reported a net profit of CAD40 million for its second quarter (essentially flat year-on-year), with sales improving 6% year-on-year. Civil aerospace revenue rose 8%, with the company projecting the sale of more than 20 full flight simulators this year. 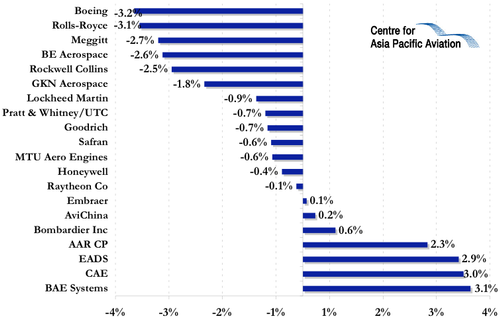 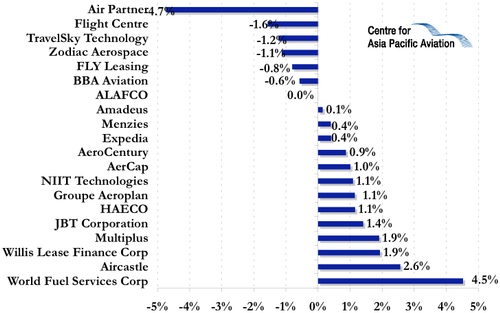