Avianca Brazil is slowing its domestic growth after seven years of consistent double-digit capacity expansion. The airline has always been almost entirely a domestic operator but is starting to focus more on the international market.

In 2017 Avianca Brazil is also expanding its domestic network with three new destinations, which are being launched at the request of Star Alliance partners. However, it is pursuing a much slower rate of domestic capacity expansion than in the past several years as political uncertainty in Brazil impacts local demand.

This is Part 1 of an analysis report on Avianca Brazil. This article will examine Avianca Brazil's decision to slow its domestic capacity expansion in 2017 while at the same time still pursuing domestic network expansion to improve connectivity with Star Alliance partners.

In Part 2 CAPA will examine Avianca Brazil's new strategy for the international market, as well as its fleet strategy.

The airline commenced operations in 2002 as Oceanair. It was a small player in Brazil’s domestic market until 2010, when Oceanair adopted the Avianca brand and began pursuing faster expansion.

Avianca Brazil’s RPKs have increased sevenfold since 2009, when its fleet consisted of only 14 Fokker 100s. Annual RPK growth has exceeded 14% every year since 2010, consistently outpacing the average growth rate in Brazil.

Avianca Brazil recorded RPK growth of 14% to 15% in the past two years, despite challenging economic conditions. The overall Brazilian market contracted in 2016.

Avianca Brazil CEO Jose Efromovich told CAPA on the sidelines of the Jun-2017 IATA AGM that in 2016 the airline had decided to continue expanding at a double-digit rate despite the challenging economic conditions, which prompted its three main competitors to cut capacity, since it saw an opportunity to improve the density of its domestic network.

Avianca Brazil did not launch any new destinations in 2016. However, it added capacity on several existing routes, resulting in a better product for its own passengers, as well as passengers connecting from international flights operated by Star Alliance partners. Avianca Brazil joined Star in Jul-2015 and has since implemented codeshares with five Star members outside the Avianca family, including United Airlines.

Mr Efromovich said that passengers had responded favourably to the flights added by Avianca Brazil in 2016. “Even with the growth we still maintained the highest load factor in the market”, he said. Mr Efromovich also pointed out that Avianca Brazil was profitable in 2016 – on an EBIT level – while most other airlines in Brazil were in the red.

Avianca Brazil flew 9.211 million passengers in 2016 and had an average load factor of 83.8%, according to Brazil ANAC data. All but 8,000 of these passengers were in the domestic market as Avianca Brazil operated only one international route in 2016 – a weekly service from Fortaleza to Bogotá.

Avianca Brazil’s share of domestic RPKs grew by 2.1pts, from 9.4% in 2015 to 11.5% in 2016. Avianca Brazil’s share of domestic RPKs has steadily increased since 2009, when it only captured a 2.5% share of the market. (Market share data based on passenger numbers is not available prior to 2015 as Brazil’s ANAC only began reporting passenger numbers in 2015; previously it had only reported RPKs and ASKs.)

Avianca Brazil’s share of domestic RPKs reached 12.6% in the first four months of 2017, representing growth of another 1.5ppts compared to the same period of 2016.

Over the past seven years Avianca Brazil has consistently pursued faster growth than its larger domestic competitors; this has been for strategic reasons as its owner, the Synergy Group, was eager to grow the airline’s market share. Synergy acquired Oceanair in 2004 and less than a year later acquired Colombia’s Avianca.

Avianca Holdings is publicly traded with listings in Bogotá and New York, while Avianca Brazil is still a privately owned airline with Synergy holding all the shares. The Synergy Group is also now working on launching a new regional airline in Argentina, which will be branded Avianca, but at least for the initial few years will be operated as a separate company similarly to the structure that has been used by Avianca Brazil.

CAPA examined the objective of Avianca Argentina as well as Avianca Holdings' plans for expanding in Argentina's international market – with up to six new routes to Argentina from Bogotá and Lima – in a separate 30-Jun-2017 analysis report on Avianca Holdings.

Although domestic growth was again in the double digits in 1Q2017, Avianca Brazil has started pursuing a slower rate of domestic expansion over the past couple of months.

In Apr-2017, the last month of available ANAC data, Avianca Brazil’s domestic ASKs were up 8.8%. This represented the first time in seven years (since Apr-2010) that Avianca Brazil did not achieve double-digit monthly domestic capacity growth.

Mr Efromovich told CAPA that Avianca Brazil has decided to slow its domestic capacity expansion until there is more certainty in Brazil’s political environment. “The market doesn’t react well when there are question marks on the political side”, Mr Efromovich said. “So definitely we are not going to grow in the rates that we were growing in the last years.”

He added that domestic passenger and capacity growth for the full year in 2017 “will be much less than last year”.

Former Brazilian president Dilma Rousseff was impeached in Aug-2016, and now her replacement, interim president Michel Temer, is also facing corruption charges. An election to select a permanent new president is slated for 2018. Congress and Senate seats are also up for re-election.

“We are facing some situations that we need definitions. We need political definitions in the country. We need to understand what will happen”, Mr Efromovich said. “This is something that will happen in the next couple of months; we are talking about Congress, Senate and the president itself. That will address what will happen with the economy.”

In a separate interview with CAPA prior to the IATA AGM, Mr Efromovich said domestic demand in Brazil remains weak. The Brazilian economy has shrunk for 12 consecutive quarters, although the rate of GDP contraction reduced in 1Q2017, to 0.4%, compared to 2.5% in 4Q2016 and 3.2% for the full year in 2016.

“We are not out of the storm yet. Although we have seen a small improvement against 2016, demand is still very week particularly in the Business Travelers segment, which represent the largest share of our business”, Mr Efromovich said.

“We do not see 2017 as the year of the recovery, but as the year in which the economy has stopped degrading. We are a little bit more optimistic about 2018.”

While Avianca Brazil has put the brakes on overall domestic capacity expansion, it has decided to resume expansion of its domestic network. This represents a shift in its domestic strategy, since over the past few years the airline has not pursued significant network expansion but has focused on adding capacity on existing routes, which has driven the overall double-digit growth rate in domestic capacity. As outlined earlier in this report, Avianca Brazil did not launch any new domestic destinations in 2016.

Avianca Brazil is adding three domestic destinations in 2017, extending its domestic network to 25 destinations. Two of these destinations had already been launched – Foz do Iguaçu and Navegantes – and Belo Horizonte is slated to be launched on 21-Aug-2017.

All three are relatively popular destinations for international passengers and were requested by Avianca Brazil’s partners in the Star Alliance. Avianca Brazil is serving all three destinations from São Paulo Guarulhos, the main gateway for foreign airlines serving Brazil, with multiple daily frequencies.

Rio de Janeiro Galeão is the second main international airport in Brazil and is served by almost as many Star airlines as São Paulo Guarulhos.

Guarulhos (GRU) is Avianca Brazil’s largest base while Galeão (GIG) is its third largest, behind the capital Brasilia (BSB). Avianca Brazil has 18 domestic routes from Guarulhos and 10 from Galeão (based on OAG schedule data for the week commencing 26-Jun-2017). 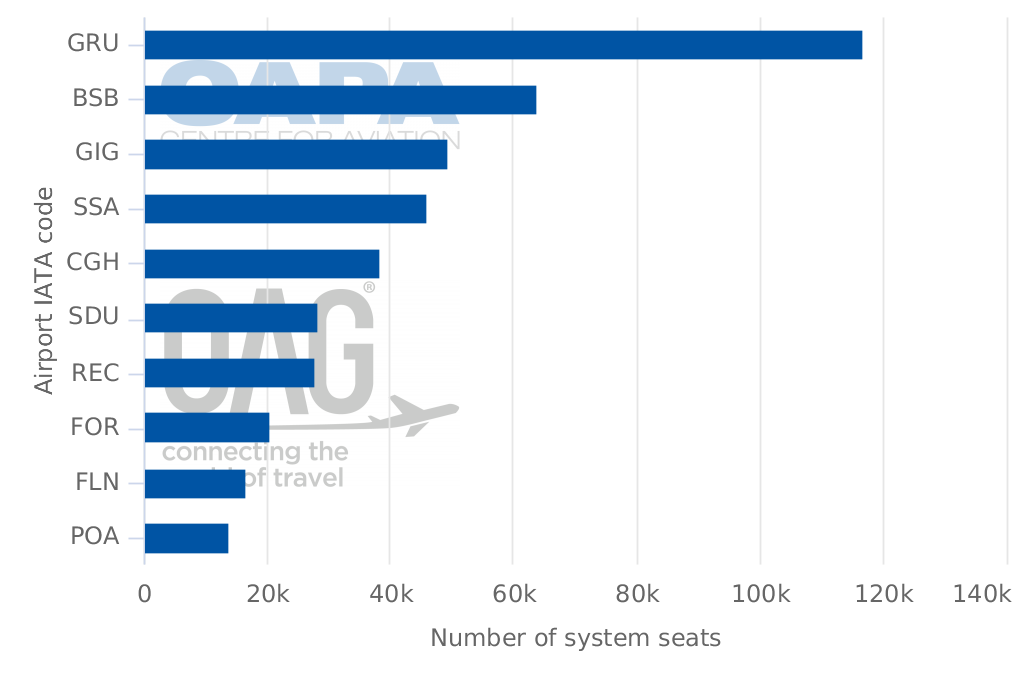 Several of Avianca Brazil’s routes from Guarulhos and Galeão have been augmented with additional frequencies over the past two years as part of Avianca Brazil’s domestic expansion. The denser domestic operation has resulted in improved connectivity with Star Alliance partners.

Mr Efromovich told CAPA that a very small proportion of Avianca Brazil’s traffic now connects with international flights operated by other Star members. However, this segment of traffic is growing, and the expansion of the domestic network being pursued in 2017 means Avianca Brazil “will be in a position to support much better our Star Alliance partners that arrive in São Paulo and Rio de Janeiro”.

CAPA will examine Avianca Brazil's new strategy for the international market, including how it will improve connectivity with Star Alliance partners, in Part 2 of this report. CAPA will also look at Avianca Brazil's fleet strategy, including the introduction of a business class cabin.