Virgin Blue’s shock profit warning last Friday has been attributed to many things: a slowing economy, a weakening retail environment as interest rates rise, excessive price competition, too much industry capacity and so on. Virgin Blue maintains that there has been a "rapid deterioration" in the operating environment in the short three weeks since the company's previous guidance. This is remarkable. In other words, the deterioration is sufficient to reduce two month (May/Jun-2010) income by AUD40-60 million. But fundamentally, Virgin Blue’s aspirational New World Carrier strategy is clearly failing to wrest business travel away from the Qantas Group, leaving Virgin Blue at the bloody low-end of the market.

But, as Virgin Blue slashed its guidance by more than half, citing a “radical decline in yields” from Apr-2010, Qantas maintained its earnings guidance for an underlying profit before tax of AUD300-400 million for the 12 months ending 30-Jun-2010.

The business market may be improving, albeit hesitantly, but Virgin Blue is missing out.

Qantas’ own monthly traffic data shows a steep fall off in domestic yields in Apr-2010, with yields falling 2.9% in that month. The fall was on top of a 6.1% reduction in Apr-2009, meaning domestic yields are some 10% below pre-crisis levels. Virgin Blue stated it expects average fares to decrease by over 10% going forward, which will severely pressure any earnings recovery. 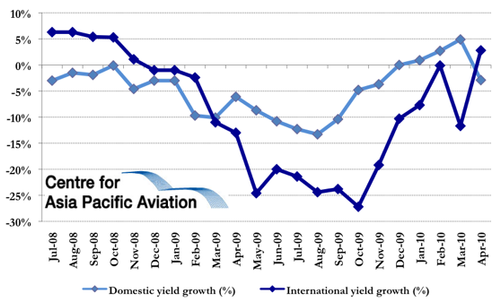 First of all, the carrier has apparently experienced a dramatic downturn in travel trends in the space of literally a few days. This has been accompanied by the introduction of new capacity onto the carrier’s routes.

The impact is apparently being felt both domestically (where Tiger Airways has been attacking the downside) and internationally (the airline’s Thailand results will presumably have been damaged by the unrest there over recent weeks, among other things).

The latest profit warning attributed the damage “particularly in respect of the leisure segment both domestically and internationally”, saying this was “consistent with the weakening trend seen recently in the broader retail market as well as an unexpected and sudden decline in consumer confidence in the last month. The decline in demand has coincided with a period of increased industry capacity.”

The contrast with Qantas’ more confident outlook is down almost entirely to the larger carrier’s ability to target both ends of the travel market, using its lower (than Virgin Blue) cost Jetstar in the leisure sector and the Qantas brand to soak up the great majority of domestic and international corporate and business travel.

And it is this latter market in which most carriers have been reporting renewed life.

Virgin Blue has been steadily improving its access to the premium travel market, but it still has a long way to go. Alliances with Delta and Air New Zealand are steps in this direction and newly-arrived CEO, John Borghetti, is regarded as a specialist in inter-airline relationships.

Mr Borghetti will be working hard to expand those opportunities. But for the time being, the bulk of the carrier’s livelihood is in the combined Australian and New Zealand markets. Here it is under attack from airlines with lower costs, which are fighting hard for market dominance. Tiger Airways especially, in the Australian domestic market, is wreaking havoc with yields – part of the reason why Virgin Blue sees the already historically low domestic levels falling by a further, remarkable, 10%.

Outlook: A race against time, to hoist yields

With this outlook, it is hard to see any imminent improvement in Virgin Blue’s predicament. In the longer term, certainly, the airline should be able to leverage all the hard work it has done over recent years to upgrade its product and to intrude into the corporate market where Qantas has held a near-monopoly.

But the carrier is necessarily going to experience a severe set of headwinds over coming months. It is still pulling costs out of its operation, but the simple fact is that the margin between its cost and revenue profile is not going to deliver any comfort for some months to come.

So, while relying predominantly on leisure traffic for its business, Virgin Blue does not have the cost base to allow it to compete equally with its peers. This is not a good place to be if the sharp downturn observed in the past month is an accurate indicator of future trends.

Strategy for the next year therefore appears likely to be a holding operation (and continued contraction) at the low end of the market, while going all out to get the necessary yield improvements in place.

If the downturn is as steep and irreversible as it now appears, the time to achieve this compensatory input may be limited.