American Airlines pulls many levers to improve PRASM, but cautions there is no overnight solution

Airlines adopting low cost and ultra-low cost business models have triggered numerous industry transformations, but one of the most important effects of their proliferation is a fundamental change in industry pricing. Traditional yield management techniques have been upended, and full service airlines are working to adapt to new pricing methodologies.

American Airlines is in the process of overhauling its revenue management system, as well as creating crucial product distinctions as a base for revenue growth in the future. Product segmentation has become a buzzword in the US industry, as the three large global network airlines develop products to target a customer base that ranges from the infrequent traveller to high-yielding corporate customers.

The revenue management and product changes that American is putting into place will take some time to generate favourable results. In the short term, the airline is joining its large global competitors in acknowledging investor concern about the industry’s negative passenger unit performance, and stressing that it is working diligently to return to positive PRASM.

LCCs and ULCCs are driving 'intelligent evolution' in the US industry

During the past year there has been much discussion about the effects of the ULCC business model adopted by Spirit and Frontier on the US market place. The notion that the country’s largest airlines – American, Delta, Southwest and United – are ignoring the cost-conscious passenger segment targeted by ULCCs has essentially been dispelled.

American has been the most vocal about the ULCC effect in the US market. In 2015 the company president, Scott Kirby, explained that 87% of the airline’s passengers during the past year had been travelling on the airline for the first time, and that the first time passenger pool represents 50% of American's revenue.

Furthermore, Mr Kirby observed that 85% of pricing in the US domestic market is influenced by low cost or ultra-low cost airlines.

The result is a significant push by American, Delta and United to create segmented products to compete more effectively with ULCCs, and more importantly to grow revenue by selling different products that cater to various passenger segments – rather than selling a commoditised product offering. Delta was the first of the three majors to test a bare-bones product back in 2012, and its efforts evolved into the Basic Economy component of its fare families.

Delta’s 'Branded Fares' – Main Cabin, Basic Economy, Comfort Plus and Delta One/First Class – are on track to generate USD2.4 billion annually by 2018, compared with USD1.2 billion in Branded Fare revenue for 2015. Previously Delta had estimated that its Branded Fares would generate USD1.5 billion by 2018.

American is still undergoing merger integration with US Airways, but the company plans to create a basic economy product set for its debut by YE2016; the premium economy product should follow in 2017. Mr Kirby recently credited ULCC growth for product segmentation, noting that “competitive forces drive intelligent evolution”.

Mr Kirby believes that product segmentation should be transformative, and has stated that he would be disappointed if the revenue benefit for an airline the size of American from branded fares did not reach USD1 billion.

Another benefit that product segmentation creates is an ability to modernise and rationalise fare fences. Previously, Mr Kirby has observed that one of the greatest changes in the US domestic pricing structure has been the elimination of restrictive, outdated, pricing fences – largely due to the proliferation of low cost/ultra-low cost airlines and their new pricing structures.

Historically, there have been fare features – such as a 14-day advance purchase and a minimum Saturday night stay requirement – which were one (predominant) way that the airlines attempted to segment demand and offer business travellers a favourable product, but at a price.

However, now those price fences have become less and less marketable (or competitive) and the strategy now is to drive higher fares through pricing structures such as fare families.

American is overhauling its revenue management system, which was developed in the 1980s with Band-Aids applied throughout the years, Mr Kirby has said. The changes include better forecasting and gathering improved information about competitor moves than was historically available.

American claims many levers it can pull to shore up PRASM, but it will not happen overnight

American has been aggressively buying back shares since the close of the merger with US Airways in late 2013. In 2015 alone the airline posted share buybacks of USD3.6 billion. Part of the logic for the repurchase was management’s view that American’s stock was undervalued.

Its high during the last year has been up to USD46, and in early Jun-2016 American’s stock price had fallen to USD31.67. 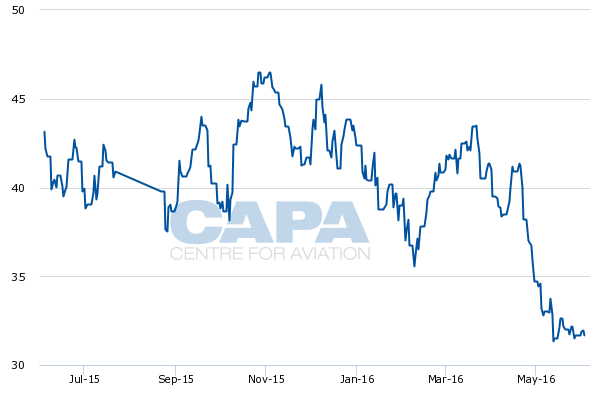 American’s passenger unit revenues fell 7.5% in 1Q2016 and it is projecting a 6% to 8% decline for 2Q2016. The airline has had higher exposure to weaknesses in Brazil and Venezuela, as well as the collapse of pricing in the Dallas market.

Mr Kirby remarked that he understands the concern about PRASM, and realises that some investors will be justifiably sceptical until unit revenues turn positive.

Underlying demand remains strong, said Mr Kirby; but pricing continues to remain weak. American has several initiatives under way beside capacity reductions to improve passenger and total unit revenues (RASM). Its branded credit card agreement expires in 2017 and the airline hopes to reach a new agreement similar to those of its competitors (which have driven up to three points of positive unit revenue for those airlines), said Mr Kirby.

During mid-2015 Southwest forged a new branded credit card agreement, which has helped to lift total unit revenues since that time. The 0.1% increase in 1Q2016 included a USD110 million benefit from the agreement. For 2Q2016, Southwest is forecasting a “modest” increase in unit revenues, which includes a USD125 million benefit from the credit card agreement.

American is also debuting a new revenue-based frequent flyer programme in 2017, which should also help it boost unit revenues. The benefits from the revenue management system overhaul and the introduction of branded fares will take longer to materialise.

Mr Kirby stressed that American understands the importance of returning to positive passenger unit revenue growth, which he stated is core to the airline’s success. He also stressed the many levers that American can pull to bolster its unit revenues, but those efforts “do not change things overnight”.

American's message of PRASM patience is rational, but may not sit well with investors

American joins the majority of its US competitors in building a business for the long term in an environment where some investors remain worried about continuing weak PRASM – despite strong top line profits – and in a competitive landscape where shareholder returns are now a mainstay.

The company’s advice that there is no overnight silver bullet to lift passenger unit revenues may not reassure investors but American certainly deserves credit for its candour, and seems to be undertaking logical steps to adjust to changes in the US airline industry while it works its way through a complex merger integration.