Recent justifications by American Airlines for the matching of low cost and ultra low cost airline fares in its markets challenge one pillar of Spirit Airlines’ business model – that large network airlines are unconcerned about Spirit’s market entry, and largely ignore the ULCCs' presence.

American for quite some time has stated that it pays attention to Spirit’s movements, and has concluded the ULCC is a formidable competitor. Throughout 2015 American has highlighted the increased competition it faces, but it recently quantified the threat it faces from ULCCs and now finds itself assuring investors that its matching of fares offered by discounters is not permanently threatening its revenue profile.

Spirit has not escaped the effects of American’s price matching. Its unit revenue degradation in 2015 has been the steepest among US airlines, and it sees no immediate end to the pricing pressure it faces in the market place. As large US airlines devise strategies to compete with Spirit, it appears that the passenger segment Spirit targets is relevant to airlines operating all types of business models, particularly in an environment where fuel costs remain well below historical highs.

Although the competitive dynamics between American and ULCCs, particularly Spirit, have garnered heightened attention in 2015, the reality is American and Spirit have competed for a number of years. As Spirit began migrating to the ULCC business model in 2006, it targeted Fort Lauderdale, which is 48km from Miami, a large hub for American and its main Latin American gateway. Spirit’s logic was it could enter a market dominated by one airline with lower fares and stimulate traffic. Its build up in Fort Lauderdale occurred prior to American’s 2011 Chapter 11 bankruptcy filing and the subsequent merger with US Airways.

Spirit’s strategy worked well as it targeted cost conscious leisure and visiting, friends and relatives (VFR) passengers travelling from South Florida to the US and Latin America. Since its IPO in 2011, its annual profit growth has been above 25% and pre tax margins reached 19% in 2014, 17% in 2013, and 12% in 2012. 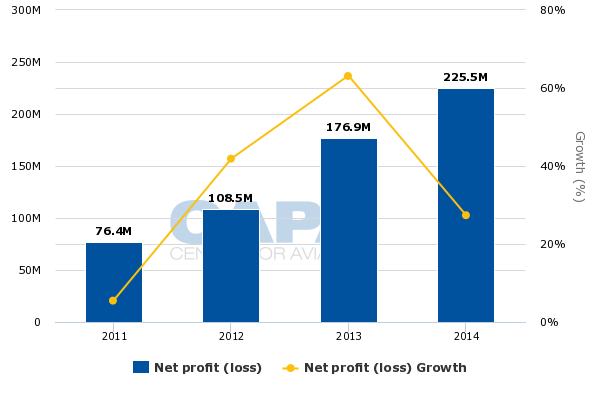 During 2012 as American was entrenched in its bankruptcy reorganisation, Spirit began a significant US domestic push, and re-entered the Dallas market in a large fashion.

It is now Dallas/Fort Worth’s second largest airline measured by seats, although American still holds a commanding seat share at DFW of 85%. 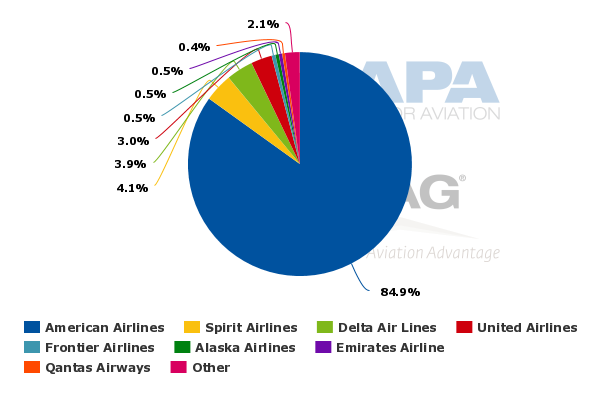 The Dallas market has drawn significant attention in 2015 after Southwest Airlines began a massive expansion from Dallas Love Field, beginning in late 2014 with the expiration of the Wright Amendment. That regulation prohibited certain long haul flights from the airport, and with its dissolution Southwest has proceeded to add more than 30 markets from Dallas Love Field including key routes to New York, Washington, DC, San Francisco and Chicago Midway.

Added capacity by Southwest and lower fares have created pricing pressure in Dallas, which has been highlighted by American, Spirit and Virgin America throughout 2015. Virgin America launched service from Dallas Love Field in late 2014.

Among the three large US global network airlines, American has the largest network overlap with Spirit. At the end of 3Q2014, Spirit estimated it had 50% overlap with American, due in part to Spirit’s expansion from Dallas/Fort Worth.

American’s decision to match the discounted fares in markets where it competes with lower cost airlines and ULCCs has generated questions from investors about how the price matching will affect the major airline’s revenue generation. American’s pledge of price matching is occurring against the backdrop of much lower fuel prices, which is also driving down domestic pricing, particularly on marginal flying that becomes more viable for American, Delta and United in a lower fuel cost environment.

Recently American president Scott Kirby outlined the logic for price matching and assured the airline’s performance on routes where it engages in that behaviour is positive.

Roughly 87% of American’s customers during the last year were travelling on the airline for the first time, said Mr Kirby. That passenger pool represents 50% of the airline’s revenue. He also stated that roughly 85% of US domestic pricing is influenced directly or indirectly by low cost airline pricing. “It’s not just the 2% or 3% of revenue in markets that they’re in...it does affect a much bigger piece of the pie.” 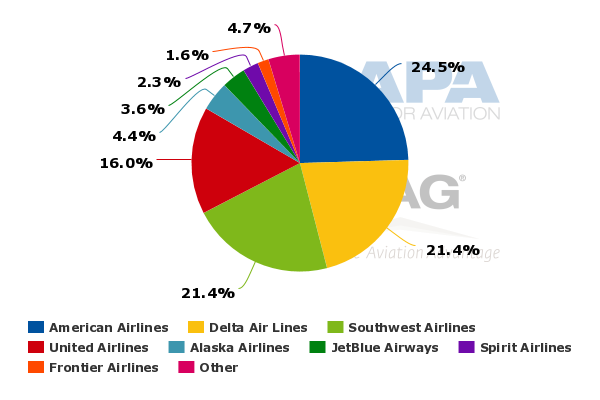 With roughly 50% of American’s customers up for grabs, Mr Kirby declared: “We just can’t walk away from the size of that business.”

He stressed in the markets where American has matched pricing, its unit revenue performance is the same as the rest of its system. One tactic American has used is running higher load factors on off peak flights, which is a more favourable proposition in a low fuel cost environment.

Mr Kirby stated there are other ways to fine tune revenue managing its matching of low fare competitors, and stated American is devising a product to more effectively compete with those airlines. Delta undertook a similar exercise in late 2014 when it debuted it Basic Economy product that features a low base fare, with items such as seat selection, change fees and baggage charged as add on items.

American in some ways has not had the full capability to devise a competing ULCC product, but with the recent completion of its passenger reservation system cutover, it now has freed up resources to dedicate to its strategy of competing with low cost competitors.

Spirit believes pricing pressure is widespread in the US market, downplays Dallas

In Dallas, Spirit is American’s number two competitor, larger than either Delta or United. Spirit transports all local passengers, said American's Mr Kirby. “So one Spirit flight is the equivalent of about three American Airlines flights, because we carry so many connecting flights. So if they fly a market twice a day, that’s the equivalent of American Airlines flying six times a day in terms of the amount of passengers they carry.”

During 2015 Spirit too has been challenged by the lower pricing traction in the US domestic environment. Its unit revenue degradation has been greatly deeper than the US network airlines, contracting 17.5% in 3Q2015 and 14.4% for the 9M ending Sep-2015.

More tellingly though, Spirit delivered pre-tax margins of 26.9% during 3Q2015. Yet its unit revenue declines appear to have spooked investors, which has resulted in pressure on its stock price. The airline’s share price was USD70.9 at the end of Oct-2014 and USD37.13 at the end of Oct-2015. 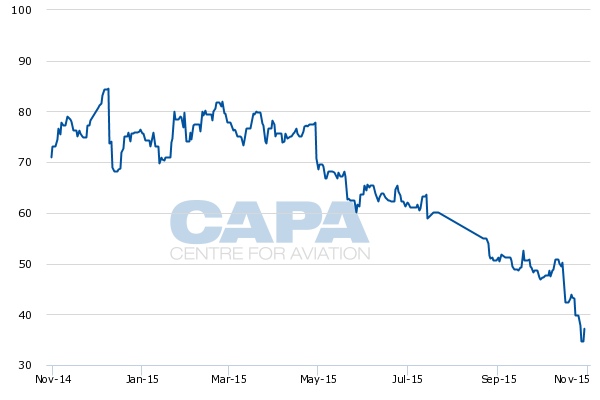 Spirit maintains that it has not grown in Dallas since 2013, and “we are actually a smaller percentage of Dallas today in the city than we were a couple of years ago as a result of the two largest carriers in Dallas hav grown individually greater than Spirit’s capacity in the last two years,” Spirit CEO Ben Baldanza recently declared.

Data from CAPA and OAG for the end of Oct-2015 show that Spirit served roughly 20 markets from Dallas/ Fort Worth. Its seat count year-on-year was down in seven of those markets – Atlanta, Chicago O’Hare, San Diego, Fort Lauderdale, Oakland, Detroit and Kansas City.

It posted flat growth on service to Denver, New Orleans, Las Vegas and Baltimore-Washington. During the last year it has entered the DFW-Cleveland market and relaunched flights to Boston.

Source: CAPA - Centre for Aviation and OAG
*Note: seats are approximate for one way

The airline estimated that 60% of its unit revenue decline in 3Q2015 was from price compression in a number of markets.

It opted not to break out the percentage attributable to Dallas, and concluded there are just more seats in the US domestic market. “Larger carriers have grown as well as our own growth. You need a lower price to fill those seats and that’s what’s happening around the US as bigger carriers are growing in this environment as well as smaller carriers.”

Low fuel prices in general have created an interesting paradox for US airlines. The majority of those airlines are posting record profits while passenger unit revenues continue to sink. It obviously makes some sense to offer lower fares on marginal flying in a low fuel cost environment, but price reductions prepare the foundation for difficulties when fuel costs rise.

Although it doesn’t look as if energy costs will rise rapidly in the immediate future, consideration needs to be given to the inevitable increase, and which airline business model is best positioned to thrive when fuel expenses grow. After all, nobody forecast the slump, instead focussing on the array of commercial and political factors which should have kept prices above USD100 a barrel.

American maintains that if fuel prices rise, its ability to compete is improved since fuel as a percentage of costs is much larger for low cost airlines, according to Mr Kirby. Spirit meanwhile would argue that its unit costs excluding fuel of less than USD6 cents allow it to compete effectively when fuel costs rise.

Both airlines have been profitable during periods of higher fuel costs; but a real likelihood is that in future the difference will be that American has no intention of ignoring the passenger base that Spirit targets, and based on its actions during the last year to offer a fare level similar to Spirit, neither is Delta.

Legacies are working to compete with ULCCs effectively. How will the discounters respond?

An interesting by-product from the pricing pressure in the US domestic market in 2015 is the premise of the ultra low cost business model that ULCCs tout to investors – that they are largely ignored by the big network airlines since those companies have no interest in the low yielding passengers targeted by Spirit and Frontier – has essentially been disrupted by the large network airlines.

American and Delta have been the most active in countering that theory, and neither airline shows any signs of abandoning or ignoring the passenger base that Spirit and Frontier target. Those large airlines have acknowledged the threat posed by ultra low cost airlines, and are now devising strategies to compete with the ultra discounters for the long term.

As the major airlines refine and deploy their strategies to counteract the ULCC threat, the position of the ultra low cost airlines in the US could shift depending on the tactics Spirit and Frontier deploy to combat the increasing attention they are receiving from American, Delta and United.

This is likely to be a continuing dance. After all, in a broadly similar market profile in Europe, it is the LCCs that have prospered, to the detriment of the majors. A difference there is that the majors have not been able to wash out their costs through the bankruptcy laundry, so the unit costs of the big three Europeans are higher than the US big three's.

So the warning message is there for the US majors: it is fine now to allocate a percentage of seats to low yielding passengers, but once cost levels start creeping up again, vulnerability to ULCCs increases exponentially.