Increasing caution is underlying positive commentary by US carriers Alaska, JetBlue and US Airways as each airline faced some areas of softness during 3Q2012 in their respective networks. But their overall view of trends throughout the remainder of 2012 and into 2013 remains optimistic, as reflected by Alaska and JetBlue adhering to previous capacity guidance that remains well above supply growth planned by their legacy carrier peers.

The bulk of JetBlue’s growth will continue in its Boston focus city, Latin America and the Caribbean, while Alaska plans to introduce three new markets during 2013 which should be unveiled in the coming weeks. It is unlikely that Alaska will continue its aggressive push into Hawaii as the carrier continues to reiterate that capacity gaps created by the demise of Aloha Airlines and ATA have been filled. Alaska also faced some competitive capacity pressure during 3Q2012 in its Hawaiian markets.

US Airways has not offered specific capacity guidance for 2013, but the carrier concludes that leisure demand remains strong, and believes those patterns should continue into the beginning of the year. However, the airline has admitted some weakness in pricing traction, which is pressuring yields.

All three carriers recorded healthy gains in pre-tax profits during 3Q2012, with Alaska and US Airways showing particularly strong growth. Each carrier also recorded gains in their respective top-line revenue performance, with JetBlue posting the healthiest year-over-year growth at 9%.

Despite positive pronouncements regarding the overall demand environment, each carrier highlighted some holes of weakness during 3Q2012. But at this point they are not yet ready to express caution regarding forward trends as Oct-2012 is showing promising momentum.

Reiterating previous comments, US Airways concluded that business demand in 3Q2012 was not as strong as the first five months of 2012, owing to macro-economic headlines that have spooked some companies into freezing their corporate travel plans. US Airways president Scott Kirby stated that overall “demand in the third quarter moderated somewhat from the very strong pace in the second quarter”. Still the carrier managed to keep its unit revenue growth roughly flat year-over-year, with a modest increase of 0.1%.

Delta’s conclusions of the US-Europe market during 3Q2012 mirrored observations by US Airways. Delta management recently remarked that “demand is moving both ways”, and stated that European multi-national corporations are looking more towards the US as those entities are facing challenges in conducting business in Europe.

Mr Kirby cautioned that while US Airways does not have a “better crystal ball than anyone else”, he cited still-strong leisure demand. He concluded leisure trends are more of leading economic indicator, and weakening demand in that sector is indicative of slowing consumer spending. “Leisure demand has held up quite strong for the past several months,” said Mr Kirby. Based on US Airways’ internal data, he feels reasonably good about the economic outlook for 4Q2012 and into 2013.

JetBlue offered a different assessment of leisure travel trends during 3Q2012 as chief commercial officer Robin Hayes noted the airline saw significant yield pressure across much of its leisure network as it introduced meaningful capacity into Latin America and the Caribbean. Mr Hayes remarked the airline is seeing some unit revenue pressure in those regions as JetBlue cycles against the capacity growth.

But he assured that JetBlue should lap up most of those increases beginning in Dec-2012, and that the yield pressure associated with the capacity growth should start to ease. Overall, JetBlue increased capacity by 8.6% during 3Q2012 compared with 6.8% growth by Alaska and US Airways’ 2.7% increase.

JetBlue has blunted some of the pressure on leisure unit revenues by turning a strong performance in its Boston focus city throughout 2012. CEO Dave Barger stressed that trailing 12-month pre-tax margins in Boston have improved by 8ppt year-over-year.

During 3Q2012 JetBlue’s competitive capacity in Boston fell by 6%, which helped bolster the carrier’s performance in the market. JetBlue expects competitive capacity in Boston during 4Q2012 to fall 5%, and Mr Barger expects to continue targeted growth in the market in 2013 through the addition of new business markets. During 2Q2102 JetBlue held a 23% seat share in Boston, compared with 15% for Delta, 11% for American and 15% for US Airways. 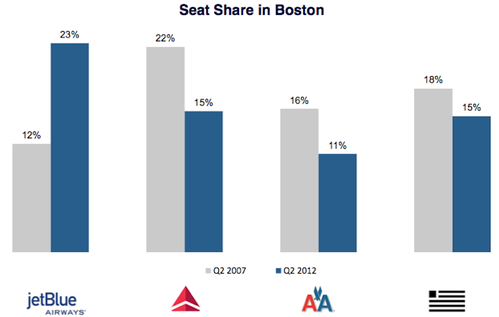 Elsewhere in JetBlue’s network, the carrier estimates competitive seat capacity in the Caribbean and Latin America should decrease by 1% to 2% in 4Q2012 and fall between 5% and 6% in 1Q2013. Competitive seating capacity in Florida is estimated to rise roughly 4% in 4Q2012 and 1Q2013. JetBlue's competitors in US transcontinental markets are expected to grow seat capacity by 2% to 3% during 4Q2012.

While JetBlue and US Airways drew different conclusions regarding leisure demand during 3Q2012, Alaska Airlines characterised the demand environment as stable despite continuing concerns at the macro-economic level. The carrier remarked that both leisure and business demand appear to be holding up.

Specific to Alaska’s network, the airline faced pressure in some of its Hawaiian markets during the northern hemisphere summer as competitive seat share between the San Francisco bay area and Hawaii increased by 25% and from southern California to Hawaii by 15%. Alaska VP of planning and revenue management, Andrew Harrison, stated that going forward, as the airline learns about the market dynamics in Hawaii, Alaska would make refinements to its Hawaiian network as its rapid growth in the market during the last few years begins to slow.

Mr Harrison estimated that Alaska, during the 12 months ending Sep-2012, launched 17 new markets, and remarked that it usually takes one to two years for new markets to spool up. Presently, the airline is offering some promotional fares in those markets, but overall the airline has no concerns about the performance of the new additions.

Both Alaska and JetBlue are sticking with their supply growth plans even as some of the demand patterns are showing hints of softness. Alaska plans to increase capacity by 7% to 8% during 2013, driven partially by the net addition of seven larger-gauge 737-900ERs, which have 20 more seats than the carrier’s 737-800s.

Mr Barger rationalised the growth, noting that consolidation in the US is creating growth opportunities for JetBlue, and stated the airline was growing responsibly. During the last few years, JetBlue and US low-cost carriers Allegiant and Frontier have entered into regions or markets cut by legacy and larger low-cost airlines through their respective consolidations. Frontier and Allegiant in particular have recently launched service in markets abandoned by AirTran after it was acquired by Southwest Airlines in May-2010.

In contrast two of the largest participants in US airline consolidation – Delta and United – plan to cut their 4Q2012 capacity year-over-year by 1% to 3% and 2.2% to 3.2%, respectively.

Even as some cracks are appearing in the positive demand commentary offered by US carriers, airlines are encouraged by unit revenue trends for Oct-2012. US Airways estimates Oct-2012 revenue growth of 3% after recording flat growth in Sep-2012. Part of September’s lacklusture performance was driven by a reprieve US carriers were given in Sep-2011 on a ticket tax collected by the US FAA, as a dispute in Congress resulted in a suspension of the agency’s ability to collect taxes from airlines.

JetBlue expects its Oct-2012 unit revenue to fall in a range from a 0.5% decrease to 0.5% growth, but stressed the year-over-year comparisons would be difficult following 11% unit revenue growth during Oct-2011. The carrier is not offering visibility beyond Oct-2012, but management does not foresee any deacceleration of unit revenue performance during those months compared with Oct-2012.

As of 25-Oct-2012 Alaska’s consolidated booked load factor was up 2.5ppt for Oct-2012, 1ppt for Nov-2012 and 0.5ppt for Dec-2012. Mr Harrison stated the company’s trip length would be up 4.3% year-over-year and the airline was “recovering a little bit from understanding of the seasonality of Hawaii and California”. Despite those elements affecting bookings, he stated Alaska believes its performance during 4Q2012 should remain solid.

Alaska, JetBlue and US Airways are not outwardly expressing great concern over the slight slowing of momentum in some elements of their business in 3Q2012. But if the weakness worsens those airlines and other US carriers will face increasing pressure in sustaining the profitability they have achieved during the last couple of years. Carriers that argue they remain in growth mode may need to revisit some of their expansion targets if the expense of capacity expansion begins to outpace the anticipated revenue gains from seizing the opportunities created by consolidation.