After rationalising its own capacity in markets from the US mainland to Hawaii and seeing relief from competitors shrinking their supply, Alaska Airlines is facing pressure on long-haul markets to the state of Alaska alongside the build-up of new US transcontinental markets that crimped its unit revenues during 2Q2013. The carrier is also warning that its unit revenues will fall again year-on-year in 3Q2013.

The carrier previously warned of a tough 2Q2013 as more carriers added capacity from the US mainland to Anchorage during the summer high season. Its predictions crystallised as Alaska reported significant decreases year-on-year in its yields and unit revenues during the quarter.

At the same time Alaska is feeling pressure from some of its own rapid growth – the introduction of roughly 30 new markets within the past three years. With the bulk of that expansion complete, Alaska during the next year plans to digest the rapid expansion, and states it may not introduce any new markets during 2014.

But on a unit basis Alaska’s consolidated performance in 2Q2013 was weaker, as passenger unit revenues and overall unit revenues (including ancillaries, freight and mail and mileage plan) each fell 3.8% while yields dropped 3.7%.

The culprit behind Alaska’s weaker performance was pressure in its markets from the US mainland to the state of Alaska as Delta, United, JetBlue and Frontier have all stepped up service to Anchorage in the summer high season.

In a recent earnings discussion Alaska management explained that during 2Q2013 roughly 12% of its capacity was deployed to the state of Alaska, and yields dropped by 10% in those markets year-on-year. Executives also stated the company’s system passenger unit revenues were pressured by a 43% increase in capacity by Alaska on transcontinental routes from Seattle, San Diego, Philadelphia and Boston. Those markets are still considered in the developmental phase as a result of their longer than average stage length, Alaska explained.

Its service launches during the last year and a half have included Seattle to Kansas City, San Antonio and Salt Lake City; San Diego to Orlando and Boston and Portland to Washington National.

Commenting on the performance of a couple of specific transcontinental markets during 2Q2013, Alaska vice president of planning and revenue management Andrew Harrison remarked that load factors to Fort Lauderdale (Alaska began serving Seattle-Fort Lauderdale in 2012 after serving Miami since 2002) and San Diego to Orlando were roughly 88% and 89%, respectively. The carrier expects further improvement as those operations are moving from red-eye service to a daytime schedule.

Overall, Alaska in most of its new markets is seeing a move to profitability during the first year, Mr Harrison explained, noting that by year two the carrier should post solid results on those routes. However, he also stressed any under-performing routes would be cut by year three “or even before that”.

But in the short term Alaska will continue to see pressure from its own network expansion and the new competitive pressure in the state of Alaska as the carrier concludes its unit revenues during 3Q2013 will decrease, albeit at a smaller decline than the 3.8% posted in 2Q2013.

The carrier seems unfazed about the long-term effects of competitive capacity increases in the state of Alaska, as management concluded it has seen airlines and flights come and go during the years. But given its dominance (Alaska accounts for 56% of the seats on offer in Anchorage), history and the carrier’s namesake, Alaska remarked that it obviously plans to defend its stance in the state of Alaska. But those declarations are not appearing to help Alaska in the short term as its yields in Alaska during the summer high season are likely to sag year-on-year for the summer high season.

Alaska is recording yield improvement in Jul-2013 and Aug-2013, the carrier’s management stated, but remarked it is too early to comment with respect to financial performance on a unit basis for Sep-2013. In its latest investor update issued on 25-Jul-2013 Alaska stated that consolidated booked load factor (the percentage of available seat miles sold) was flat year-on-year for Jul-2013, up a single point in Aug-2013 and down 0.5 points for Sep-2013. Its planned consolidated capacity growth year-on-year for 3Q2013 is approximately 7%.

A turnaround in Hawaii

One geographical region that has improved for Alaska is the state of Hawaii after the carrier in May-2013 removed the equivalent of two aircraft from those markets to rationalise its frequencies and capacity. Other airlines serving Hawaii have also tabled service reductions, which created an opportunity for Alaska to improve its fortunes during 2Q2013 on its routes to Hawaii, which represent about 22% of its capacity.

Alaska executives stated that Hawaii now, “is in a positive unit revenue situation”. During 3Q2013 and 4Q2013 Alaska plans to continue reducing capacity on those routes without actually eliminating a single market to Hawaii since it started making its push into the Hawaiian islands during 2007.

Taking capacity down a notch during 2014

Alaska’s full-year capacity growth of 7% for FY2013 should slow during 2014 as the carrier’s management states it will take some time to absorb the numerous new route launches it has executed during the past three years. Mr Harrison remarked that the carrier is taking delivery of two aircraft during 2014, which equals roughly 6% growth. “We may not start any new markets next year,” he declared. The estimated 6% growth is about 2ppts lower than the 8% capacity expansion Alaska recorded during 2012, and probably allays any concerns investors might have about the carrier’s higher-than-average industry capacity growth during the past few years.

Alaska’s consolidated unit costs during 2Q2013 were essentially flat as the carrier experienced maintenance cost pressures and the effects of a rate negotiation with Seattle Tacoma International airport.

The company believes it can keep its FY2013 unit costs flat, based on its increasing employee productivity (calculated as the number of revenue passengers per full-time equivalent employee). Alaska estimates a 5.5% rise in that metric during 3Q2013 and 6.7% in Jul-2013.

In the past Alaska has stressed that its unit costs need to fall more in line with its other US low-cost and hybrid peers. For the 12M ending 31-Mar-2013 the carrier recorded the highest unit costs – USD7.49 cents – among Southwest, Hawaiian, JetBlue and Virgin America. 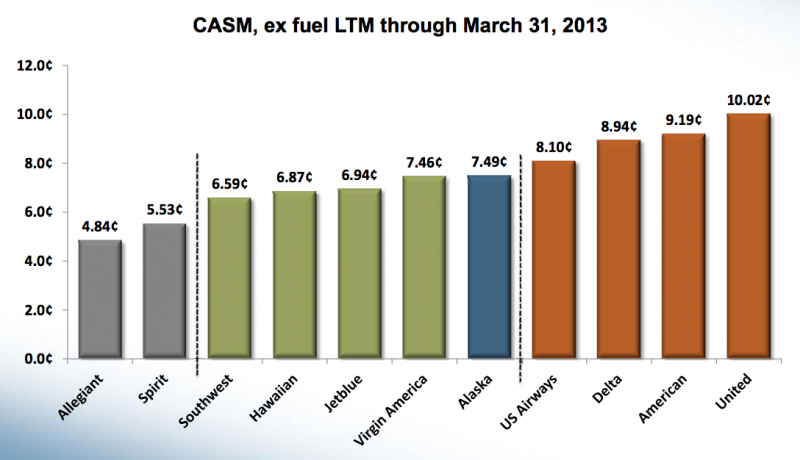 Alaska’s unit costs were USD8.31 cents during 2Q2013 and USD8.46 cents for 1H2013, and USD8.48 cents for the full year 2012.
Presently, Alaska’s guidance shows a 3% rise in costs excluding fuel for 3Q2013 to USD8.25 cents to USD8.30 cents. For FY2013 the current estimate is a 0.5% decline to USD8.45 cents. That guidance includes new labour pacts Alaska Airlines has reached with the Air Line Pilots Association, Horizon’s new agreement with the Association of Flight Attendants and the increased rent at Seattle-Tacoma.

Based on those numbers, Alaska faces a formidable challenge in achieving cost equilibrium with its US LCC counterparts. Previously, the carrier has highlighted that an increase in seat density on its next generation Boeing 737s is a tool in its arsenal to get it costs in line with the lower cost US operators.

During its earnings discussion Alaska management fully embraced a theory offered by an analyst that holding macroeconomic conditions constant (fuel and interest rates) the carrier should record a decent bump in margins during 2014 given its declaration that it was putting the breaks on new market growth.

In concurring with that thesis Alaska wisely cautioned that there are many things outside of its control, but on a purely theoretical basis, that is the carrier’s line of thought. With 17 consecutive quarters of profitability in the rearview, it seems Alaska has a proven track record of withstanding marcroeconomic shocks, the challenge now appears to ensure its rapid expansion during the last three years sustains and grows its profits.