Strong global economic growth in the latter half of 2011 is expected to propel the aviation sector to “another good year” in 2011 with strong traffic growth in 2010 and the first half of 2011 demonstrating the industry’s resilience in recovering from a downturn and resuming its historical trajectory of impressive growth, according to Airports Council International (ACI).

Still 'a lot to worry about'

However, challenges remain, with ACI World’s Director of Economics Andreas Schimm noting that even against the backdrop of growth, “there is considerable uncertainty about oil prices, concern over sovereign debt, volatility in exchange rates, and in the US, slowing growth and persistent unemployment". All told, there is a lot to worry about, particularly in the developed economies. Growth in emerging and developing nations, however, is expected by the IMF to continue at a rapid clip, giving us considerable reason for further optimism about the remainder of the year.

ACI, in its report, presented data from 1,318 airports in 157 countries, revealing the following key trends:

The rankings of the world’s busiest airports for 2010 have yielded some key developments in global aviation.

The largest airport by international passengers was London Heathrow, followed by Paris CDG and Hong Kong.

Based on previously reported preliminary 2010 ACI data, the biggest improver in the Top 30 passenger traffic list for 2010 was Shanghai Pudong Airport, which surged 14 places to 20th position just behind mainland Chinese counterpart Guangzhou, which rose three places. Shanghai Pudong, which reported a 27.2% increase in passenger traffic last year, replaced Newark in the global Top 30. There were three Chinese airports among the world’s 30 largest passenger airports (four including Hong Kong), while the US had 13 airports in the top 30. Germany was the only other nation with more than one airport in the list.

Other notable performers, based on this previously reported data, included Jakarta, which jumped seven places to 16th largest and Singapore, which rose from 21st to 18th place. Dubai gained two places to 13th. Only two airports in the top 30 did not grow in 2010, Las Vegas (-2.6%) and London Heathrow (-0.2%). Charlotte (+10.4%) was the only large airport outside the Asia Pacific region and Middle East growing by more than 10%.

The Latin America-Caribbean region, fueled by strong growth in Brazil, steered all regions with a 13.2% year-on-year growth rate. The Middle East and Asia Pacific regions also experienced double-digit growth, with Africa just below them at 9.5%. In the Middle East, liberalised bilateral agreements and large increases in fleet capacity drove growth, particularly in the UAE and Qatar. In the Asia Pacific, India’s traffic grew nearly 15% and China’s nearly 14%, as the region once again increased its global market share, according to ACI. Increases in the mature North American and European markets were 2% and 4.3% respectively although they remain the number two and two regions for market share, although Asia Pacific is rapidly closing the gap. 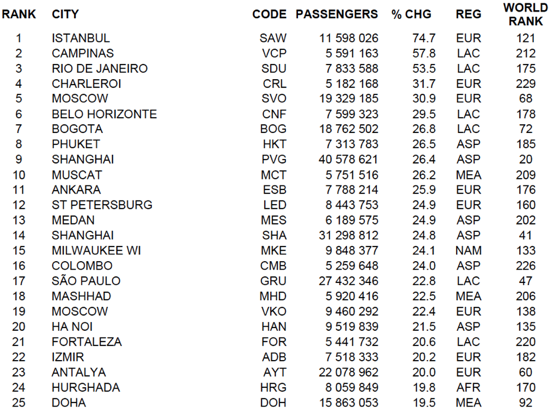 Memphis-Shelby County Airport Authority President Larry Cox, in an interview with The Commercial Appeal earlier this year, confirmed that Memphis’ 18-year reign as the world's top cargo airport has ended, stating: “Nothing lasts forever.” Mr Cox stated the change represents a "global shift", adding that Hong Kong would have likely overtaken Memphis a couple of years earlier, had the global recession not slowed China's economic momentum. Separately, an AAHK spokesman commented: "The last five years, it's not been a question of if it was going to happen, but when. It took longer than we thought."

Worldwide cargo demand rose strongly by 15.3% last year, according to ACI. The freight recovery was “more coherent and comprehensive” than the passenger segment, according to the airports body. All regions showed a robust double-digit increase, led by Asia Pacific (+18.5%) and Europe (+15.5%). As previously reported by ACI, international freight was the driver of the air freight recovery as total tonnage jumped by 20.5% compared with 2009.

Rounding out to top 5 airports by cargo was Shanghai, Seoul Incheon and Anchorage, which reported a 36.6% jump in cargo volumes in the year.

Other than the change at the top of the cargo rankings, very little changed among the Top 30 cargo hubs last year. Paris CGD regained four places, to come in as sixth largest, while Louisville dropped four places to tenth.

Beijing, which became the world’s second busiest passenger airport last year, actually dropped two places in the cargo rankings in 2010 to 16th, as per previously released preliminary ACI data for the year, while Shanghai Pudong remained the third busiest (with a 27.1% surge in volumes last year). Guangzhou remained 21st and Shenzhen rose three places to 27th busiest, and reported the fastest cargo growth in 2010 among the top 30 freight airports, with growth of 33.6% year-on-year. Excluding Hong Kong, China had four airports in the top 30 list, behind the US which had 10. Atlanta, meanwhile, replaced Dallas/Fort Worth in this year’s top 30 cargo airports.

Hong Kong Airport was the also the largest airport by freight excluding mail in 2010, followed by Incheon, Shanghai, Dubai and Frankfurt.

Atlanta Hartsfield maintained its position as the world’s busiest airport by aircraft movements, despite a 2.1% year-on-year decline in movements, followed by Chicago and Los Angeles. Eight of the top 10 places are held by US airports, although China's Beijing Capital is rising up the rankings, gaining two places with a 6% increase in movements last year to finish eighth. Paris CDG meanwhile slid three places to 10th in 2010 as movements fell 4.8%.

Based on preliminary data, other notable movers were New York JFK, which dropped from 17th to 21st. Detroit and Miami each gained three places to 14th and 24th, respectively, while Los Angeles Van Nuys dropped out of the global top 30, replaced by Tokyo Haneda Airport, which came in 29th.