Aerospace shares closed generally lower on Tuesday, as aerospace stocks deal with the fall-out from the Middle East and North African unrest and the jump in oil prices. The largest drops were seen in AAR Corp, Bombardier and BAE Systems. AviChina went against the trend, posting a 9.9% jump.

Airbus announced it aims to win more than 20% of orders for commercial aircraft in Japan from 2011 and beyond. Japan’s two largest carriers, All Nippon Airways and Japan Airlines, have traditionally been strong Boeing customers. A recent order for four A380s with Skymark Airlines and a leasing agreement with A&F Aviation for ten A320s from GECAS has bolstered Airbus’ share of the market.

Airbus also confirmed it wants to build up its partnerships with Japanese aerospace companies, and would like to see Japanese manufacturers contributing 10-20% of the content of the A380. Japanese firms manufacture around 4% of the parts for the aircraft at present. 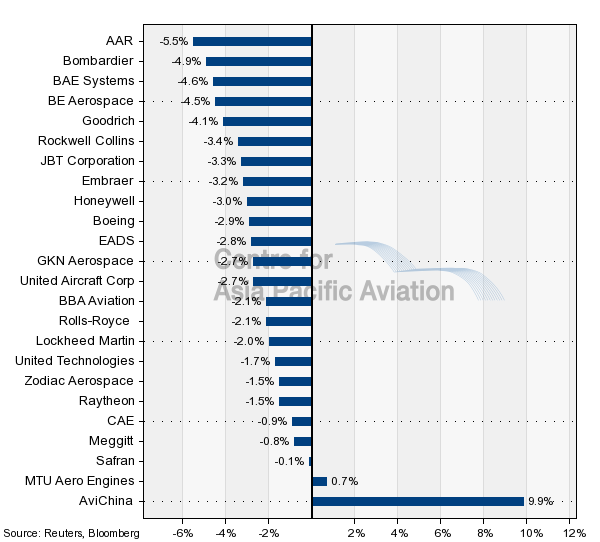