AirAsia X to become the ninth Asia Pacific low cost airline serving the US, and the third in Hawaii

Malaysia’s AirAsia X is launching services from Osaka to Honolulu in Jun-2017, making it the second LCC to operate from North Asia to Hawaii and the third LCC from Asia-Pacific. The route is made possible by a combination of liberal air service agreements, providing fifth freedom rights to the Malaysian airline. The Korean Air LCC subsidiary Jin Air and Qantas subsidiary Jetstar Airways are currently the only LCCs from Asia Pacific with service to Hawaii – or any of the 50 US states.

Asian LCCs will inevitably also serve the mainland US. Both AirAsia X and Cebu Pacific, along with new Chinese LCCs, have the US west coast in their business plans. Cebu Pacific is the only likely low cost operator of nonstop flights from Southeast Asia to the continental US.

Finally, AirAsia X to launch US flights in Jun-2017

AirAsia X announced in Feb-2017 that its maiden flight to the US would operate on 28-Jun-2017. AirAsia X will initially serve Honolulu with four weekly A330-300 flights from Kuala Lumpur with a stop in Osaka. AirAsia X is unable to serve Honolulu via Tokyo as this is not a permitted fifth freedom route under the current Malaysia-Japan air services agreement.

AirAsia X initially unveiled plans in Apr-2015 to serve the Osaka-Honolulu route from Nov-2015. At the time the airline expected it would only take a few months to secure US approvals, which proved to be an overly ambitious time frame. While economic approval from the US DOT is typically a quick process, securing FAA approval is often a long drawn out affair for any new airline that has not previously served the US.

See related report: AirAsia X long-haul low-cost service to the US will provide an important test for the Asian model

Not surprisingly, AirAsia X encountered multiple delays in securing US FAA approvals and had to push back the launch of Hawaii flights several times. Ultimately the approval process took nearly two years.

AirAsia X CEO Benyamin Ismail told CAPA TV in Nov-2016 that Osaka-Honolulu could be the first of several US routes. He said flights from Japan to Las Vegas, Los Angeles, and San Francisco are in the group’s medium to long term network plan.

Japan-West Coast US flights could potentially be launched in 2019, when AirAsia X takes delivery of its first batch of A330-900neos. Its current fleet of A330-300ceos, which are in 377-seat two class configuration, are able to operate from Japan to Hawaii but lack the range to connect Japan or other North Asian countries with the Continental US.

The longer range new generation A330-900neo opens up North Asia-Continental US routes for AirAsia X and potentially other Asian LCCs. However, nonstop flights from any of AirAsia X’s home markets in Southeast Asia – Indonesia, Malaysia and Thailand – to the Continental US would still not be feasible with the A330-900neo.

AirAsia X could potentially use the A350 to operate nonstop flights from Southeast Asia to the US. However, a combination of payload limitations on most potential routes, intense one stop competition and insufficient local demand make such flights a low priority for AirAsia X. Nonstop flights from Southeast Asia to Hawaii are also unlikely, given the lack of local demand.

Malaysia-Hawaii is a tiny market and therefore AirAsia X will rely almost entirely on Japan-Hawaii passengers for the second leg of its new Kuala Lumpur-Osaka-Honolulu service.

There are nonstop services from several Japanese airports to Honolulu but just one route from Japan to other airports in Hawaii – a thrice weekly service between Tokyo Haneda and Kona that was launched by Hawaiian Airlines in Dec-2016. 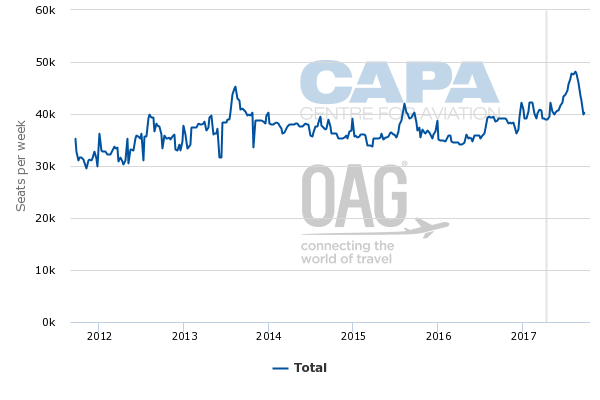 While AirAsia X will have a relatively modest 15% of seat Osaka-Honolulu seat capacity during the peak periods, its share will increase to approximately 20% during off peak periods as Delta and JAL seasonally reduce capacity.

Osaka to Honolulu one way weekly seat capacity by airline: Sep-2011 to Sep-2017 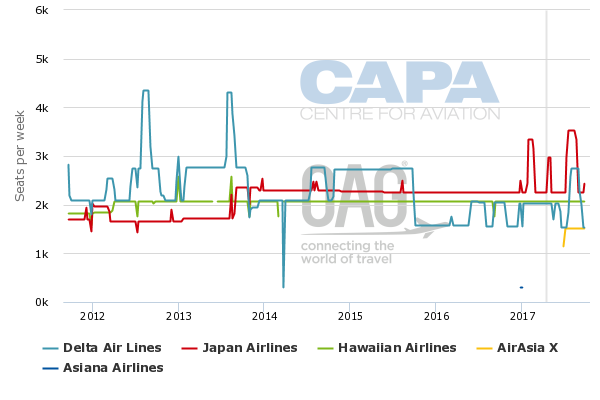 As Japan-Hawaii is almost entirely a leisure market, low fares should stimulate demand and lead to an accelerated rate of growth. However, with only a 3% share of Japan-Hawaii capacity – and a 1% share of total Japan-US capacity – AirAsia X will hardly make a significant impact.

AirAsia X is also not likely to generate a significant number of self connections from Honolulu to the US mainland, which will limit its impact on the overall Japan-US market. While there are no Asian LCCs serving the Continental US – and no US LCCs operating services to Asia – fares are now low due to intense competition.

A much larger proportion of AirAsia X’s Hawaii passengers will connect in Asia – although a majority of traffic will be Osaka area residents heading to Hawaii for holiday. The group is planning to offer domestic connections within Japan and to other North Asian countries once the second iteration of AirAsia Japan launches – which is expected in late 2017. AirAsia is also offering connections beyond Kuala Lumpur via its Fly-Thru product, resulting in a competitively priced two stop product in markets such as India-Hawaii and Singapore-Hawaii.

AirAsia X to become eighth Asian LCC to serve the US

In its 10-Feb-2017 Hawaii launch announcement, AirAsia X stated that it was the first Asian LCC to be approved by US authorities. However, actually AirAsia X is the eighth Asian LCC with US approval and an active US operation.

Currently seven Asian LCCs operate services to the US, including Cebu Pacific, Hong Kong Express and five from South Korea – Air Busan, Eastar Jet, Jeju Air, Jin Air and T’way. When the entire Asia Pacific region is taken into account, there are now eight LCCs serving the US, when Australia’s Jetstar Airways is added.

Jin and Jetstar are the only widebody or long haul operations among this group. The other six LCCs currently operate narrowbody aircraft to the US territories of Guam and/or Saipan.

Jetstar's LCC operation is the largest in the Honolulu market

Jin Air serves Honolulu most of the year with five weekly flights from Seoul, generating nearly 4,000 weekly return seats. This service is not currently operating – part of a seasonal suspension that runs from early March to late May.

Jetstar currently has the largest LCC presence in the Honolulu market. Jetstar has more capacity in Honolulu than either of the US LCCs serving Honolulu – Allegiant Air and Virgin America. (Virgin America is still categorised as an LCC but is in the process of being acquired by Alaska Airlines, which is considered a full service airline.) 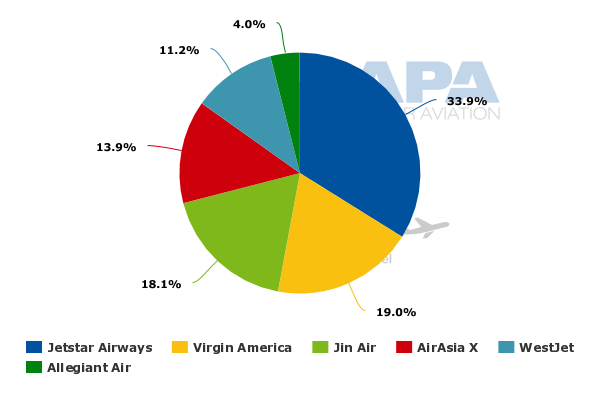 While Jetstar's is the largest LCC operation in Hawaii, Jin Air is larger in the overall US market.

Jeju Air the largest Asian LCC presence in the US market; AirAsia X will be the smallest

Jeju does not operate widebody aircraft and therefore does not serve Hawaii. However, it is the largest airline operation in the Korea-Saipan market and the second largest in the Korea-Guam market after Korean Air.

Jeju adds capacity to Guam and Saipan during peak periods. In early Jul-2017, Jeju Air will have nearly 15,000 weekly return seats to Guam and Saipan, enabling it to maintain its status as the largest Asian LCC operation in the US market, even as Jin resumes service to Honolulu. With its 3,000 weekly seats, Air Asia X will be the smallest of the nine LCC operations from Asia-Pacific serving the US.

Jeju Air launched services to Guam in 2012 and has since rapidly expanded in the Guam market. It has worked closely with Guam tourism authorities and hotels to expand the overall Korea-Guam market, which was previously only served by the Korean Air Group (mainly the full service parent airline, along with some flights by its LCC subsidiary Jin Air).

Air Busan and T’way followed Jeju, launching services to Guam in 2H2015. T’way currently operates a daily service from Seoul to Guam, as well as a daily fifth freedom route from Guam to Osaka. Air Busan, which is partially owned by the full service airline Asiana, operates five weekly flights from Busan to Guam.

Guam’s LCC capacity has increased steadily since 2014, when it was served by just one LCC (Jeju Air). Not surprisingly, Korean visitor arrivals to Guam have more than doubled since 2013. 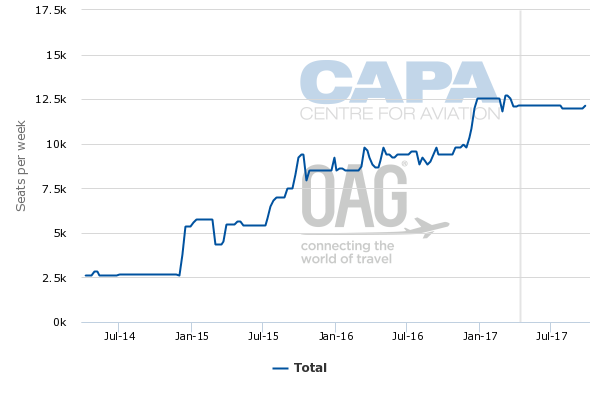 Eastar Jet, Jin Air and T’way all followed Jeju by launching services to Saipan in 2016. There are now almost 15,000 weekly LCC seats in the Saipan market – a significant figure, given that total capacity at Saipan is only 31,000 weekly seats. 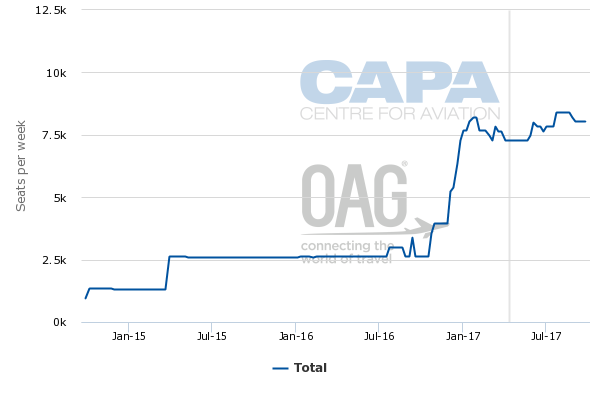 Eastar Jet and HK Express were the latest Asian LCCs to secure FAA approvals, completing the process in 2016. AirAsia X was therefore the eighth LCC from Asia – or the ninth from Asia Pacific to secure FAA approvals. While Guam and Saipan are often considered separate markets to the US 50 states, from a regulatory standpoint they are part of the US, and foreign airlines must go through the same approval process.

Despite the recent growth spurt, Asian LCC operations in the US represent a very small niche. Guam and Saipan are tiny markets, and unique in that they are closer to Asia than the Continental US. Hawaii is also a relatively small and unique market.

Asian LCCs are not likely to become significant players in the Continental US – at least not in the foreseeable future. The long length of flights and current intense level of competition make the Asia-Continental US market difficult to penetrate. The Europe-US market, which is now experiencing rapid LCC growth, is vastly different, due to the much shorter length of flight and the fact that Europe-US fares are generally higher.

There will inevitably be some LCC flights between Asia and the Continental US. AirAsia X is keen to enter the Japan-US West Coast market, possibly as early as 2019. Cebu Pacific is also now evaluating new generation widebody aircraft capable of operating flights from Manila to California.

The China-US market will also begin to be served by LCCs in the coming years. Lucky Air is China's first long-haul LCC and will be making Moscow its first destination. Lucky Air will initially fly aircraft with business class seats but will later consider all-economy configurations, amongst other transitions to lower cost practices.

However, competing in the China-US market will not be easy, given the rapid expansion in the US being pursued by Chinese full service airlines, which has already pressured yields and resulted in LCC like fares. Yields in most other Asia-US markets are also now at all time lows due to extremely intense competition. AirAsia X, Cebu Pacific and at least one Chinese LCC will probably still launch services to the Continental US, but the impact is not likely to be significant for at least the next five years.