Growth in international air travel slowed in Mar-2011 as the Japanese earthquake and political turmoil in the Middle East and North Africa stalled the previously strong growth in air travel on international markets, IATA said. The Association warned that the second quarter would likely see “continued depressed air travel markets” due to these events.

Underlying upward movement and “robust” economic growth may spur a second-half rebound, though “the big uncertainty is the price of oil”, which is hurting leisure travel in particular, IATA added.

These slowing growth rates represent a sharp deceleration in the growth of air transport demand from the situation in late 2009 and early 2010, when a post-recession rebound rate of around 10% was experienced. Last year international air travel volumes grew by 8.3% and international airfreight by 20.8%. Some slowdown this year was inevitable following the post-recession rebound in late-2009 and early 2010. However, until Feb-2011 air travel was growing close to its long-term trend of 6% a p/a. However, a number of events have significantly reduced air transport demand in the past two months. IATA estimates that international air travel worldwide was almost 2% points lower in Mar-2011 than it would have been in the absence of the events in Japan and MENA, ie international air travel growth would otherwise have been close to 6% a year.

Air travel markets shrank for a second consecutive month in Mar-2011, hit by the situation in Japan, continued unrest in the Middle East and North Africa and high fuel prices, which have had a particularly evident impact on the more price-sensitive leisure market.

Scheduled international air travel (RPKs) rose 3.8% year-on-year in Mar-2011, slowing following growth of 5.8% in Feb-2011, with the 11-Mar-2011 Japan earthquake and tsunami and Mideast unrest each responsible for about half of the slippage, IATA said. The slowdown in traffic in Mar-2011 came as carriers expanded capacity by 8.6%, a combination that resulted in load factors slumping 3.5 ppts to 74.6%.

“The profile of the recovery in air transport sharply decelerated in March. The global industry lost 2 percentage points of demand as a result of the earthquake and tsunami in Japan and the political unrest in the Middle East and North Africa (MENA),” said Giovanni Bisignani, IATA’s Director General and CEO. 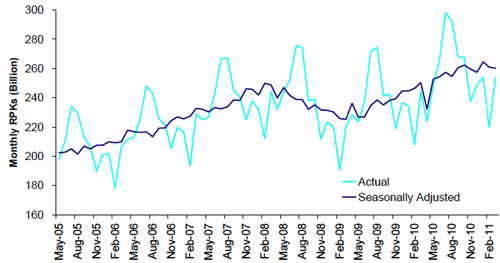 On a positive note, IATA sees that there is “strong demand” from business for premium travel that maintained 7.7% growth through Feb-2011. After further travel disruption in the second quarter, the underlying economic strength boosting business travel and supporting consumer incomes and confidence should generate a second half recovery, IATA expects.

However, IATA noted that “many leisure travellers are putting off flying because of the impact of high oil prices.  This has resulted in rising travel costs, dampening growth in price-sensitive travel. The fragility of the situation is demonstrated by the considerably weaker 3.3% year-on-year growth in economy class travel in Feb-2011."

During Mar-2011, Japanese domestic travel slumped 22% between Feb-2011 and Mar-2011. In a full month, that represents a contraction of the domestic market in Japan by one-third. IATA estimates that the fall in air travel volumes on international markets connected to Japan caused a loss of more than 2% for Asia Pacific region airlines, more than 1% for North American airlines and 0.5% for European airlines. International air travel markets overall were reduced by an estimated 1% point in March due to the events in Japan.

Egypt and Tunisia experienced traffic levels as much as 25% below normal for March and military action in Libya stopped virtually all flights to, from and within the country, IATA said. The disruptions in MENA cut international travel by 0.9ppts. Egypt and Tunisia experienced traffic levels 10-25% below normal for March, according to IATA.

Compared with Feb-2011, global passenger demand fell by 0.3% in Mar-2011. Large declines in air travel due to the events in Japan and MENA, which cut traffic (RPKs) by 1.9%, affected Asia Pacific, North American and European airlines in order of their exposure, but were in large part offset by strong growth in Latin America and Africa. 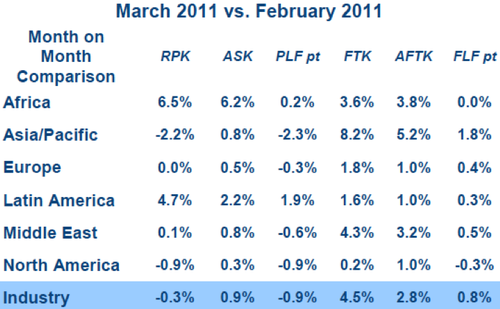 Source: IATA
Data are seasonally adjusted.
All figures are expressed in % change month on month except, PLF pt and FLF pt which are the percentage
point difference between load factors of two consecutive months.

International capacity (ASKs) rose at an annualised rate of over 11% in the first quarter, while traffic volumes grew by only 3%, as a large Jan-2011 rise offset falls in Feb-2011 and Mar-2011. Load factors fell very sharply as a result. 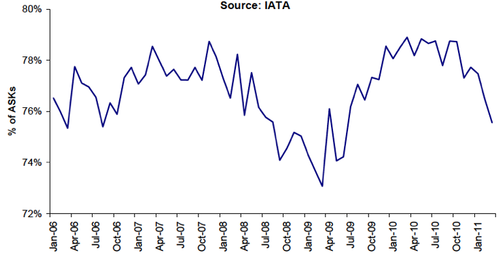 The only exception was for airlines in Latin America, where traffic volumes continue to grow ahead of capacity. All other regions have seen a deterioration in seat utilisation and supply-demand conditions in their international markets. On average, seasonally adjusted load factors have fallen almost 4ppts from the record highs of mid-2010. 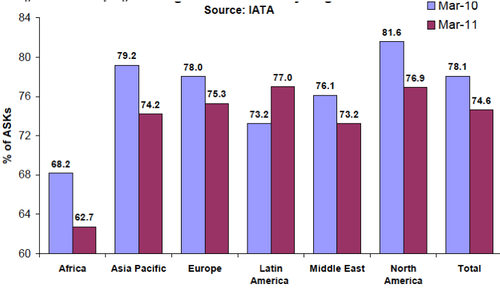 This load factor slump will have a direct negative effect on unit revenues in the first quarter. The loosening of supply-demand conditions that it represents will also make it more difficult for airlines to recoup higher fuel costs without damaging demand or without losing market share to competitors.

As usual, regional differences in passenger demand were evident in the month. Latin American airlines saw a very sharp improvement in markets in both Feb-2011 and Mar-2011. Meanwhile, African airlines saw a sharp reversal in growth, due to the political unrest in the region. Growth in other regions, such as Latin America, less affected by these disruptions, continued to show the strong upward momentum evident in emerging economies

Among the three large regions, air travel growth rates converged during 2010. In the immediate post-recession period Asia Pacific airlines benefited from exceptional growth, while Europe and North America lagged. Stronger international business travel in all regions led to all regions converging on growth rates of 6-8% towards the end of last year. Most recently Asia Pacific airlines have been hit most severely by the events in Japan, which are estimated to have cut growth by over 2ppts. The US economy has been doing better than expected, improving travel volumes, to the benefit of North American airlines. North American airlines saw their traffic cut by over 1% points by the weaker Japanese market. European airlines are suffering from weak home markets but international business travel is strong. These airlines saw a 0.5% loss from Japanese markets. 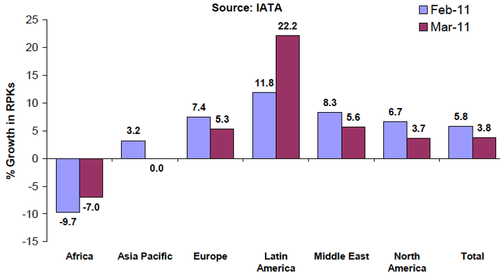 Air freight markets rebounded a little from depressed Feb-2011 levels in Mar-2011. International air freight volumes increased 3.7% year-on-year in Mar-2011, accelerating from growth of 1.8% in Feb-2011 when shipments from parts of Asia were limited by plant closures associated with the Chinese New Year. Compared with Feb-2011, cargo demand expanded by 4.5%, a figure which would have been higher if it were not for the Japan earthquake and tsunami. 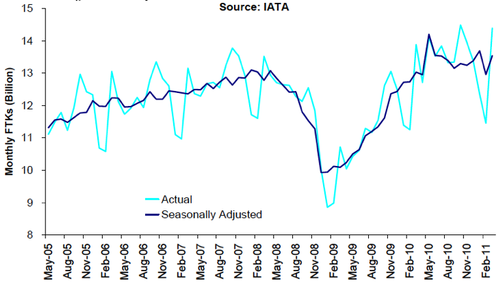 Japan is a key supplier of parts in the electronics and auto supply chains, which are both key air freight customers. The disruption to the supply chains in these industries would have caused a significant loss to air freight volumes in Mar-2010. Supply chain disruptions from Japan are likely to continue through 2Q2011 before a second half rebound, according to IATA.

From the 2H2010 until Jan-2011, international air freight expanded in tandem with the growth in world trade at an annualized rate of about 10%. This was dented in Feb-2011 when growth, for a number of factors, fell to 1.8% over the same month in the previous year. The 3.7% year-on-year increase in Mar-2011 reflects more normal trading conditions (outside of Japan and MENA) during the month. 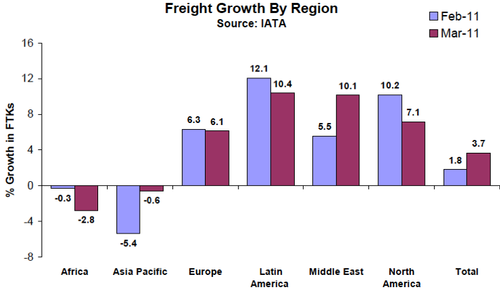 Meanwhile, freight load factors are down significantly from peaks earlier in 2010 but the decline has not been as precipitous as in passenger markets and the utilisation of freight capacity is still comparable with pre-recession levels. This may make it marginally easier for airlines to recoup higher fuel costs on air freight markets than is the case on passenger markets, according to IATA. 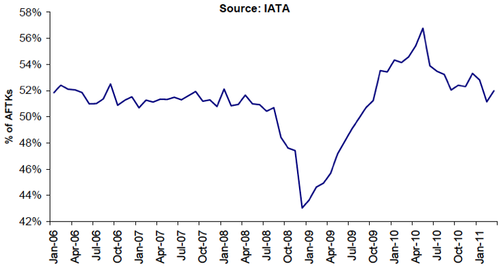 The exception is again for Latin American airlines where, because of strong demand, they have managed to continue to improve their load factors. 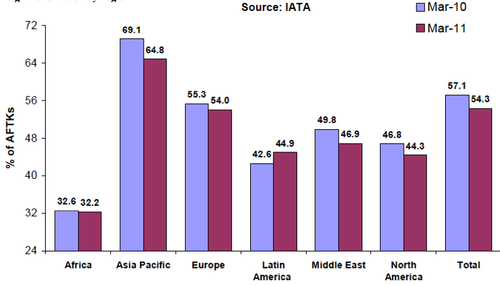