Air New Zealand's yields continue to tumble in July, with no end in sight 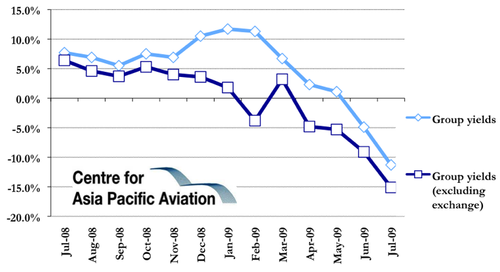 Long-haul yields down by double digits after a strong 2008

Last month's reduction was off double-digit growth in the corresponding period in 2008. According to the carrier, yields were higher in 2008, partially due to fuel price related increases, which have reduced as fuel prices has decreased.

This carrier is likely headed for another month of double-digit yield reductions in Aug-2009. 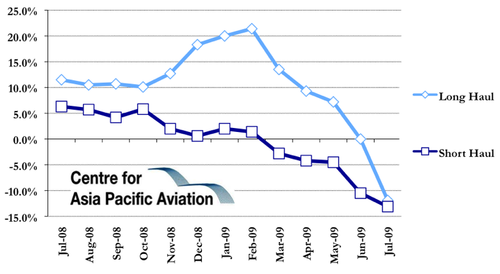 Group passenger load factor decreased by 3.2 ppts (domestic load factor down 1.8 ppts with Tasman/Pacific load factors increasing 2.0 ppts), although this was against a strong Jul-2008, in which the carrier benefited from the World Youth Day in Sydney, which increased passenger demand in the month.

Influenza A (H1N1) continued to soften demand from Japan with passenger numbers on Asia/Japan/UK routes down 24.2% year-on-year. The carrier reduced capacity on these routes by 16.2%, by combining flights from Osaka and Tokyo into a single flight and the down gauging to a B777-200 on the Hong Kong-London service.

Air New Zealand welcomed the agreement, stating it is now also working with the NZ Government to introduce check-in kiosks for trans-Tasman travel. Similarly, Qantas stated the changes to existing arrangements would provide some economic benefits through increased business and leisure travel and tourism.

The move is expected to place additional downward pressure on fares.

Air New Zealand would also be concerned by Jetstar’s statement this week that it has an "active pursuit” of future growth options within the New Zealand market.

The statement was made after the carrier announced an underlying profit before tax (excluding start-up costs) for its first full month (Jul-2009) of domestic New Zealand operations. Passenger seat factor was 78% in Jun-2009 and in excess of 80% in Jul-2009.

Pacific Blue also commenced test flights for its new E190s for international regional and New Zealand services in May-2009, with the carrier then stating that the E190 presents “other tempting opportunities to introduce further competition”.

The E190s are smaller than the B737s currently operated by the carrier on the routes, but larger than the turbo-props operated by Air New Zealand across its regional network. However, Pacific Blue has not yet disclosed a date for the commencement of E190 revenue services in New Zealand.

Jetstar's aggressive push on the Tasman and in domestic New Zealand will not go away, as the carrier made clear this week. Meanwhile, Pacific Blue continues to fight to maintain a presence domestically, with the possibility of utilising Virgin Group Embraer regional jets to access more regional points in New Zealand. All of this will continue the downward pressure on yields.