The rapid deterioration in Air New Zealand’s yields over the past six months appears to have stabilised in Sep-2009, after bottoming out in Jul/Aug-2009, with Group yields down 8.6% in the month, following contractions of 11.0% and 11.3% in the previous two months. Yields, excluding exchange rate effects, fell 10.4% year-on-year last month, following reductions of 14.1% and 15.1% in Aug-2009 and Jul-2009, respectively. Is this the start of a recovery, or a pause in a downward spiral? 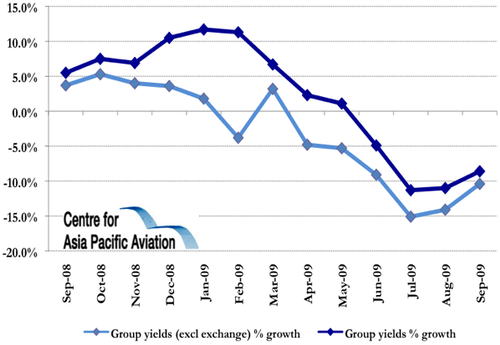 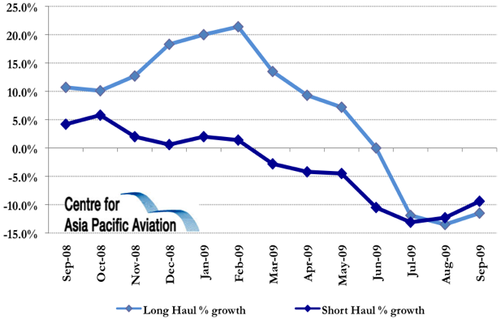 Load factors up for second consecutive month in Sep-2009

In more positive news, Air New Zealand’s load factors were up in the month, gaining 4.5 ppts, as the carrier reduced capacity (ASKs) by 11.9%, for two consecutive months of load factor improvements. Prior to this, the carrier experienced a double blow of sharp yield contractions and declining load factors.

The carrier reduced capacity on Tasman/Pacific routes by 13.1%, primarily through downsizing to smaller aircraft and the withdrawal of trans-Tasman services from Hamilton and Dunedin.

The carrier also reduced capacity on Asia/Japan/UK routes by 18.1%, helping load factors to gain 2.3 ppts to 81.9%. Load factors on North America/UK routes also improved, up 2.8 ppts year-on-year, with demand down 7.3% on a 10.2% capacity contraction.

Qantas/Jetstar continues its aggressive push on the Tasman and in domestic New Zealand markets, while Pacific Blue continues to fight to grow its presence domestically and internationally.

In response, Air New Zealand today unveiled moves to reduce its domestic fares by up to 23%, while also simplifying its fare structures.

Regional services, where Air NZ enjoys a virtual monopoly, are expected to benefit most, with new 'Smart Saver' fares introduced on all routes. This could be a pre-emptive step against Pacific Blue's potential entry into regional markets with Embraer jets and has significant yield implications as these are among the carrier's most valuable routes.

While the move will stimulate demand and load factors and place increased pressure on its competitors, it could undermine yields in coming months and must be accompanied by further efficiency gains if fares at these levels are to be sustained.

Overall, Air New Zealand CEO, Rob Fyfe, believes the current New Zealand domestic market with three players in "unstable". He told the New Zealand Herald, “two's company, three's a crowd. Certainly one of the competitors is finding it very challenging in the market at the moment when you look at their load factors. I guess it's kind of 'watch this space' at the moment”.