Part 1 of this report on Air Malta analysed its network, capacity development, codeshare partnerships and the competitive landscape in its markets. This second part looks at its financial track record and the development of its shrinking fleet and its financial track record. It also presents an estimate of Air Malta's unit cost position and the outlook in the aftermath of the Alitalia talks.

Air Malta's majority owner, the Maltese government, initiated a search for private investors in the loss making national airline in 2015. In Apr-2016 Alitalia signed an MoU with the government over the possible acquisition of up to 49% of Air Malta, but the two airlines announced on 13-Jan-2017 that talks had ended. It seems that the financial and political risks have prevented the investment from proceeding, particularly as Alitalia is wrestling with its own restructuring.

Its unit cost is efficient compared with European legacy airlines, but remains higher than the level of the LCCs with which it competes. Its short haul, non premium, point-to-point product has little with which to differentiate itself.

Air Malta has struggled to compete profitably and has reported several years of losses. A new plan is needed, and this may include a search for an alternative investor.

See related report: Air Malta Part 1: no longer the biggest airline in Malta as it struggles with rising LCC competition

All Airbus fleet reduced by two aircraft in 2016

The most recent financial data for Air Malta are for the financial year to Mar-2015 (FY2015). According to data taken from its annual reports, Air Malta plc's revenue fell by 7%, to EUR218 million, in FY 2015 after three years of modest growth. However, its net loss increased from EUR18 million in FY2014 to EUR26 million in FY2016, and its operating loss doubled from EUR12 million to EUR24 million.

Before restructuring costs, the operating loss increased 2.5 times from EUR9 million to EUR24 million. The operating margin fell by 6.6ppts to 10.5% in FY2015. 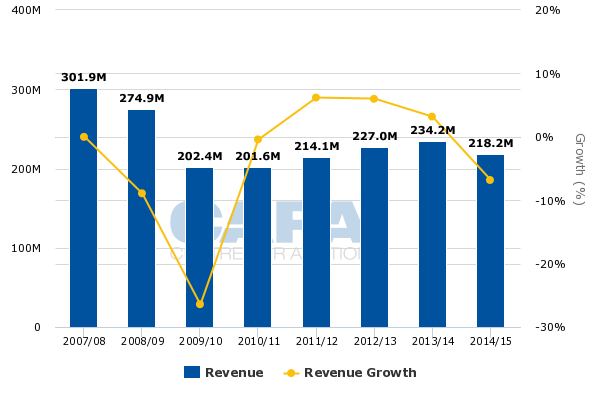 Air Malta plc has not made a net profit since FY2008, and then only thanks to discontinued operations. It has not made a positive operating profit in any year going back as far as FY2004 (the earliest year for which results are available on its website). 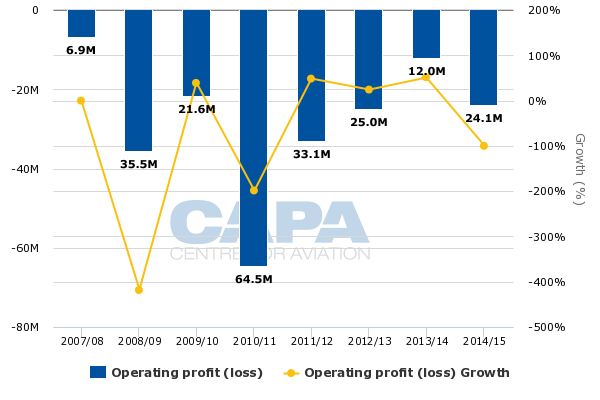 Based on Air Malta financial data for FY2015 and traffic data for the airline from AEA STAR for calendar 2014, CAPA has calculated an estimate of its unit cost (CASK – cost per available seat kilometre) and average trip length for its FY2015 (year to Mar-2015).

As was the case when CAPA previously made an estimate of its CASK in Sep-2013 (based on FY2012 data), Air Malta's unit cost compared favourably with other legacy airlines in Europe, but still put it at a slight unit cost disadvantage compared with the LCCs in FY2015.

The CASK disadvantage relative to ultra LCCs such as Ryanair and Wizz Air was substantial, based on this analysis of Air Malta's last set of reported financial results. In spite of three more years of restructuring, its relative position on a plot of CASK against average trip length had not really changed.

Data for the most recently completed financial year, FY2016 (year to Mar-2016) are not yet available. It is likely that lower fuel prices will have reduced Air Malta's total CASK, but its relative position compared with other European airlines is unlikely to be dramatically different.

As noted in part 1 of this report, Air Malta offers little to differentiate itself from LCC competitors in a leisure dominated market.

In Nov-2015 Air Malta's Board of Directors approved another three year business plan, covering FY2016 to FY2018. This plan aimed to restore breakeven in FY2017 (implying that FY2016 remained loss making) and to post positive results from FY2018.

The plan included: reducing the fleet to its current size of eight aircraft, major contract renegotiation, and improved efficiency and productivity. It also aimed to develop revenues by increasing load factor to compensate for expected yield reduction.

Losses have been inevitable without an LCC cost base

At the time of CAPA's Sep-2013 analysis on Air Malta its then Restructuring Plan aimed for a breakeven result in that year, FY2014, and a profit in FY2015. These targets proved elusive, and Air Malta has remained a perennial loss maker.

Competing with an undifferentiated product in leisure markets where LCCs are increasingly present makes it next to impossible to attract and sustain a revenue premium. This almost inevitably leads to losses when the cost base is not that of an LCC.

Outgoing Air Malta CEO Philip Micallef said, on his departure in late Jul-2016, that the company was "finally back on the road to profitability". Lower fuel prices will have helped, but sustainable profitability will likely require a further reduction in ex fuel costs.

The 27-Apr-2016 MoU with the Maltese government allowed Alitalia to launch a period of due diligence regarding the acquisition of up to a 49% minority stake in Air Malta. The government of Malta had initiated a search for potential investors in 2015 and it is understood that it had been in discussions with more than one airline.

The MoU gave Alitalia a period of exclusivity for more detailed negotiations. In addition to an equity stake, Alitalia also expressed interested in a management contract.

During the many months of complex negotiations, involving not only the two airlines, but also the Maltese government and Air Malta employees representatives, there were many public expressions of resistance to a possible deal that came from unions and Malta's opposition Nationalist Party.

Importantly, too, Alitalia itself often appeared lukewarm about the potential investment. Its CEO Cramer Ball said of the MoU in Apr-2016: "We will need to establish unequivocally that a deal with Air Malta will not undermine the progress of our three year turnaround programme, or prejudice our financial position".

Finally, after much speculation that the deal would not proceed, Alitalia and Air Malta issued a joint statement on 13-Jan-2017 saying that they had terminated negotiations. The statement said that "the current changing landscape in the airline industry was not ideal for a such a transaction and that both airlines would concentrate on the current challenges without entering into a partnership".

Air Malta and Alitalia will continue to collaborate through the new codeshare, but it seems that Alitalia's own restructuring is too important a focus for it to take on an investment in Air Malta.

See related report: Alitalia: "everyone has to pull in the same direction" – ongoing issues, and viability is at stake.

Moreover, Alitalia's shareholder Etihad, which was thought to be a key driver of the possible association between these two airlines, is showing signs of rethinking its equity partnerships.

Nevertheless, Alitalia's interest in Air Malta was at least partly understandable. The two airlines are geographical neighbours and are linked by cultural and commercial ties between Malta and Italy, which is Air Malta's biggest market.

The closer proximity of Alitalia's Rome hub, relative to other European hubs, could give Air Malta more long haul options via Alitalia. In addition, Air Malta has a codeshare relationship with Alitalia's biggest shareholder Etihad. The Abu Dhabi based superconnector has helped Alitalia's network development and offered both revenue and cost synergies.

The financial and political risks may have prevented the investment from proceeding, but the potential for Air Malta to develop its network offer in partnership with others can now be explored through the codeshare relationships with both Alitalia and Etihad.

Nevertheless, Malta’s Government is thought to be considering possible partnerships with private investors, whether other airlines or local investors. Air Malta has been reportedly linked with potential investors that include Air China and Turkish Airlines.

Any strategic airline investor will have to tread a careful political line to ensure the support of the Maltese government and Air Malta employees for any changes to the network and consequent changes to employee numbers.

Under whatever future ownership structure, Air Malta is no doubt considering how to improve its offer and lower its costs. It will need partners to strengthen its network, particularly in long haul markets.

Potential shareholders will also be examining ways to help Air Malta to revitalise its commercial strategy, including its service quality, approach to pricing, and ancillary revenue streams. A priority must surely also be to find sustainable CASK reduction opportunities.

One thing is certain: Air Malta will not be able to sustain losses indefinitely. The airline and its government owner face some important decisions - and soon.