Air Canada reports net income of USD259 million for 3Q2009, based on forex

The carrier reported a 13% year-on-year decrease in passenger revenue, due to an 11.2% decline in yield and a 2.1% drop in traffic. RASM decreased 10.2%, due to the decline in yield, as passenger load factor improved by 1.0 ppt. Unit cost (excluding fuel expense) meanwhile increased 4.5%, largely due to timing of aircraft maintenance and related expenses.

CEO, Calin Rovinescu stated “the worst of the worst seems to be behind us…We're seeing sprouts of green coming up from the earth” and now plans to focus on regaining Business demand, which the carrier believes will “come back slowly”. Revenue from Premium passengers decreased 16% year-on-year in 3Q2009, compared to a 30% decrease in 2Q2009. Air Canada partly attributed the improvement to the introduction of its lower-priced Executive Class earlier in the year. Mr Rovinescu that although Premium demand does appear to be on the mend, a full recovery in the market may not occur until mid-2011.

Mr Rovinescu added it could be 12 to 18 months until fares return to pre-global financial downturn levels, especially in business class as both Air Canada and WestJet continue to see improved traffic with their lower fares.

AirTran (11.8%) stated on Friday that it expects to make USD340 million in 2009 in ancillary revenue and sees more opportunities to expand its ancillary offerings.

Republic expects Frontier and Midwest to be profitable in 2010

Meanwhile, Expressjet (-4.9%) and Republic Airways (-2.5%) were the only two carriers seeing a drop in stock prices for the day. Republic’s stocks fell despite stating the day prior that it expects both its newly acquired carriers, Frontier Airlines and Midwest Airlines to be profitable in 2010. 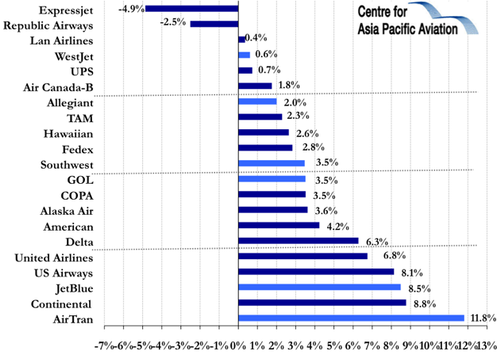