CSA Czech Airlines, the Czech Republic's flag carrier, operates over half of the nation’s fleet (61 aircraft are registered locally) followed by subsidiary Holidays Czech Airlines and low-cost carrier SmartWings. Traffic into the country’s principal gateway, Prague Ruzyne Airport, primarily consists of short-haul European traffic but the airport is focussing its sights on traffic from further afield. The Czech aviation landscape is set to change in 2012 with ownership changes of the national carrier, increased prominence of the national charter carrier and repositioning Prague into a long-haul traffic hub.

From its Prague base CSA operates scheduled passenger services throughout Western and Eastern Europe and the Middle East. The carrier also operates cargo and charter services. It had operated long-haul services, including to New York JFK, but in recent years has withdrawn the services, following fellow eastern European carrier Malev from Hungary. In 2011, CSA moved into state holding company, Český Aeroholding, established to manage the airline and Prague Ruzyne Airport.

CSA is a member of the SkyTeam alliance and has codeshare agreements with many of the alliance members, including Air France and Vietnam Airlines. Outside of SkyTeam, CSA codeshares with Etihad. 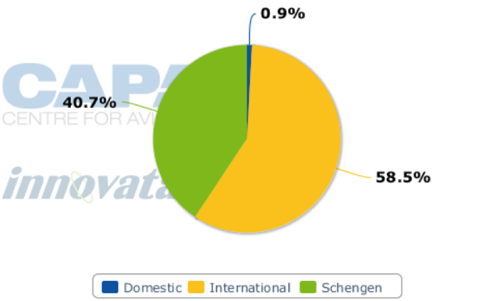 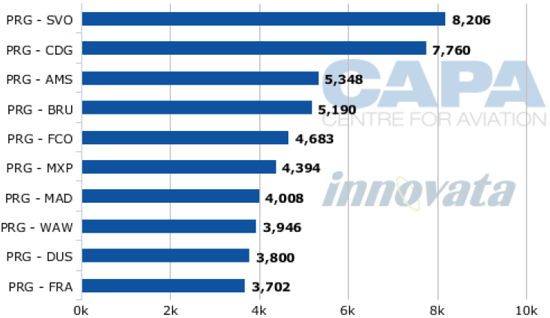 The latest traffic figures from the Association of European Airlines (AEA) showed CSA carried 14.3% fewer passengers in Oct-2011 year-on-year compared to Oct-2010, with average passenger load factor down by 5.9%. The majority of other carriers did see positive figures with only Iberia and Cyprus Airways reporting more severe passenger decreases.

CSA Czech Airlines is facing a difficult period in its history with industrial action under way by pilots concerned over the airline’s future and its relationship with subsidiary Holidays Czech Airlines. The airline is also thought to be heading towards privatisation in 2012.

The growth of the Czech charter market

Holiday Czech Airlines commenced operations for its parent carrier CSA Czech Airlines in 1985, and became an official subsidiary operator in 2010. Destinations for the charter airline include western European destinations such as the UK, Spain, Greece and Turkey.

The carrier currently operates a fleet of two A320 and two B737-400 aircraft. Its A320s are currently leased to Iceland Express and operate the carrier’s twice daily London-Keflavik services.

The airline’s fleet is set to grow with CSA Czech Airlines transferring 11 aircraft, including four A320 and seven ATR 42-500 aircraft, following an announcement made on 30-Nov-2011. To staff the expanding carrier, it will be hiring 100 pilots which are expected to come from CSA Czech Airlines after it stated it is intending to cut 100 pilot positions, a third of its pilot workforce.

The Czech Republic’s second charter airline, SmartWings, was established in 2004, and is fully-owned by Travel Service Airlines which itself is two-thirds owned by the Icelandair Group. SmartWings operates European short-haul services for Travel Service Airlines with holiday destinations including Malaga, Barcelona, Ibiza, Bilbao, Valencia and Palma de Mallorca. The carrier operates a fleet of 25 aircraft, consisting of an A320 and B737 mix.

CSA Czech Airlines codeshares on CCA’s 16 weekly Ostrava-Prague service, which offers 1056 seats per week (05-Dec to 11-Dec-2011). CSA offers a daily Prague-Ostrava service using 46-seat ATR 42-500 equipment, offering a total of 644 seats per week on the route. CCA does not codeshare on this service.

Prague Ruzyne Airport is the gateway into the Czech Republic and is a hub for CSA Czech Airlines, SmartWings and Hungarian low-cost carrier Wizz Air.

In 2011 the airport effectively merged with the national carrier into Český Aeroholding, a state holding company established to manage the companies. The airport has relatively low LCC penetration at 21.5% compared to full service carriers at 77.1%.

Prague reported a 4.17% reduction in international passenger movements for Oct-2011 year-on-year, but a more severe 45.32% decrease in domestic passengers travelling through the airport. National carrier CSA Czech Airlines’ Oct-2011 results released by the AEA show the carrier is likely to be a significant contributory factor to this negative result.

Cargo volumes also saw a decline in Oct-2011 with a 7.9% decrease year-on-year for international cargo through the airport. 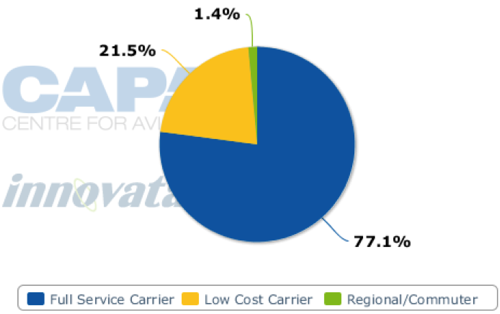 Prague Airport seems to be stepping away from CSA Czech Airlines' worsening situation by looking further afield for solutions to its weakening passenger traffic. The airport recently altered its focus with its sights set on attracting long-haul Asian traffic to choose Prague as the gateway to Western and Eastern Europe. The airport is also positioning itself as a transfer point for connecting traffic from Asia and is in negotiations with a number of Asian carriers to commence services to the Czech capital.

The airport’s top route by seat capacity is Seoul Incheon, served four times weekly by Korean Air. The only other long-haul route in the top 10 is to New York JFK, operated five times weekly by Delta Air Lines. The remainder of the airport’s international services consist of short- to medium-haul European routes. 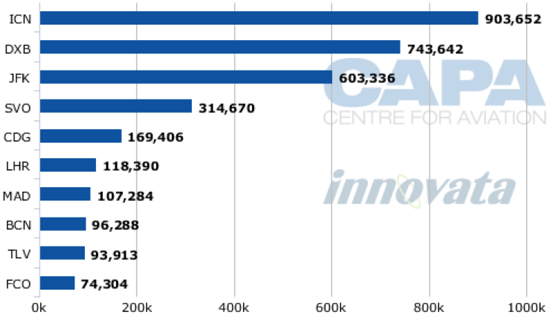 Other key players in the Czech market

The majority of Czech Republic traffic originates in, or is destined for, western Europe and this can be seen through the second and third largest carriers (by Czech capacity), Lufthansa and easyJet, respectively.

A noticeable absence in the market is Ryanair, which withdrew from Prague in Oct-2010 following a dispute with airport management over airport charges. 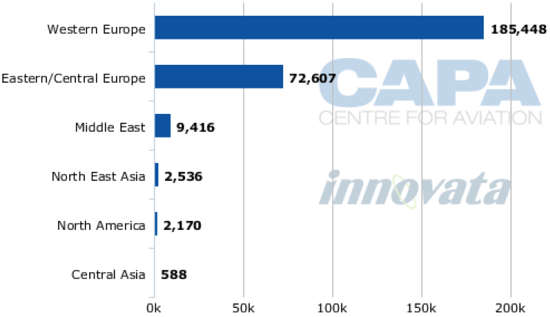 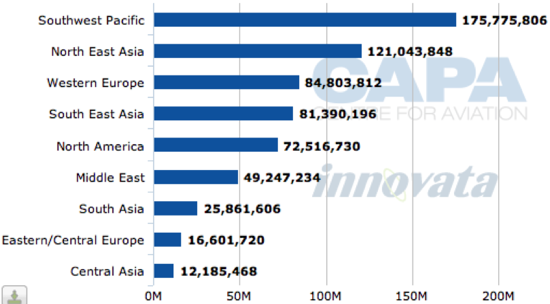 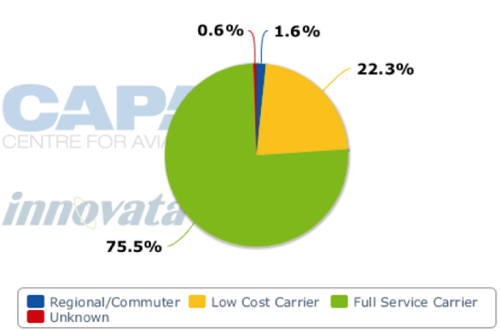 The future for the Czech Republic’s aviation industry is unclear, except that significant change in the nature of competition between the country’s airlines is likely with the potential privatisation of CSA Czech Airlines and significant expansion of Holidays Czech Airlines. Low-cost carriers will increase their presence in the market but with network carriers continuing as the dominant force. The type of traffic into Prague is also set to evolve with Prague Ruzyne Airport diversifying from serving mostly short-haul airline services to working towards transforming the airport into a long-haul traffic hub.