New long-haul service by Caribbean Airlines to London Gatwick has been plagued by disruption even before the initial launch, reflecting an overestimation by the carrier of easily adding widebodies to its fleet of Boeing 737s and turboprops, and gaining the necessary approvals to debut the flights in a timely manner. The carrier is also facing commercial challenges, having announced the routes only a few months before they were to launch, limiting sales time.

Caribbean detailed plans earlier this year to re-enter the UK market as Virgin Atlantic’s flights from Kingston, Jamaica to Gatwick were due to end in Apr-2012. The airline’s predecessor BWIA sold its London Heathrow slots to British Airways in 2007.

Caribbean is now is struggling to meet its targeted 14-Jun-2012 launch after reportedly encountering certification problems with two 767-300ERs it leased from LAN to support the new long-haul flights. In the meantime, it has leased another 767 from US-based Omni Air International in order to meet its launch target date.

The carrier has also already cut its planned frequency on the new flights from its Port of Spain hub to Gatwick from three weekly flights to two, and is dropping a planned stop-over in Barbados from Port of Spain enroute to London that was originally planned to begin on 30-Jun-2012.

These scheduling changes reflect the commercial challenges Caribbean faces in getting its new London flights off the ground and are hardly surprising as the carrier only started accepting bookings for the new flights in Mar-2012 for a Jun-2012 launch. Gaining ETOPs approval from any civil aviation authority is a complex and lengthy process, as evidenced by Allegiant Air’s recent experience in gaining the authority from the US FAA, which took years instead of months.

It is also difficult to be convinced of a strong business case for Caribbean’s launch to London (even with less inefficient 767s than the A340s that used to ply the market) as Air Jamaica lost approximately USD27 million during 2006 on its Kingston-London flights before dropping the route. Caribbean acquired Air Jamaica in 2010, and the two carriers operate under separate brands. While Trinidad and Tobago has a larger share of business traffic, it seems risky to launch such an expensive long-haul proposition after attempts by Air Jamaica and Caribbean’s predecessor BWIA to operate trans-Atlantic flights were less than stellar. British Airways, with an extensive feeder network, is already entrenched in the London Gatwick-Port of Spain route, offering daily flights through a stop-over in St Lucia. Caribbean is already starting out unreliably, having altered its schedule after encountering certification obstacles that should have been factored into its launch plans. 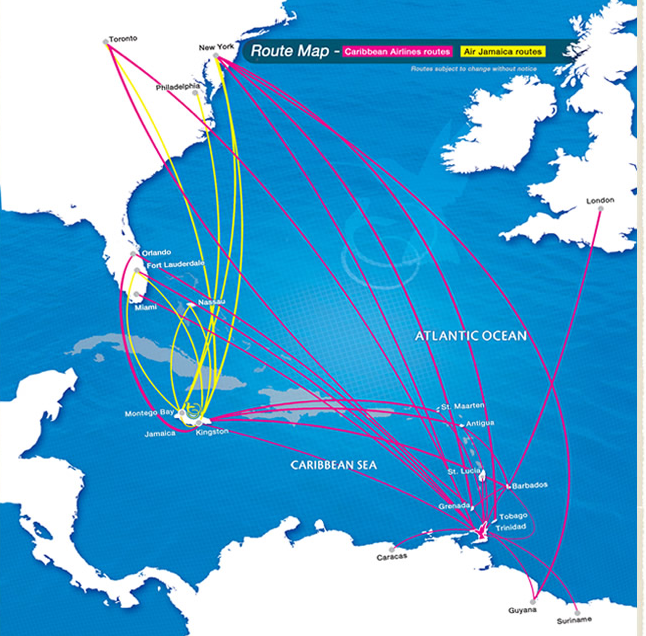 Caribbean has opted to drop from 01-Jul-2012 Air Jamaica’s Philadelphia-Montego Bay pairing, which has been a staple of Air Jamaica’s network, after determining the market was unprofitable. It is hard to find logic in Caribbean’s plans to move forward with riskier longer-haul flights to London if such a long-standing route in Air Jamaica’s network is losing money. Caribbean and Air Jamaica’s long-haul capacity is currently targeted to North America, so the carrier needs to strengthen its own backyard and ensure profitability before launching far more complex flights to Europe. 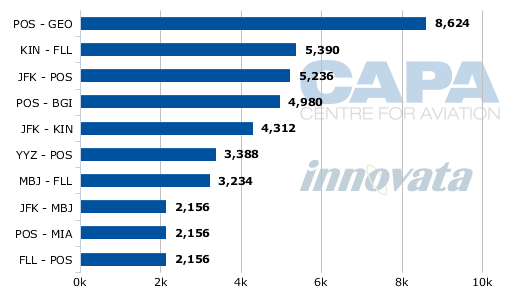 The carrier’s obstacles in launching flights to London are also underscored by a shaky management structure at Caribbean. Former CEO Ian Brunton abruptly resigned in Nov-2010 and in Apr-2012 the company named Rabindra Moonan as its new chairman.

Caribbean also appears to be encountering problems financing five ATR 72 turboprops. The Trinidad and Tobago Newsday is reporting that ATR officials recently met with airline management regarding payment for the aircraft. Caribbean signed a purchase agreement with ATR in Jan-2011 for nine ATR 72-600s, and agreed to lease two of the -500 model in the interim. The airline currently operates two of the -600s.

With all the other challenges facing Caribbean, including reported layoffs of Air Jamaica employees, it is at best ill-advised to embark on ambitious plans to launch long-haul flights that could add even more pressure to the carrier’s shaky financial state, which reportedly included a USD52.8 million loss for 2011.

As it works to meet its 14-Jun-2012 launch of new London flights, Caribbean has two idle 767s incurring expenses on top of the costs associated with selling and marketing the new service. It is a good bet that Caribbean’s second foray into the trans-Atlantic long-haul market could be very short-lived as it appears the carrier has few resources at hand to help stem the inevitable losses the route will produce.