Total airline seat capacity in Iceland this year is set to plummet by more than a quarter versus 2018. This marks a sharp reversal of the strong double digit growth catalysed by the LCC WOW air in the six previous years, when the market leader Icelandair Group and foreign airlines also pursued rapid growth.

WOW air's exit in late Mar-2019 has not only removed the biggest contributor to capacity growth, but has also prompted most of the remaining airlines in Iceland to ease back on the throttle. Excluding WOW air, the collective capacity of Icelandair Group and other airlines will be flat this year.

There is some variation within this. The LCC Wizz Air and the Nordic airlines Norwegian, SAS and Finnair are growing rapidly in Iceland, but Icelandair Group's growth is modest overall and operators such as easyJet and British Airways are cutting capacity.

In other aviation markets the gap left by the collapse of a major player is often fairly rapidly closed by other airlines. This is not yet happening in Iceland – evidence that demand had been artificially inflated by unsustainably low prices during the WOW air years.

Data from OAG indicate that seat capacity to/from/within Iceland will be reduced by 26.1% in 2019 versus 2018. This follows a dizzying six-year period from 2012 to 2018 when seat numbers grew at compound average growth rate of 21.2% pa.

The LCC's growth prompted expansion by others in the Icelandic market from 2012 to 2018.

The 26.1% drop in seat numbers in Iceland in 2019 mainly reflects WOW air's demise, but its departure also seems to have given others a breathing space: Icelandair Group's growth is slowing to just 2.3% and other airlines are collectively cutting capacity by 4.3% in 2019.

Looking ahead, falling capacity is set to continue in the coming winter schedule. OAG data for the first 16 weeks of winter 2019/2020 indicate a 25.0% reduction in seat count versus the same period a year earlier.

Again this largely reflects the absence of WOW air in the coming winter (it ceased operations at the end of last winter). However, others are also cutting capacity, although this varies by market.

Europe accounts for the bulk of Iceland's international seat capacity.

The North American market is more seasonal, with a high during the peak summer period when it accounts for just under one third, 32.8%, of international seats (based on OAG data for the week of 26-Aug-2019).

North America's share of international seats across the whole of summer 2018 is 28.1% and its share in the first 16 weeks of the coming winter season is just 20.5%, according to CAPA calculations based on OAG data. 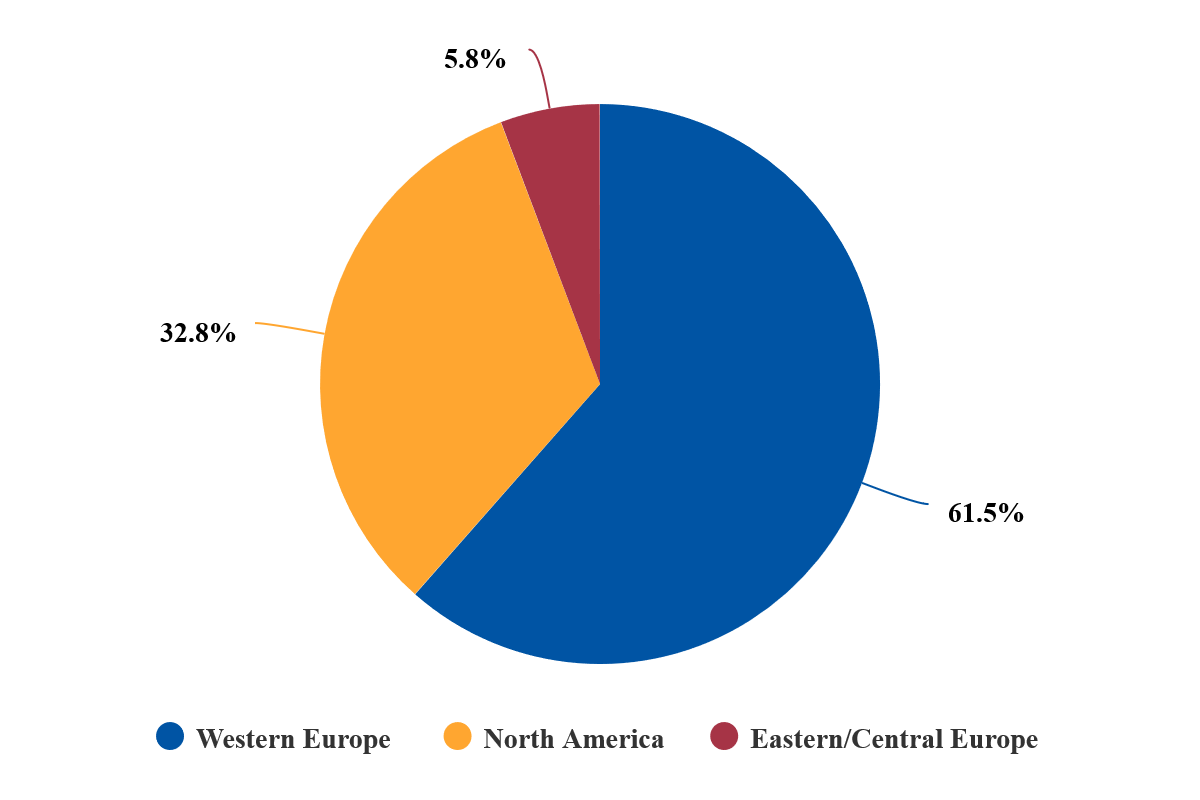 Iceland-Europe capacity to fall by 17.0% this winter

Excluding WOW air from last winter's Iceland-Europe capacity figures, like for like growth from the remaining airlines this winter season is set to be 3.8%.

Icelandair is taking a relatively aggressive stance on growth to Europe. It increased its capacity to Europe by 15.4% in summer 2019 and is planning winter growth of 7.9%.

After a 15.2% cut in the summer, Icelandair Group's regional subsidiary Air Iceland Connect, which operates to Greenland and in the domestic market, is cutting capacity by 18.3% this winter.

The ultra LCC Wizz Air is growing the fastest, expanding Europe-Iceland capacity by 74.9% in the coming winter (with strong growth both from Wizz Air UK and the parent airline), after a 34.8% increase in summer 2019.

Other airlines from the Nordic region are also growing capacity to Iceland in winter 2019/2020.

However, easyJet, which is the number two operator between Europe and Iceland this winter (after Icelandair), is set to cut capacity by 15.3% in winter 2019/2020, after a 12.6% cut in the summer.

EasyJet is concerned that British travellers are now less likely to travel to Iceland. It cited the impact of exchange rate movements, which have made Iceland one of the most expensive leisure destinations in Europe.

British Airways is also cutting capacity by 38.1% this winter, after a 24.7% cut in the summer. 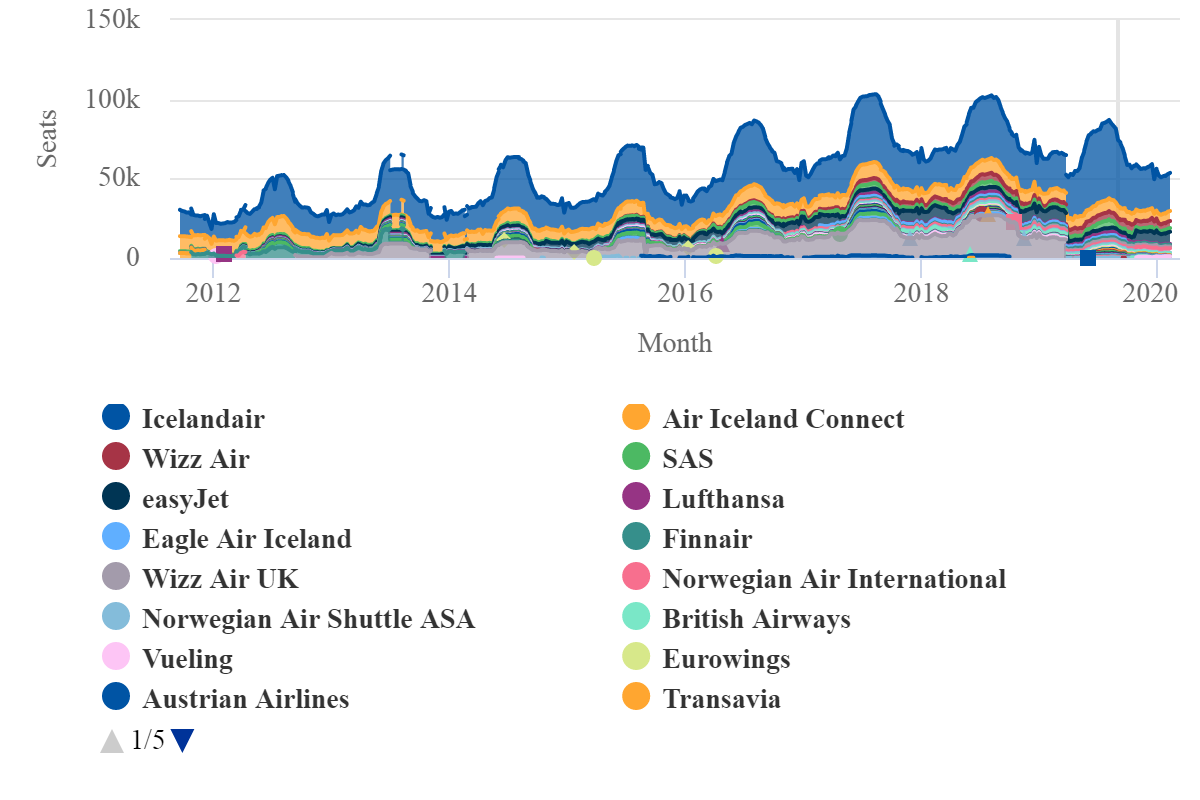 Iceland-North America capacity to fall by 45.6% this winter

Excluding WOW air from last winter's Iceland-North America capacity figures, the like for like capacity cut from the remaining airlines this winter is set to be 6.9%.

Icelandair's North America seat count is scheduled to fall by 2.3% in the winter, after a 4.9% cut in the summer.

Icelandair is the only operator in the coming winter schedule, since North American competitors operate summer only. In summer 2019 Delta grew by 2.7%, but American held capacity flat, United cut by 11.6%, and Air Canada cut by 26.8%. 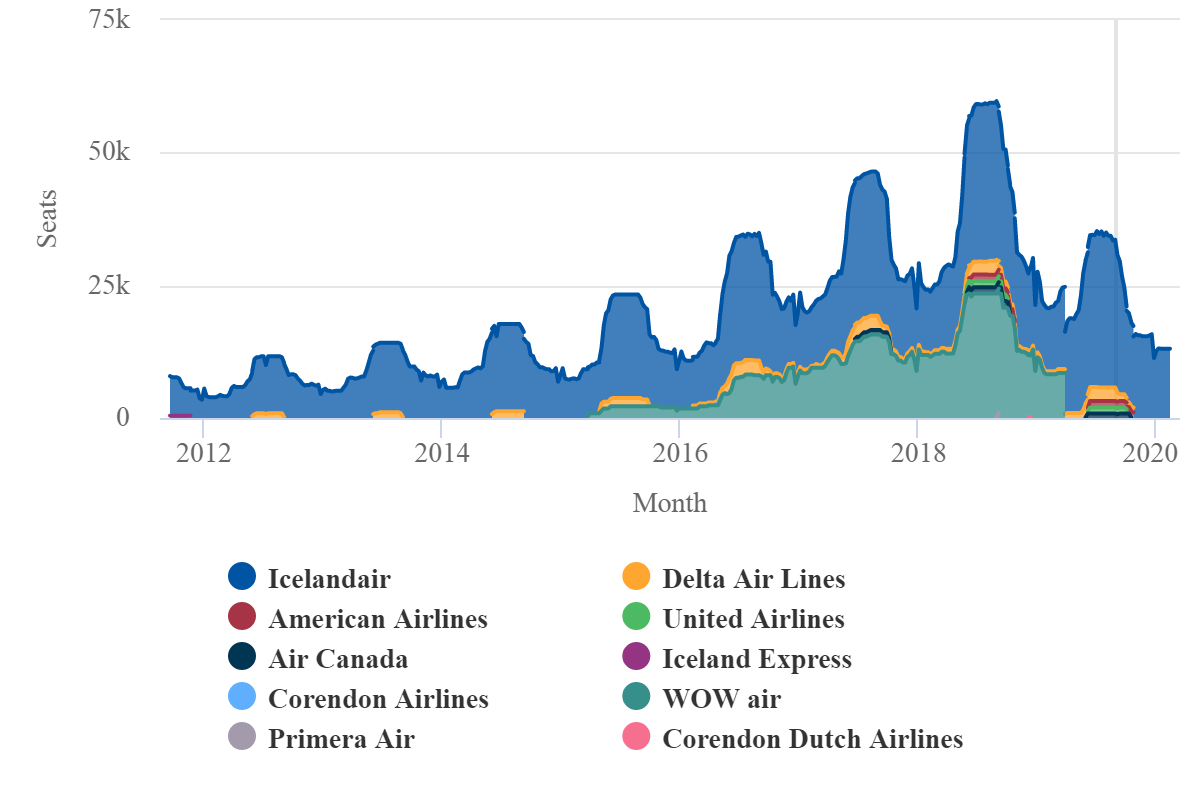 Iceland's schedule is dominated by Reykjavik Keflavik International Airport, which accounts for 91.2% of seats in the week of 26-Aug-2019.

Reykjavik Domestic Airport has 4.5% of seats and Akureyri Airport has 2.0%. No other airport has more than 1% seat share.

2019 is a transition year for Icelandic aviation

In spite of the exit of its biggest competitor, Icelandair Group's net loss widened in 1H2019 – to USD89.4 million from USD60.3 million a year earlier.

However, the suspension of the airline's 737 MAX operations contributed negatively and its loss would have narrowed to USD49.4 million. Its passenger numbers grew by 12%, driven by the point-to-point market segment rather than the transit segment, and its load factor gained 2.9ppts, to 81.8%.

However, the WOW air years helped to raise the profile of Iceland as a destination and this has led to increased growth from other competitors such as Wizz Air, Norwegian, SAS and Finnair, even if others such as easyJet and BA are cutting capacity to Iceland.

Dubbed WAB air, it aims to operate to Europe and the US in the low cost segment. It has applied for an operating licence and hopes to launch with six aircraft, possibly during 2019. The breathing space for Icelandair could turn out to be short-lived.

This year looks like a transition year for Icelandic aviation trends. It may take a year or two more to establish a new growth path.