Why Wuhan's aviation impact will be vastly larger than SARS

The year of the Rat has not begun auspiciously for Chinese travel. Whatever happens from now on, the Wuhan-originating corona-virus will have a vastly greater impact on the region's aviation and tourism than SARS did in 2003.

That is simply because in 2003 China's role in international aviation and tourism was a pale shadow of its enormous presence today.

In the intervening 17 years China has become the powerhouse of the region. Today, its tourists constitute the largest proportion of international visitors for most countries in Asia Pacific; they are also in many cases the biggest per capita spenders. And air services to and from China have in the meantime grown many times over.

One poignant example, although it seems hard to imagine, in 2003 there were no LCCs operating internationally in Asia. Today they play a major role in China services, both point to point and in connecting to third countries. Also, the number of Chinese airlines flying internationally has multiplied five times over, together making for a much more competitive marketplace.

Already, as the China lockdown continues and airlines cut back on services, both inbound and outbound tourism has staggered almost to a stop. The impact is already massive. What remains unknown is how long and how widespread the virus' spread will continue.

The good news is that all the evidence from SARS was that the industries bounced back very quickly over the following year, once the pandemic was contained. Although, given the lingering questions that remain over a wobbly Chinese economy, other factors might intervene this time around, particularly if the coronavirus becomes extensive in China.

The immediate impact of almost closing down the country for business, at the busiest travel time of the year, Lunar New Year, creates waves across both Chinese travel and tourism and a vital portion of the entire region's activity. Aside from the hundreds of deaths already reported, the number of confirmed cases in China itself well exceeds the level experienced during SARS.

In the short term, it is Beijing's (remarkable - and highly responsible) closing down of cities right across China that is having the most marked impact on the movement of people. This did not occur during SARS, allowing the virus to spread more widely and rapidly. Foreign governments are issuing travel warnings and many airlines are either halting service, or significantly reducing capacity into China and Hong Kong.

China's aviation and tourism influence has grown enormously this century

For several Asia Pacific countries, China has become a vital source of tourism; for Thailand, 11 million, or 28% of its international visitors came from China in 2019, and a quarter of its international airline seats were to/from China. Vietnam, South Korea, Japan and Taiwan are broadly similarly engaged in the China market.

A near-cessation of tourism, notably at this busiest time of the year, the Lunar New Year, will accordingly cause considerable pain to a wide range of tourism-related operations in those and other countries.

Corporate travel accounts for a disproportionately important level of airline revenue. Here, travel plans may well be disrupted for a considerable period as employers, conscious of their duty of care, are forced to cancel business flying to and from China, as well as other points like Hong Kong where the virus has taken hold.

Unlike private travellers, who may well be quickly lured back into previously infected areas by low fares, corporates will need to take a more cautious approach.

And the shape of the airline market has changed beyond recognition

At the time of SARS in 2003, the airline market was dominated by full service airlines, working in a relatively tightly controlled access regime. Today, with a much more liberal market access regime, LCCs are major drivers of aviation growth in the region and the number of participants in the market has increased greatly. Meanwhile the longstanding foreign full service airlines have grown more slowly, ceding very significant market share to the LCCs on short haul, intra-regional services.

This has several implications. For airlines it means the burden is more widely spread, and this is perhaps why the financial markets are reacting fairly mildly, with most affected airline share prices down only around 5% for the current week, to 30-Jan-2020 - although there are signs of further decline.

With the larger number of carriers now flying to and from China, the level of competition is accordingly very much greater. One implication of that is that once the virus is brought under control, encouraging travellers back into the market will involve significant discounting, at least for a period of weeks. As a result, the airlines involved are likely to experience prolonged financial damage.

The bounceback: post-SARs, recovery was swift

In 2003, Cathay Pacific was only a matter of days from shutting down operations completely, as its flights emptied at the peak of the SARS. One difference at that time was the Hong Kong carrier's much greater reliance on on-carriage to and from China, whereas today direct services account for a much greater percentage of China travel.

For Hong Kong Airport, the setback however comes at a time when the airport is still reeling from the effects of continuing demonstrations in the SAR. 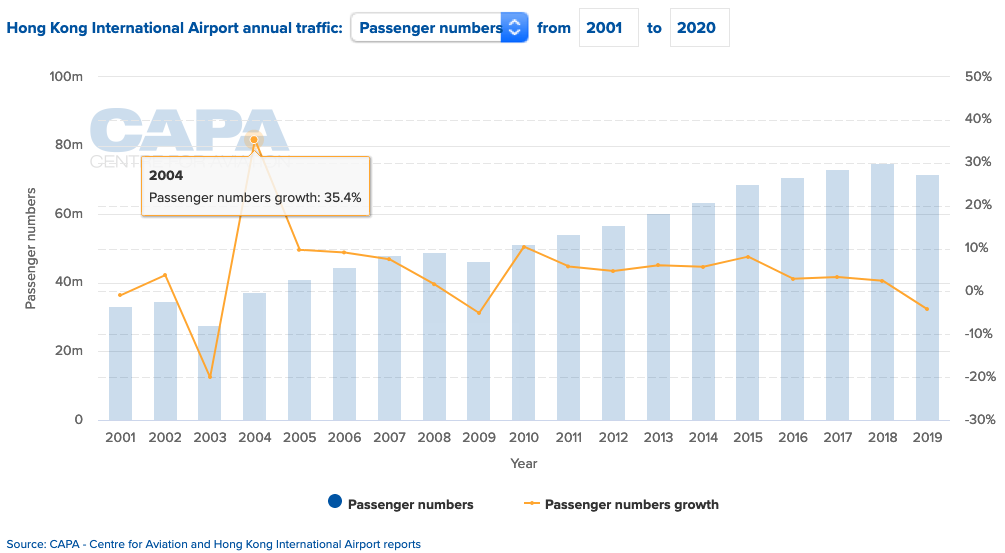 In domestic China, where around 90% of the air traffic at that time was domestic, Beijing Capital Airport rebounded with a 43% increase in 2004, and this picture was repeated to a greater or lesser extent around the region.

Today there is a caveat to anticipating rapid recovery

There is just one caveat to predicting a similar recovery post-Wuhan. In 2004, when travel bounced back so quickly the global economy was thriving and China was experiencing near-double digit economic growth.

Today, that economic growth is flagging and there are questions about where the economy is heading.

If the Wuhan virus continues to spread, the negative effects on the national economy could be proportionally more marked as a result.

CAPA MEMBERS - Stay up to date with the latest critical global developments effecting the industry with our customisable CAPA Alerts. Please contact our Sales Team for assistance.
MEDIA – If you are seeking further commentary on this topic, please contact our Marketing Team.