WestJet's shares slipped 1.5%, as the carrier stated it anticipates revenue per available seat mile (RASM) to decline by 15-17% year-on-year in 3Q2009, slightly better than the carrier’s original expectation.

The carrier also reported an improvement in Sep-2009 load factor, up 2.2 ppts to 77.7%. The Canadian LCC stated, “while the demand environment remained a challenge, our strategic capacity management, strengthening sales channels and strong brand helped us end the quarter on a positive note."

GOL’s yield suffers in Sep-2009, due to “highly competitive price scenario” in the domestic market

Southwest Airlines' shares slipped 1.3%, after the LCC was downgraded from “outperform” to “perform” by Raymond James, due to its "premium valuation" and stronger cash positions among some of its weaker rivals, due to recent cash boosting activity by US airlines.

According to Raymond James, “investors may be overestimating LUV's margin expansion potential in a recovery given comparisons to prior periods where Southwest benefited substantially from below market fuel prices". The company added that Southwest "will not benefit in the near-term from the restructuring of weaker players."

AirTran’s shares also gained 0.2% yesterday, as the carrier reported that traffic (RPMs), load factors and enplaned passengers represented a new all-time record for the LCC for the month of September.

The carrier reported a 7% increase in passenger levels in the month, to 1.8  million, with load factor also on the improve, up 2.6 ppts to 77%.

Ryanair continues to grow, with 17% jump in pax levels

Also in Europe, Vueling's shares jumped 6.5%, after initially falling 3.9%, on news that the planned merger between British Airways and Iberia could force the combined entity to bid for the LCC. Alternatively, the combined carrier could also be forced to reduce its holding in Vueling. 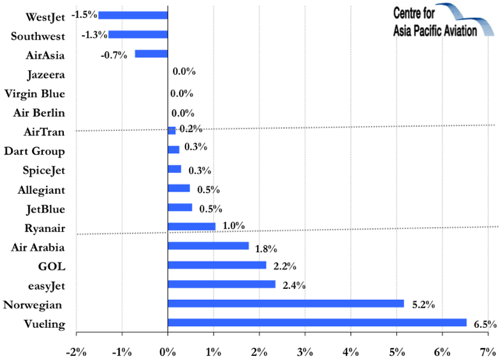