WestJet’s shares were weaker (down 1.4%) yesterday, as CEO, Sean Durfy, stated he is “still nervous” about the general economic outlook for the North American economy, but expects a recovery as early as 2Q2010.

The CEO added that the carrier hopes to “operationalise” an agreement with Southwest Airlines in 2010, and could reach similar agreements with “two to four” other partners soon.

Also in North America, US LCC shares continued their weakness on Tuesday, on continued security concerns, with Southwest Airlines’ shares down 0.2%, and AirTran and Allegiant also weaker (down 0.8% and 0.9%, respectively).

However, of concern for the Brazilian LCC is plans by TAM to focus on attracting first-time domestic fliers with easy payment options, as part of an objective to increase growth levels in the USD6.5 billion Brazilian air travel market.

In Europe, easyJet and Ryanair’s shares gained 1.1% and 0.5%, respectively, while in Asia Pacific region, Virgin Blue and AirAsia were both up, by 1.8% and 1.5%, respectively. For more LCC analysis, please see The Centre’s landmark Global LCC Outlook Report. 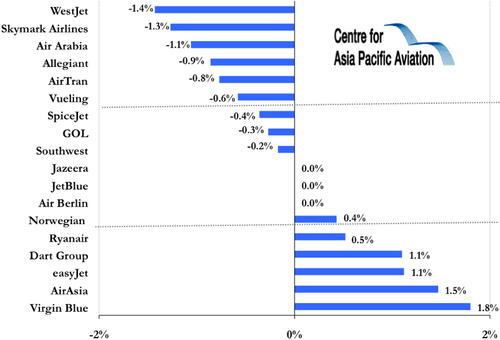