Canada’s second largest airline, WestJet, is making a major bet on the resilience of leisure travel in a post-pandemic world through its planned acquisition of the Canadian tour operator Sunwing, solidifying its position in vacation markets as the recovery in air travel continues.

The proposed acquisition of Sunwing is the latest move WestJet has made to diversify its business. During the past decade its moves have ranged from the creation of its regional subsidiary Encore to establishing its own ultra-low cost carrier [ULCC], Swoop.

Those strategies and others by WestJet were undertaken to ensure that the airline remained competitive in the leisure passenger segment while broadening its reach into the corporate space.

It is so far unclear how Canada’s aviation landscape will evolve as new entrants come online and incumbent operators work to capitalise on the recovery in travel from the pandemic. But the country’s airlines continue to forge interesting combinations to bolster competition in the Canadian market, and some of those tie-ups are already being met with opposition.

During the past decade WestJet has diversified its business in numerous ways, ranging from the creation of its regional subsidiary Encore, operating De Havilland Dash 8s, to establishing its own ultra-low cost carrier [ULCC] Swoop. The company has also added Boeing 787-9 widebodies for long haul operations.

Those moves and others by WestJet were undertaken to ensure that the airline remained competitive in the leisure passenger segment while broadening its reach into the corporate space.

Now, as the COVID-19 pandemic moves into an endemic phase, WestJet is aiming to bolster its position among Canadians who flock to warm weather destinations during the winter months. 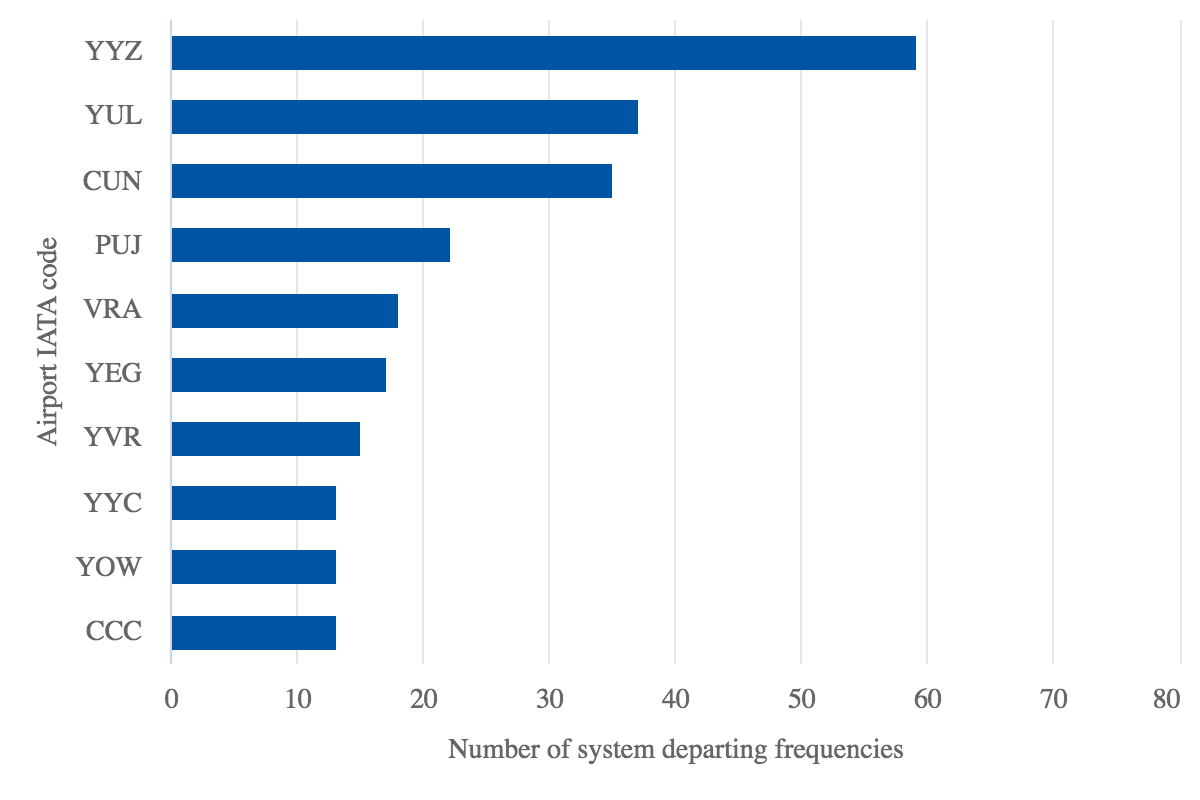 WestJet’s five largest bases, with the exception of Toronto Pearson, are located in Western Canada. 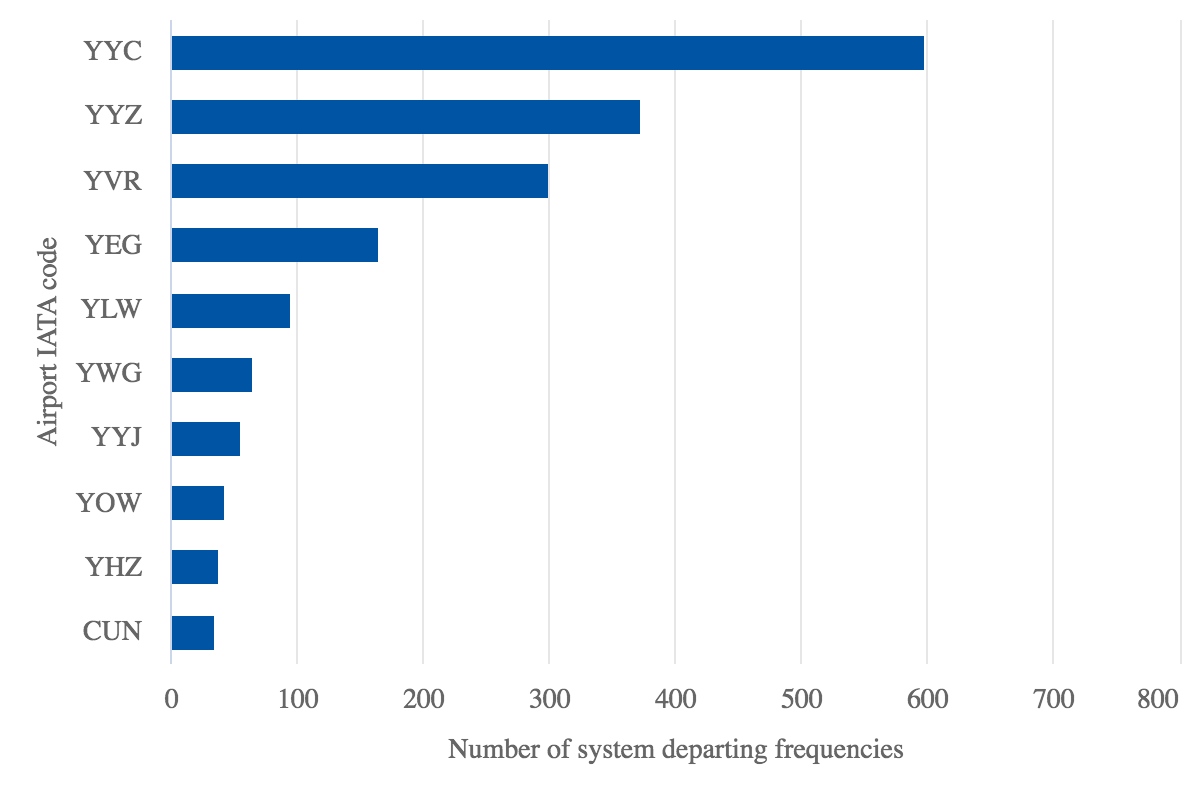 WestJet and Sunwing have the advantage of some fleet commonality

The two airlines have some fleet commonality as both airlines operate both current generation Boeing narrowbodies and 737 MAX aircraft.

CAPA’s fleet database shows that Sunwing has a fleet of 29 Boeing narrowbodies.

WestJet mainline has 94 aircraft in service and 20 inactive.

WestJet has explained that once the transaction closes a new tour operating business will be created under the WestJet Group that will include the vacation businesses of each company, and the new entity will be led by Sunwing’s CEO Stephen Hunter. The current shareholders of Sunwing will become shareholders in the WestJet Group.

The company's CEO Annick Guérard recently told analysts and investors that her company had taken note of the proposed transaction and expected a thorough analysis of the proposed acquisition by Canadian regulators.

"We certainly do not see this as being good news for customers. It will significantly reduce competition in the market, especially in key markets such as Western Canada, where concentration would be very high", Ms Guérard stated.

However, she explained that the codeshare agreement Air Transat has with WestJet had allowed Air Transat to generate more passenger volume in the trans Atlantic market. "Nothing has changed in that regard", said Ms Guérard, adding that Air Transat had had discussions with WestJet "in terms of impact of what they announced in the market. We are reassured at this point that this will not affect our agreement."

More recently, Air Transat and Porter Airlines have announced a new codesharing relationship. The first phase of the partnership will focus on connections from Porter’s bases at Toronto Billy Bishop airport and Halifax to Air Transat’s hub at Montreal Trudeau airport.

Porter, meanwhile, is preparing to launch operations from Toronto, Halifax and Montreal during 2H2022 with the first of 30 new Embraer 195 aircraft that the airline has on order.

See related CAPA report: Flair, Porter, Air Transat to be a force for change in Canada?

The moves by WestJet, Sunwing, Porter and Air Transat show partnerships that may have not seemed logical before the COVID-19 pandemic are emerging as Canada’s existing operators are pairing up to become more competitive, particularly in the leisure space, which has been leading the recovery in most markets worldwide.

All of these partnerships and acquisitions are emerging as two new ultra-low cost operators, Lynx Air and Jetlines, are also working to launch. Lynx is scheduled to make its debut in Apr-2022 and Jetlines is aiming for a launch sometime in 2022.

Those airlines are joining Canada’s existing ULCCs, Swoop and Flair. The initial routes Lynx plans to operate are largely served by Air Canada, WestJet and Flair. Of course, Lynx still needs to flesh out its network, but previously the airline has stated that it is Canada’s new ultra-affordable airline.

There’s an argument to be made that Canada already has its fair share of affordable airlines, but Lynx and Jetlines believe that opportunities for stimulation exist in the country.

Air Canada’s chief commercial officer Lucie Guillemette recently explained that the airline had recognised that “there have been various domestic competitive announcements, and [we] anticipate the competitive landscape will be dynamic.”

She added that the airline believed its strategy of focusing on connectivity through its hubs was a key differentiator, and Air Canada’s main competitive advantage.  “We are in the business of global traffic flows through our domestic markets and hubs”, said Ms Guillemette.

As Canada joins the rest of the world in embarking on a new phase of COVID-19 history, the country’s new and start-up airlines are working to ensure that they are building competitive arsenals going forward.

These moves should result in a dynamic Canadian marketplace in 2022 and beyond.