Flair, Porter, Air Transat to be a force for change in Canada?

As is the case in other areas of the world, there is no shortage of ambition among smaller airlines in Canada working to capitalise on opportunities as demand for air travel in the country starts to rebound.

Flair and Porter Airlines are two prominent examples as Flair ramps up its Boeing 737 MAX fleet and Porter prepares to broaden its reach with Embraer 195 aircraft.

Air Transat is also planning to add some domestic routes during the Summer 2022 timeframe to ensure it captures some of the resurgent demand for travel.

Although Canada’s largest airlines still have the benefit of scale, for now the smaller operators see an opening to grow.

Canada has reopened its border to vaccinated travellers – nevertheless, a negative PCR test 72 hours before departure is still a requirement.

The country began loosening its tight travel restrictions in Sep-2021, and now its borders are open. However, there’s a new push to lift the PCR testing scheme.

With the lifting of restrictions on international travels and the easing of certain domestic travel requirements, Canada’s domestic available seat kilometres (ASKs) are projected to surpass 2019 levels in Apr-2022. 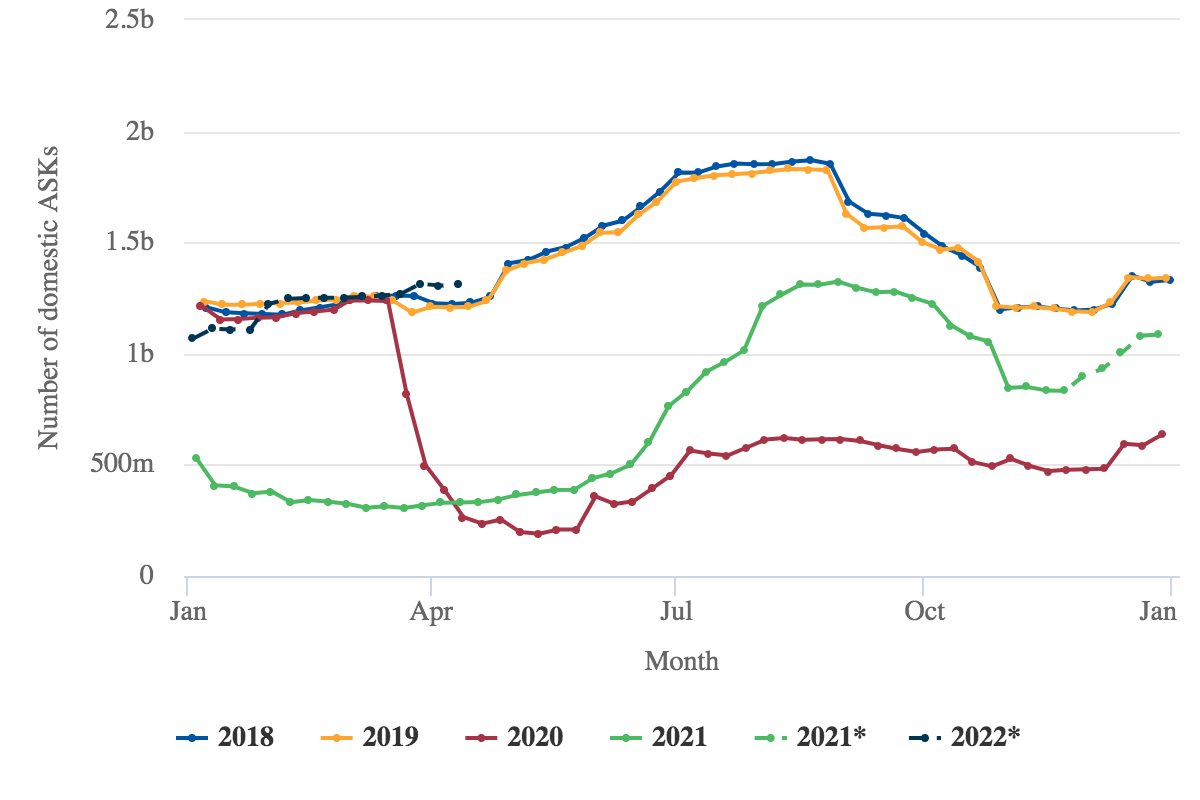 * These values are at least partly predictive up to 6 months from 15-Nov-2021 and may be subject to change.

International capacity will also brush up against 2019 levels during that same period, but the bulk of that growth will stem from routes to sun destinations and on trans Atlantic markets, since the trans Pacific market is expected to be the last to fully recover.

Canada's smaller airlines plan solid expansion for the near future

Executives from Air Canada recently stated that the airline was expecting to operate approximately 53% of its 2019 capacity in 4Q2021, and added that bookings in some of the airline's markets for 1Q2022 had reached 2019 levels.

The news outlet globalnews.ca recently quoted WestJet’s chief commercial officer John Weatherill, who explained that the airline had experienced the equivalent of approximately 11 years of historical growth during the past few months, and expected to deploy 70% of its pre-crisis capacity by Dec-2021.

As both Air Canada and WestJet look to restore their capacity, other operators in Canada’s market are working to position themselves to capture some of the resurgent demand.

The strongly backed ultra-low cost operator Flair Airlines recently announced its schedule in the Northern Hemisphere’s Spring 2022, and stated that its fleet would grow from 12 aircraft to 16.

Flair fleet summary as of mid-Nov-2021

The airline is in the process of adding services to six US destinations in the autumn of 2021, joining the 18 destinations it serves in Canada. Flair aims to grow its total destinations served to 28 in 2022.

Porter Airlines is aiming to launch operations with its new Embraer 195 aircraft during 2H2022. The company has a firm order for 30 of the aircraft, and has stated that the jets will operate from Halifax, Montreal, Ottawa and Toronto International.

Air Transat, meanwhile, has recently released its schedule for the Summer of 2022, and it contains a healthy proportion of domestic flights.

From Montreal, Air Transat is operating services to Calgary, Vancouver, Quebec City, and Toronto. It also plans to fly from Toronto to Calgary and Vancouver.

Although Air Transat explained that some of those flights would provide travellers with access to international destinations from Montreal and Toronto, the company also stated that it was “convinced that the popularity of travel within Canada will still be strong in the summer of 2022,” which is why it is bolstering its domestic service.

Indeed, if the PCR testing requirement remains intact for that long the costs, particularly for families, could result in many Canadians opting to travel within the country.

Given their scale, Air Canada and WestJet will continue to remain the dominant airlines as the Canadian market recovers.

Canadian domestic ASKs by airline, as of mid-Nov-2021 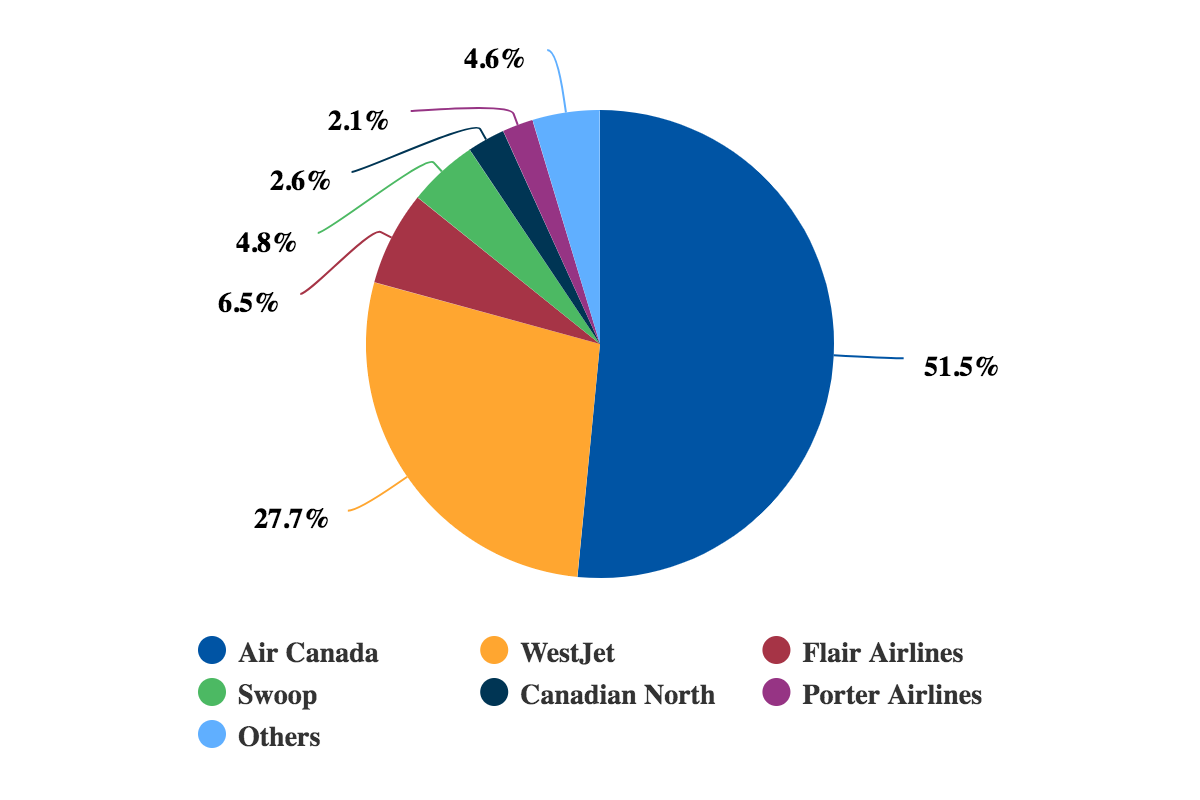 But as Flair, Air Transat and Porter expand domestically, and to US routes and sun destinations, pricing pressure could ensue, which could affect the trajectory of yields returning to pre-pandemic levels.

At the moment Air Canada seems unfazed by the changes occurring in the market.

“We’re not surprised by anything we’re seeing in the marketplace at this point in time”, the company’s CEO Michael Rousseau explained during a 3Q2021 earnings discussion. “The players are very competitive.”

But Mr Rousseau believes Air Canada’s key strengths remain intact, including the airline’s revamped Aeroplan loyalty programme, which, he highlighted, is not just tailored for the business market, but “for the leisure market as well with some of the key features that we’ve added”.

As is the case with large global US airlines, Air Canada believes there is an opportunity for “more permanent premium products for the leisure traveller”, said the airline’s chief commercial officer Lucie Guillemette.

Ms Guillemette explained that Air Canada had worked quite a bit on seat selection, which has been a good source of revenue. The company was also able to “extract good dollars for seat fees in different cabins and also different paid upgrade programmes”, said Ms Guillemette. “We’ve learned a lot during this period, and obviously we’re going to look to retain the products that customers have appreciated.”

It seems that Air Canada is using differentiated products as a tool to maintain and lure leisure passengers with a product somewhat differentiated from that of other low cost airlines.

And its sheer scale – Air Canada still maintains 51% of Canada’s domestic ASKs – does still offer the airline a good deal of leverage. (See chart above.)

...but smaller airlines work to usher in change within the market

The push by some of Canada’s smaller airlines will ultimately be good for consumers and could keep the country’s largest airlines on their toes.

Whether the dynamics of Canada’s airline industry will be dramatically altered is still undefined, but the country’s smaller airlines are making bold efforts to effect change.