US airline stocks were generally weaker yesterday, with Allegiant Air the exception among the listed LCCs, gaining 0.6%. US airline shares have witnessed improved growth over the past few months, with valuations up from year-ago lows. However, the market remains cautious ahead of the release of the US monthly job report - a leading growth indicator for airlines - on 02-Apr-2010.

In the Canadian market, shares in WestJet slipped 0.3%, as the Canadian Transportation Agency, in a preliminary ruling, stated WestJet could be forced to pay more compensation for lost or damaged luggage than its existing CAD250 limit on baggage liability. The LCC stated it is reviewing the decision, but added that it is too early to say what changes, if any, would be made. The airline has the right to appeal the ruling.

In other WestJet news, the LCC is reportedly in talks with Delta Air Lines to form a codeshare partnership, after a similar agreement with Southwest Airlines was put on indefinite hold in May-2009.

He added that the carrier, which currently has agreements with Air France-KLM and China Airlines, wants to add codeshare partners in Latin America, the Middle East and Africa in the future, although no discussions with potential partner airlines have been initiated.

In the Brazilian market, shares in GOL slipped 0.1% yesterday, on the same day the carrier stated it expects ancillary revenues to grow to represent up to 20% of net revenue in 2011. The carrier plans to expand its ‘Buy on Board’ product from 42 daily services to approximately 40% of its daily services by the end of 2011, and expects to grow its SMILES programme client base by 36% to 9.1 million members by the end of 2010. 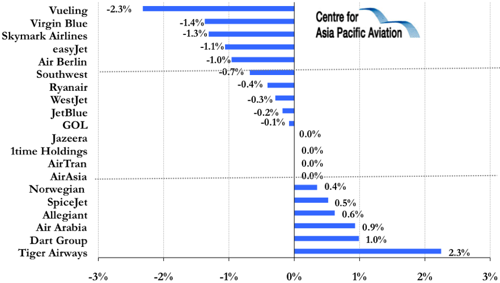