Volcano fallout: Ash Attack hits airlines where it hurts most. USD2bn impact for aviation and rising

Aviation is vulnerable to almost every possible change in circumstances, be it economic, health scares, terrorist attacks – or even – as in the case of volcanic dust clouds over Europe – the slightest change in the wind. This event will be especially costly for airlines, as well as a vast array of affected businesses. What differentiates the Ash Attack from most other negatives is that such events generally cause a sudden drop in demand: Here the problem is a lack of supply, where demand is there.

To make the event even more painful, the airlines are being prevented from earning revenue just as they are recovering from the worst downturn in aviation history. Right now, they need the money.

This distinction is more than academic. For example, after air travel was suppressed by health fears during the SARS pandemic in 2003, there was a sudden rebound in traffic once the scare was over. People who had cancelled flights and postponed their travel now did their best to make up for lost time.

On this occasion, most of the revenue will simply be lost – with many airlines forced to offer replacement flights and meanwhile incurring substantial one-off expenses to try to accommodate displaced passengers.

Then there is air freight, much of it by nature perishable, whether foodstuffs or other high value products. Revenue from this source accounts for usually 10-20% of total income for airlines. Not only will this simply be lost, but airline legal departments will be tied up in compensation claims for months to come.

The airspace closure could generate structural shifts in behaviour

As companies looked to cut back on costs, last year teleconferencing became an increasingly attractive option. The improvement in technology and reduced cost in using this form of communication added to the attraction. At such sensitive economic times, it does not take much to tip commercial behaviour permanent structural shifts. This event will undoubtedly have the teleconferencing lines running hot – and much of it will persist.

Now, even when flights do resume, they are likely to be patchy and uncertain, depending on the conditions in a particular zone; suspensions could be re-applied at short notice. Coming at an extremely difficult time for airlines, it may even be the final blow for some.

Darkness over Europe: Most challenging of all crises

The patchwork nature of European airspace management and regulation, as well as the vagaries of the ongoing eruption, wind directions and layering of the ash at different altitudes combine to make this potentially one of the most challenging shocks to the aviation system, unless it is resolved quickly.

The Ash Attack has already affected the travel plans of 8 million passengers in Europe and around the world, causing at least USD1 billion in lost (and unrecoverable) revenue for the worldwide aviation industry. To this should be added lost ancillary revenues and the costs airlines will incur for re-routing aircraft, as well as caring for stranded passengers and stranded aircraft at various ports. The total cost for the aviation industry (airlines, airports, suppliers, freight operators, handlers etc) could be well over USD2 billion, and rising with each day of disruption.

Beyond the impact on the airline industry and the direct and indirect employment it generates, there is severe dislocation for business, tourism and trade (particularly perishable items and just-in-time stocks for manufacturing). This will have a much broader economic impact, on which the airline industry, in turn, depends. For example, business which rely on just-in-time (JIT) supply chain operations will quickly be out of stock, with further repercussions all down their own supply chain.

Shutting down the skies closes off a vital supply line for the European economy and its global linkages, with global implications, as airlines all over the world cancel their European flights.

European short-haul aviation was already undergoing a structural shift, with business travellers turning away from full service carriers to lower cost alternatives, including LCCs and surface transport. Teleconferencing will undoubtedly be boosted by the Ash Attack.

Just how necessary was this shutdown?

No-one would question for a moment the need to maintain the highest safety levels. But if the massive disruption – economic and social – of the European airspace closure has been driven more by bureaucratic self-preservation than by real evidence of danger, then questions need to be asked.

Lufthansa, Air Berlin and KLM, who have each conducted actual flight trials with no apparent risk, have queried the fact that the decision to close airspace was apparently made on the basis simply of computer modelling. One airline spokeswoman reportedly described this as “scandalous”.

Added to that, such an enormous disturbance of social behaviour will necessarily overflow into other areas of safety. There will almost certainly be a spike in road accidents, deaths will result from non-delivery of urgent medical supplies, and indirect implications will reverberate for months. So it cannot be said that the closure decision was without risk itself.

IATA’s initial and conservative estimate of the financial impact on airlines is in excess of USD200 million per day in lost airline revenues. Airways authorities have not released estimates, but their losses will also be massive. ACI EUROPE stated on Sunday that European airports have lost close to EUR136 million from the Ash Attack.

The Association for European Airlines (AEA) and the airports body ACI EUROPE are calling for the flight restrictions to be immediately reassessed.

AEA Secretary General, Ulrich Schulte-Strathaus, stated, “verification flights undertaken by several of our airlines have revealed no irregularities at all; this confirms our requirement that other options should be deployed to determine genuine risk. For example, the FAA has a world-established process of identifying clear no-fly zones. Airlines must be able to fly where it is safe to fly and make decisions accordingly. It is what our passengers demand of us.”

European airlines, airports, suppliers and handlers share prices were all down on Friday, although at that stage there was little suggestion the disruption would go beyond the weekend. Lufthansa fell 4.1%, Air France-KLM fell 3.4% and British Airways dropped 3.1%. Ryanair and easyJet fell 2.4% and 1.2%, respectively.

Today, markets are likely to savage European airline stocks – unless there is good news. 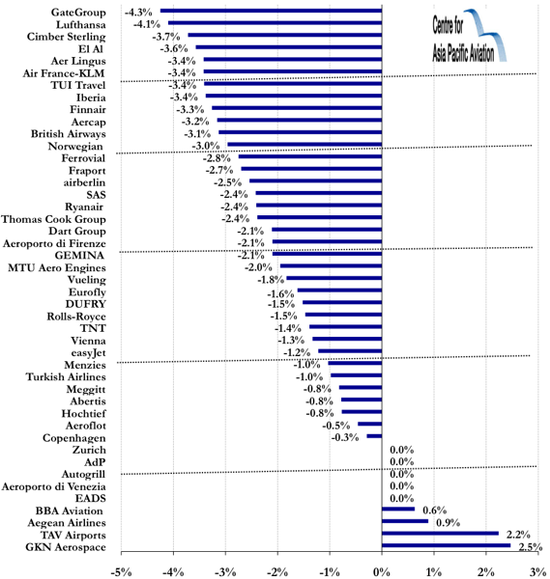