Mexican low-cost carrier Volaris is expanding its international network in 2H2015 with new service from Guadalajara and Cancun to Guatemala. The new routes mark the first time Volaris has ventured into other Latin American markets but are not surprising given its focus on international capacity growth in 2015 and the fact it has looked for several years at expanding south.

Volaris has built up its US transborder network to nearly 20 destinations, and still believes that the market holds vast potential. Volaris is still expanding US transborder service based on the premise that its target VFR passenger sector generates lower levels of competition. But its Mexican rivals Aeromexico, Interjet and VivaAerobus have also been expanding their transborder reach, which is no doubt crowding the market.

The push into international markets by Mexican airlines is driven by still tenuous conditions in Mexico’s domestic market. Although each airline was encouraged with some improvement in yield traction in late 2014 and early 2015, Aeromexico remarked it was working off a low base. The airline at the beginning of 2015 calculated that yields within the Mexican domestic market had been about 15% lower year-on-year during the last 18 months.

At the beginning of 2015 CAPA concluded that with an increasing focus by more of Mexico’s airlines on US transborder service and Volaris’ extensive US network, at some point the airline would need to examine serving other geographies. During the last year VivaAerobus has re-entered the US market, launching service from Monterrey to San Antonio and Las Vegas, Guadalajara and Cancun to Houston Intercontinental and from Monterrey to Dallas/Fort Worth.

Mexican hybrid airline Interjet also has been expanding its US network. It is planning to launch service from Mexico City Juarez to Houston Intercontinental in May-2015.

Volaris to compete against Interjet and Aeromexico in Guatemala-Mexico market

In early 2015 Volaris CEO Enrique Beltranena stated that the airline was planning to open some Caribbean, Canadian and Central American routes, concluding it would be a matter of time before the airline “starts tackling them, and we hope it works pretty well”.

Volaris followed those comments with a mid Apr-2015 announcement of new service to Guatemala from Cancun and Guadalajara commencing in Jun-2015, featuring two weekly flights on each route. The airline faces no competitors on its first international routes outside the Mexico-US market. Aeromexico and Interjet currently only serve Guatemala from Mexico City. Guatemala was Interjet's first international destination and was launched in 2011.

TACA (now part of Avianca) also served the Guatemala City-Mexico City market until early 2013. Currently there are about 3,000 weekly one-way seats between the two countries with Aeromexico accounting for about a 65% share and Interjet the remaining 35%. 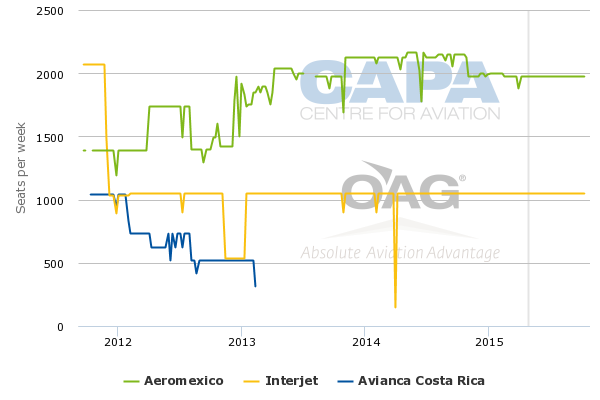 Guatemala seems like a relatively safe bet for Volaris although the two routes it is launching are unproven. Guatemala's GDP is expected to grow at 4% in 2015, which is higher than many South American countries.

Volaris will likely rely heavily on VFR traffic for its new routes to Guatemala, as it does in the Mexico-US market. Volaris could also see strong leisure traffic in the Guatemala-Cancun market and a mix of business and leisure customers travelling from Guatemala to Guadalajara.

Volaris will also have the opportunity to pursue the Guatemala-US market by offering a one-stop product via its Guadalajara base. Such connections could be key in making the route a success, and building up capacity beyond the initial two weekly frequencies, as the local Guatemala-Guadalajara market is relatively small. The Guatemala-US market mainly consists of price sensitive ethnic and VFR passengers, which is also the main target sector for Volaris in the Mexico-US market.

While Guatemala will be Volaris' first opportunity to pursue point of sales in another Latin American country several of its executives including Mr Beltranena are familiar with the Guatemalan market as they previously worked for Central American full-service airline group TACA. The family which owned TACA (and now owns part of TACA parent the Avianca group) is also one of the founding shareholders of Volaris.

There has never has been any commercial ties between Volaris and TACA or Avianca although potential cooperation was explored several years ago shortly after Volaris' 2006 launch when the LCC was contemplating launching international services to Central America. (Volaris instead decided to start with transborder services to the US and until now has been focused on markets to the north rather than the south.)

Diversifying outside of the US transborder market is a key element of Volaris’ evolution, likely accelerated by tenuous conditions in the Mexican domestic market and the additional capacity other Mexican airlines are deploying on US routes. With so much of its planned 2015 capacity growth targeted into international markets, more routes outside the US could be in the offing sooner rather than later. In 2014 roughly 28% of Volaris’ passenger revenues were derived from international routes, and the airline is no doubt looking to increase that percentage.

Guadalajara is a cornerstone for Volaris international growth

Some of Volaris’ international growth in 2015 also stems from a slew of new routes it launched from Guadalajara in late 2014 including Reno, Chicago O’Hare (it already served Chicago Midway), Orlando, Fort Lauderdale and Portland. Among those route it only competes with Aeromexico on service to O’Hare.

On its new services from Guadalajara to Houston and DFW, Volaris is competing with Mexican low-cost airline VivaAerobus, United to Houston and American to DFW. Volaris appears to have a competitive advantage over VivaAerobus for point of sale in Mexico given its commanding presence at Guadalajara. Data from CAPA and OAG show for the week commencing 20-Apr-2015 that Volaris accounts for nearly 50% of ASMs at Guadalajara. 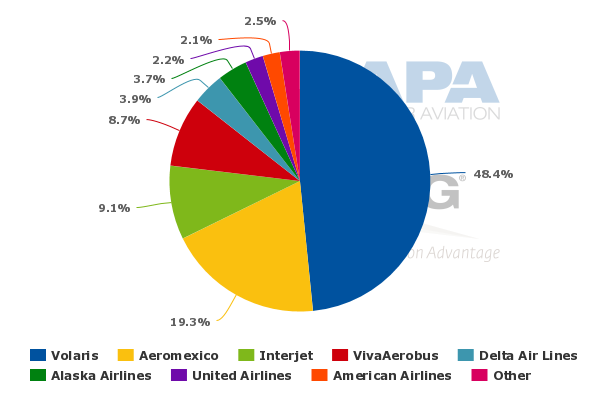 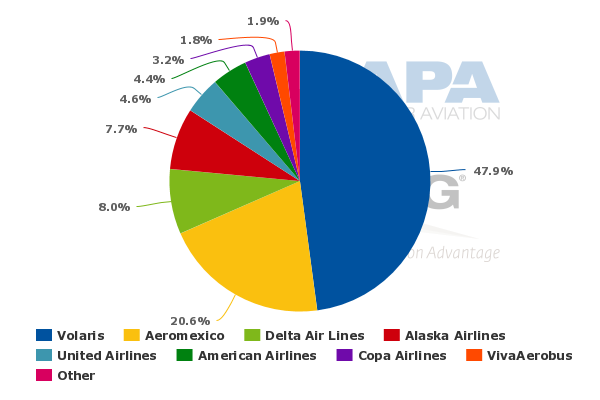 From Guadalajara to Houston, overall seats have increased 26% year-on-year for the week of 20-Apr-2015 to approximately 3,280. Volaris holds about a 15% share and VivaAerobus represents a 14% share of the seats. United accounts for the majority at 72%.

Between Guadalajara and DFW, seat numbers have grown roughly 5% to approximately 2,400. American holds a 82% share, but its seats have dropped 15% year-on-year. Once Volaris starts flights on the route in late Apr-2015 it will offer 432 one-way seats compared with 441 from VivaAerobus.

Volaris has also expanded domestically from Guadalajara during the last couple of years. It currently accounts for approximately 50% of the domestic ASMs at the airport. This will enable Volaris to build some connections through Guadalajara to the US and now Guatemala. 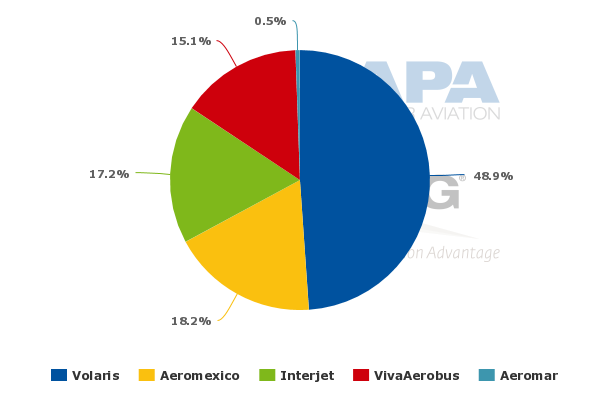 Guadalajara will continue to be key to Volaris’ strategy given it is Mexico’s third largest airport and the country’s second largest city. It is home to manufacturing facilities of several international firms. Based on data from CAPA and OAG for the week of 20-Apr-2015 to 26-Apr-2015, Guadalajara is a very close second behind Mexico City among Volaris’ top bases. 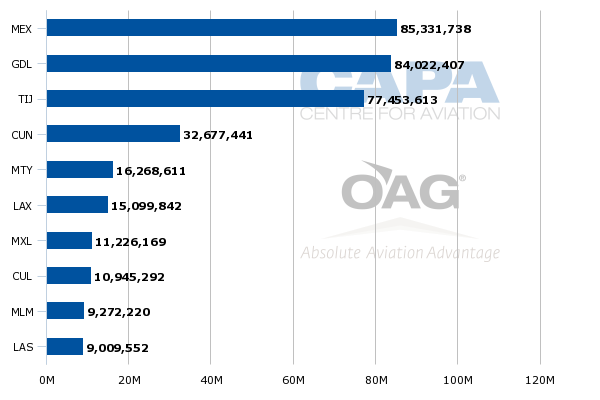 Volaris could create new market dynamics in the international space

Volaris’ debut of flights outside the US transborder market was a given at some point in time. Growth in the airline’s domestic and US routes has been in tandem during the last few years. Even as much opportunity remains in the US transborder market, opportunities also abound for Mexican low-cost carriers to expand service into untapped markets in Central and Latin America and the Caribbean.