Shares in Virgin Blue rallied 5.1% on Friday, taking back some recent losses related to regulatory moves to prevent the carrier’s efforts to form alliances with Air New Zealand and Delta Airlines.

Virgin Blue and Etihad Airways have criticised Qantas’ calls for the Australian Competition and Consumer Commission (ACCC) not to fast-track the approval of the carriers’ proposed alliance.

In a submission to the ACCC, Virgin and Etihad stated bowing to Qantas’ requests would be to the detriment of passengers. The carriers also dismissed Qantas’ concerns over changing market dynamics and comments that Virgin and Etihads’ submissions lacked detail and argued V Australia would suffer if the alliance was not approved. The Australian Federation of Air Pilots also announced its support for the proposed deal, stating it would strengthen the group and requested the ACCC examine the potential “consumer and competition outcomes on employment opportunities in Australia” from the agreement.

Virgin Blue CEO John Borghetti added that the carrier will go to any lengths to convince regulators to approve its proposed alliances with Delta Air Lines and Air New Zealand. Mr Borghetti said the preliminary rejections from US Department of Transport and the ACCC were “very disappointing”, but he believes the carrier has a “very strong case” for the alliances. Virgin plans to discuss the Air New Zealand deal with the ACCC in the next two weeks.  Mr Borghetti also commented that he would be surprised if Virgin’s proposed alliance with Etihad Airways also gets knocked back.

Also gaining on Friday were shares in EVA Air and China Airlines, with gains of 6.8% and 5.5% respectively, reflecting general gains in the market. Taiwan’s Tourism Bureau on Friday reported a 20% increase in total visitor arrivals to Taiwan in Aug-2010 to 442,235, driven by double-digit growth from Asia. Visitors from mainland China were the largest source for visitor arrivals, with growth of 47% year-on-year to 118,616 visitors. The next largest market were Japan (+13.8% to 91,613)  and Hong Kong/Macau (+11.7% to 81,600). 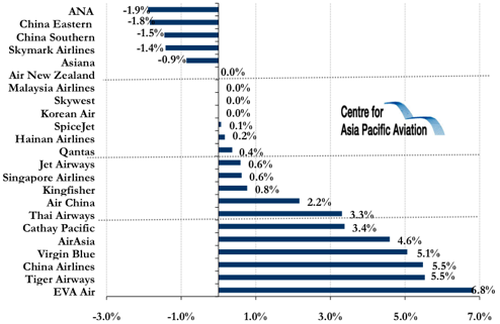