Tiger, which earlier this year sold its stake in Tigerair Philippines and exited the Indonesian market with the suspension of services at Tigerair Mandala, is now focusing on turning around around its Singapore operation. But the Tigerair Australia brand will be retained and the Tigerair brand is also now present in Taiwan, where the group owns only a 10% stake in recently launched Tigerair Taiwan.

The biggest benefit to Virgin could be appeasing its shareholder Singapore Airlines (SIA), which is set to increase its stake in Tiger Holdings from 40% to at least 55%. The agreement could also see Tigerair Australia operate short-haul international routes. Previously Virgin and Tigerair showed no interest in such deployment of Tigerair as Tigerair Australia, which has been consistently unprofitable since launching services in 2007 and has been focusing on improving its performance in the domestic market.

Virgin Australia reported on 17-Oct-2014 an 18% reduction in losses for the quarter ending 30-Sep-2014 (1QFY2015) to AUD45 million (USD39 million). This is Virgin's first quarterly announcement, and the abridged statistics do not include revenue or cost figures. But Virgin said revenues increased by 1.3% (faster than the 0.8% increase in passengers; RPKs not disclosed).

CASK increased by 1%. This is an unwelcome continuation of Virgin's cost base growing, but is small and Virgin was at pains to stress cost saving measures were not reflected in the quarter. Virgin saw a 0.6% increase in ASKs for 1QFY2015.

This was the first quarterly report from Virgin Australia (and indeed, any current Australian airline), issued to align itself with its airline shareholders. This more simplified report included underlying and statutory costs as well as operating statistics, but did not include the half-year and full-year metrics of revenue, costs or yields or any of these figures by segment (domestic/international).

The 1.3% increase in revenue provides only some comfort as revenue growth was faster than the 0.8% increase in total passengers, but this comparison is not the most accurate. Virgin did not disclose system RPK changes for 1QFY2015, although it did disclose domestic RPK changes (down 0.6%). System load factor decreased 0.3ppt.

Virgin stressed the first quarter is the weakest, and that there continues to be weakness in consumer demand. Capacity increases in recent years have been exceptionally high. A more serious weakness in the consumer environment would have a severe affect on the capacity growth that has occurred in Australia.

The quarter saw an AUD8.2 million (USD7 million) restructuring change and AUD14.3 million (USD12.5 million) hedging ineffectiveness cost. Virgin reports its CASK increased by only 1%. CASK growth has been a closely watched topic as Virgin's "game change programme" has significantly increased its costs at a time Qantas is looking to reduce its costs.

Virgin had 0.8% ASK growth, but still has much room for improvement from previous performance peaks

Virgin is being helped by subdued capacity growth, with overall ASKs increasing 0.8%, including 0.6% in its core domestic market. (Domestic comprised 63% of system ASKs in 1QFY2015.)

But this is still not enough, as domestic RPKs decreased 0.6%, leading to a 1ppt decrease in load factor. 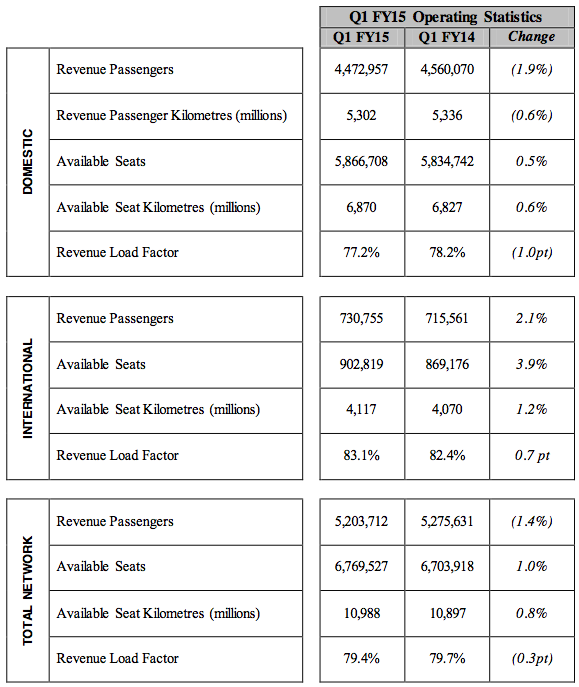 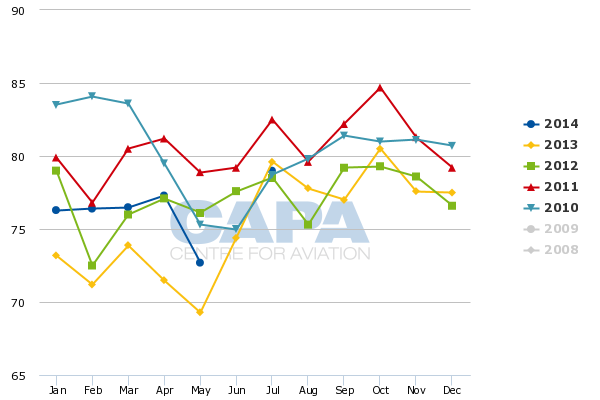 Source: CAPA - Centre for Aviation and OAG
Note: Jun-2010 data not yet available

Domestic capacity is easing but is not a universal story

Virgin's 0.6% domestic ASK increase is not a universal story. There are still large variances in specific markets as Virgin adjusts capacity, meaning the domestic average comprises markets making improvements, those still improving and those in need of further developments – which may hinge on medium- or long-term changes, like aircraft and product substitutions, that cannot be made immediately.

Across all carriers, the Melbourne-Sydney route (Australia's largest, and one of the world's largest) saw a 2.4% decrease in ASKs in Jul-2014, the latest month for which BITRE data is available. This has seen the route fall below Jul-2012 capacity too, but is still 15% above Jul-2010 levels.

(This BITRE data has metrics including passengers, flight sectors, RPKs, ASKs and on-time performance and has recently been incorporated on CAPA's Australia country profile under the "Domestic Traffic" tab.) 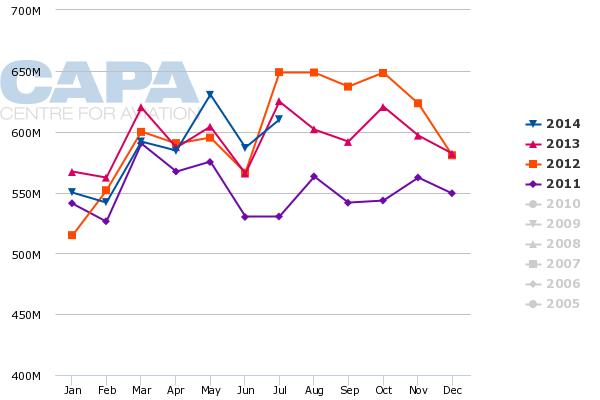 East-west markets have been a particular challenge as a surge in capacity occurred as the resource boom around Western Australia trickled off and carriers were unable to stimulate leisure traffic given the limited population, long distances equating to high fares and high cost of travel in the region. 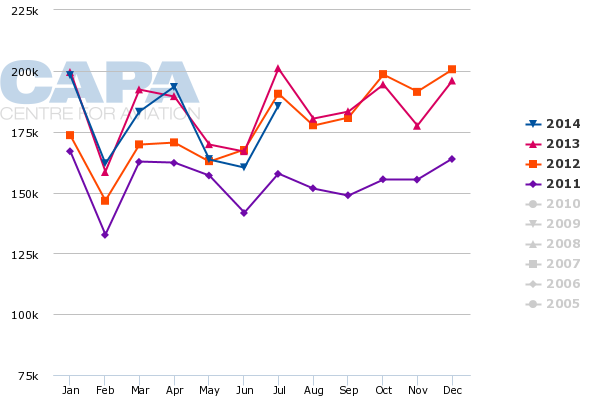 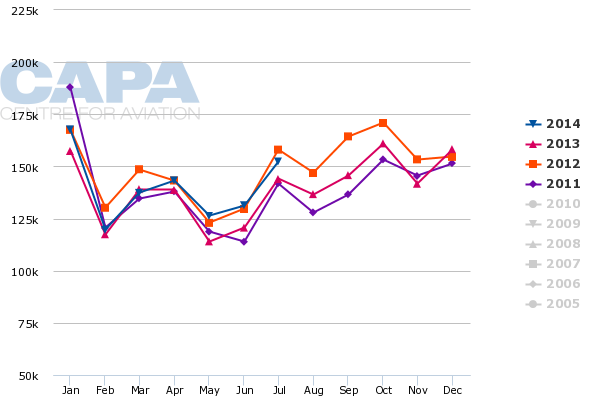 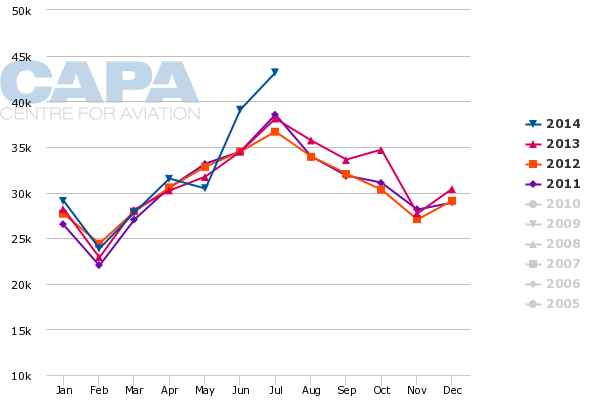 Virgin Australia's domestic ASK change for Q2 forecast to be -0.4%

Based on schedules filed with OAG, Virgin plans to have a 0.4% decrease in ASKs in 2QFY2015. Jetstar and Qantas plan for larger 2% to 3% decreases while Tigerair will increase by 20%, albeit from a low base.

Virgin Australia to buy remaining 40% of Tigerair Australia for AUD1

Virgin's share of Tigerair's losses was one-fourth Virgin's own loss despite Tigerair having one-tenth the ASKs of Virgin Australia. This under-performing is getting worse, but Virgin has proposed acquiring from Singapore's Tiger Holdings the remaining 40% of Tigerair Australia that Virgin does not own. This would come for a token sum of AUD1 (USD88 cents).

Tiger Airways Holdings included in its earnings report for the quarter ending 30-Sep-2014 (1QFY2015) a SGD59.8 million (USD47.8 million) write-off relating to its divestment of Tigerair Australia. Virgin expects to close the transaction by the end of 2014.

Tigerair has been looking to clean up its unsuccessful JV strategy, exiting its now closed operation in Indonesia and effectively exiting the Philippines with a sale to Cebu Pacific. Tigerair had retained its Singapore operation, Taiwan start-up (which launched in Sep-2014) and until now its minority interest in Tigerair Australia. Tigerair initially sold a 60% stake in Tigerair Australia to Virgin in mid-2013.

Tigerair can no longer afford Australia's losses and expected them to continue. Australia has become strategically insignificant as Tigerair's pan-Asia strategy has fizzled, although the synergies between Asia and Australia were never great to start with. For some time, the only group link between Asia and Australia was Tigerair's (Singapore) service from Singapore to Perth, but this is being cut. Tigerair needs to focus on turning around its Singapore operation, which has been unprofitable due to overcapacity.

The interest from Virgin Australia in wholly owning Tigerair is unclear. Virgin already had majority ownership, and purchased its 60% stake with cash injected into it from SIA. SIA was a minority shareholder in Tigerair and is increasing its stake in Tigerair from 40% to at least 55% as part of a rights issue announced on 17-Oct-2014.

SIA is one of Virgin's equity stakeholders but arguably one of the more important ones strategically. SIA for its part will still indirectly stomach part of Tigerair Australia's losses (albeit now a smaller share) but the far greater value to SIA is order at Tiger Holdings and nearly bringing to a conclusion the ungraceful chapter that has been its short-haul LCC project.

Tiger Holdings will now be concentrated in Singapore (with a smaller operation in Taiwan) as SIA will have greater ownership of Tigerair, leading to further questions if SIA will take the plunge and integrate Tigerair with Scoot once Tigerair does more housekeeping.

Virgin Australia CEO John Borghetti in a statement said: “We remain committed to maintaining the airline’s low cost business model and the separate Tigerair brand". Virgin said it had secured "brand licensing and certain services which will continue to be provided by Tiger Holdings direct to Tiger Australia."

Tiger Holdings shed a bit more light, saying Virgin would continue to use the central Tigerair website distribution and branding for Tigerair Australia. Licensing terms were not disclosed. Curiously Tiger will licence its branding despite having zero direct control over Tigerair Australia. However, Tiger is likely to appreciate whatever licensing fees (likely small) it can get. There have been ongoing rumours of a re-branding of Tigerair Australia, but the licensing statements, and reference to them being "long-form", indicates the brand may stay.

Virgin said as part of the transaction it had secured the right to deploy Tigerair on short-haul international sectors. This had not been known to be an issue before, and Virgin and Tigerair had not expressed interest in using Tigerair internationally. However, Tigerair could take over short-haul leisure international routes that have become challenging for Virgin. As CAPA previously wrote:

Virgin Australia attributed its larger international loss to Southeast Asia, which has seen a rapid influx of leisure capacity. Virgin serves just two points – Bali Denpasar and Phuket – but these are very much the focus of increased capacity.

Bali and Phuket have been impacted by an increase in capacity from Asian carriers, notably low-cost carriers that have a lower cost base through their Asian geography but also (in the case of AirAsia X and Scoot) through widebody usage, lowering unit costs. At the same time, Virgin's cost base has increased. AirAsia X and Scoot operate widebodies near their certified maximum while Virgin has a medium density on its narrowbodies, which can be further hampered by having to block seats in order to fly non-stop.

It is difficult to see Virgin maintaining its Southeast Asian network as is. It is small but with disproportionate impacts. Virgin now has the opportunity to deploy Tigerair on these leisure routes. Its lower cost base is more appropriate but Virgin so far seems inclined to restrict Tigerair to the domestic market. Tigerair had previously been legally confined to the domestic market as Australian airlines can fly internationally only with majority Australian ownership; Tigerair was 100% foreign owned until Virgin took a 60% stake.

However, Tigerair is going through its own changes. A shift from domestic to international is premature while the foundation is being bedded down and the brand is revitalised.

Virgin said it aimed to make Tigerair Australia profitable by the end of 2016, although this will likely be done with reduced aircraft given the increasing losses. Virgin hinted that Tigerair Australia could reduce its current fleet of 13 A320s.

Tiger Holdings said it is assuming some commitments from the Tigerair Australia order book of six additional A320s. But Tiger did not say when these deliveries are slated for and how many it has agreed to take over as part of the new deal with Virgin.

The six A320s that are currently assigned to Tigerair Australia in the Airbus order book were not included in Tiger Holdings' early 2014 deal with Airbus which cancelled remaining A320ceo orders in exchange for 37 new A320neos for delivery from 2018.

See related report: Tigerair Australia to pause from growth – with possible A320 deferrals – as losses continue to mount

Outlook: domestic is an issue, but so too is international

Virgin has been impacted by the exceptional growth in the Australian domestic, but is making initial – although arguably still conservative – steps to address this. Left unturned is Virgin's international network, the annual losses of which were disproportionately higher due to short-haul routes.

Virgin may be able to address this segment with Tigerair, but even then Tigerair's focus is likely to remain as a domestic story. While Virgin must continue to clean up its own house, Tigerair's losses will drag down any improvement at the Virgin brand.